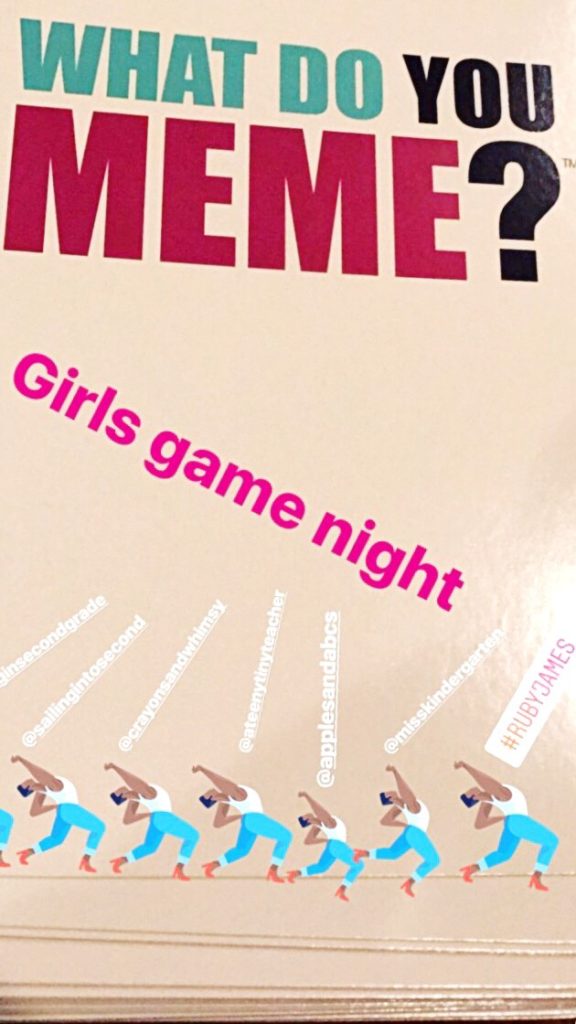 Oh my word.  People.  Last weekend, I went to Hadar’s (Miss Kindergarten) for a Girl’s Game Night.  There were eight of us and I’m going to list them here in a bragging, I know these girls in real life, I play games with them, sort of way.  😉

It was Hadar, Aris (Sailing Into Second), Christy (Crayons and Whimsy), Jen (Sparkling in Second Grade), Layla (Fancy Free in 4th), Michelle (Apples and ABCs) and me.  Layla put the picture above on her Instagram story and I stole it!  🙂

We had some yummy snacks, which you know I’m all about (a game night, a get together, a gathering, a what-have-you, must have snacks in my book) and some adult beverages, and then we played this What Do You Meme game.

And maybe you didn’t know this, maybe you’re new to my blog, but I am what you call NOT a millennial.  Not even close.

The person who got to go first was the person who had the most Instagram followers (and those followers could not be bought). If that’s not a millennial thing, then I don’t know what is.  I’m from the generation where you had a Kodak throw-away camera and you dropped it off at the picture place and you were thrilled when it was ready IN JUST ONE HOUR and you checked your pictures to find out you’d only closed your eyes in two of the twenty-four roll.

Thank goodness Christy was there because she is not a millennial either.  We joined forces and put our two Generation X brains together to try to defeat all of the millennials at the table.  It was six people versus the two of us.

This card game is sort of like Cards Against Humanity, at least that’s what they kept saying, but I’ve never played that game so I don’t know.  But we had seven caption cards to choose from to match a picture (or meme), we all put in the card we thought was best, and then the “judge” (which rotated) decided which one SHE liked best and if it was your card, then you won the round.

Some of the sayings I didn’t get whatsoever at all because I am old.

But this old lady had a fun time so there you go! 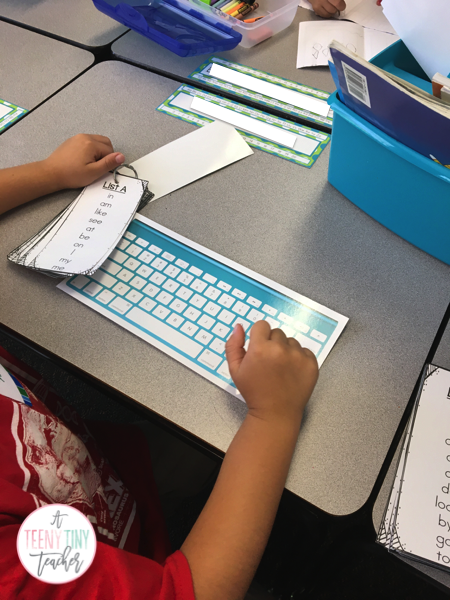 This is one of my FAVORITE early finisher activities!  Okay, it’s also pretty popular with my kids, too.  😉  I bought THIS KEYBOARD CLIP ART on TpT and just inserted it into a Power Point document.  The pack has a TON of colors and I opted for turquoise because I’m obsessed.  Any-hoo, I printed them out on card stock paper, laminated them, and stuck them in our desk caddies.

Back to the keyboards — they are in the desk caddies along with our sight words on a ring (and other things that I will heretofore blog about) and my kids LOVE them.  They practice “typing” sight words, spelling words, their names, the letters of the alphabet, my name, etc etc etc.

It is SO FUN and it’s meaningful and it’s great practice and they are kind of addicted.

This is the first year I’ve had them and now I feel bad for all of my classes in the past.

I especially feel bad for my first class EVER back in 1997 because I honestly don’t think I taught them a darn thing other than their teacher didn’t know what she was doing.  Seriously.  If they ever made it to college, or somewhere in the real world, I hope they know how to read by now because I sure didn’t teach them.  But that’s neither here nor there.

So anyway!  Keyboards!  On paper!  Try them! 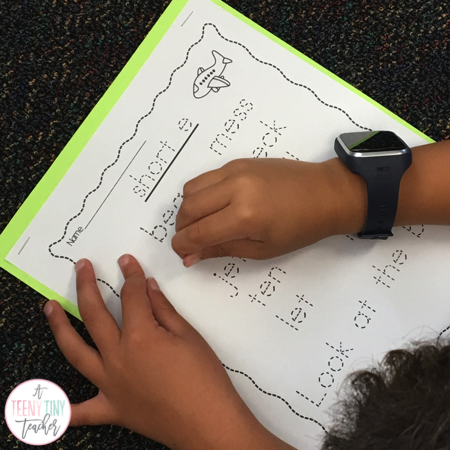 I brought out the pushpins this week!  Some of my kiddos lack fine motor skills and since most kids absolutely LOVE pinning, I opted for this fun and safe activity.

Well, it was no surprise to learn that THIS CLASS loves to pin, as well.

As in just to be CLEAR, I’m here to tell you that teeny tiny colorless pushpins being handled by kids lacking fine motor skills of any kind are PERFECTLY SAFE in case you were wondering.

I had everyone take the Pinning Pledge which goes something like this:

Raise your right hand.  Okay, your left works, too.  No, this is my right hand, it’s just that you’re sitting in front of me, no the other hand, stop, no, okay, it doesn’t matter, really, who cares, just raise any hand and repeat after me, no, no, no, I’m not taking any questions right now, that’s great you did this in kindergarten, no, I didn’t know you stepped on one of these at your house, ouch, I’m so glad you’re fine, you’re really tough, exactly, it doesn’t matter which hand, really it doesn’t, JUST ECHO ME, FOR PETE’S SAKE!

I will only poke the pin in the paper.

I will NOT poke my friends.

I will NOT poke my clothes.

I will NOT poke Mrs. Oldham.

I will NOT PRETEND to poke my friends, my clothes, or Mrs. Oldham.

I will NOT poke myself to see if it hurts.

I will only poke the pin in the paper.

Then we started pinning our short e spelling/phonics words for the week.

AND IT WAS QUIET.

And every teacher said “aaahhhh”.

Well, of course, no one finished.  It takes a long time (another BONUS) so I said just keep it in your desk and I’ll keep the pushpins out if you have extra time later today or tomorrow.

And that’s when the DRAMA happened.

Because LOOK what was inside the little tray of CLEAR pushpins. 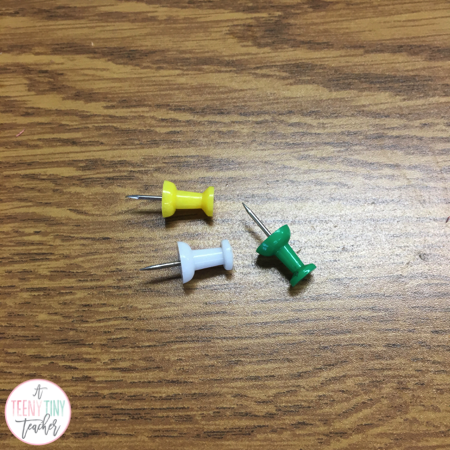 Amongst all of the clear pushpins were these three COLORFUL pushpins.  YELLOW!!  GREEN!!  WHITE!!

It might as well have been COLD!! HARD!! CASH!!

Or a Fidget Spinner or WHATEVER KIDS LIKE THESE DAYS AT THIS MOMENT IN TIME IN MY LIFE OF TEACHING FIRST GRADERS.

I had to remove them from the tray because OH MY WORD, THE DRAMA.

I’m happy to report, though, that no one was poked.  Even WITH all the drama.

Then I did what I should have done YEARS AGO, and I hopped onto my Amazon app and ordered a class set of the Jumbo pushpins.  Supposedly, it was only $7 for 25 of them but it comes in a set of 4 which means I might get 100.

I KNOW!  I don’t know.  I was confused and I was tired what with all the YELLOW!  GREEN!  WHITE! drama happening so I read a couple of questions in the comments and, sure enough, everyone says you get 100 so I’ll keep you posted. 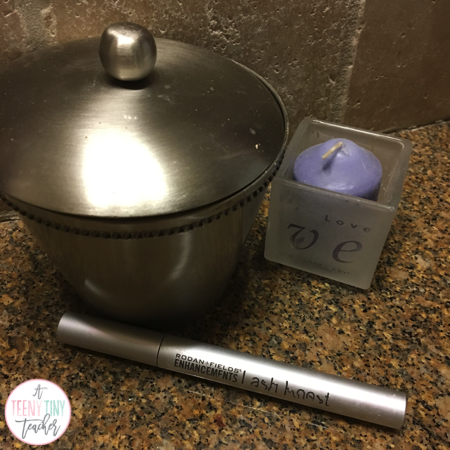 I heard I was supposed to want longer lashes so I started wanting them.  I succumb to peer pressure pretty easily.  Then I heard I could get them using Rodan and Fields Lash Boost.  So I bought it.

And I used it every night.

And I felt like my lashes were getting longer BUT NO ONE WAS COMPLIMENTING ME ON MY LASHES so maybe not.

Meanwhile, in the past few weeks, I have been having MAJOR contact lens issues.

And you know I’m blind.  And I lose contacts.  And I have issues all the time.

But this was different.

These issues were happening AS SOON AS I POPPED MY LENSES IN.

Usually, the very first part of the day is when my lenses are the most comfortable and clear and perfect.

But recently, I would fight with them ALL MORNING LONG and then INTO THE DAY and then I was just taking them out as soon as I got home.

It was TERRIBLE.  I would pop my contact lenses into my eyes first thing AND IT WAS BLURRY.  Like there was a FILM on them.  So I would scrub and rub and rinse and on and on and on and I was SO FRUSTRATED.

Last week, I got to the point where I told Steve I was pretty sure I had torn a retina or two (or maybe seven!), or that I had glaucoma now, or that maybe my eyes had been chemically burned without me knowing, and I was ready to call the eye doctor to find out that I had a terrible unknown eye disease that only happens once every sixty years when it finally HIT ME OUT OF THE BLURRY BLUE SKY.

COULD LASH BOOST BE THE PROBLEM?

Meanwhile, I couldn’t tell Steve any of this because he is not a fan of Rodan and Fields and thinks I’m wasting my money because I STILL have wrinkles whether I use their stuff or something over the counter, and how I AM SUPPOSED to have wrinkles because I’m older now, and this is called LIFE, and GROWING OLDER TOGETHER, and BLAH BLAH BLAH, I just tune him out and buy it anyway.  Actually, it’s automatically ordered and just appears on my doorstep so there.

I went one night without Lash Boost AS AN EXPERIMENT.

I popped my contacts in the next morning and IT WAS A MIRACLE.

But I am no longer growing my lashes, either.

In hindsight, I’m pretty sure no one complimented me on my longer looking lashes because they were afraid to look me in the eyes directly, what with all the redness and blinking and twitching. 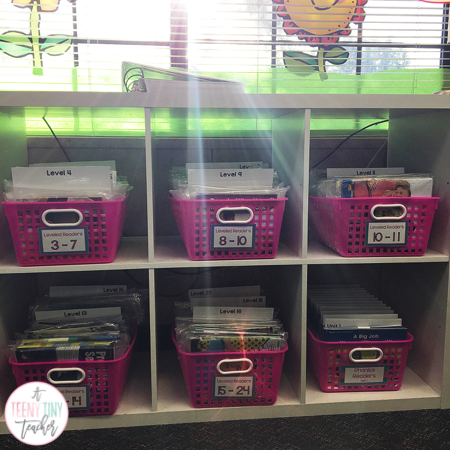 Is it just me or is the light streaming in through the windows on my new and organized Benchmark Advance leveled readers actually SUNSHINE RAYS FROM HEAVEN AND ALL OF THE ANGELS SINGING?  Or is it all the teachers everywhere swooning and fainting? 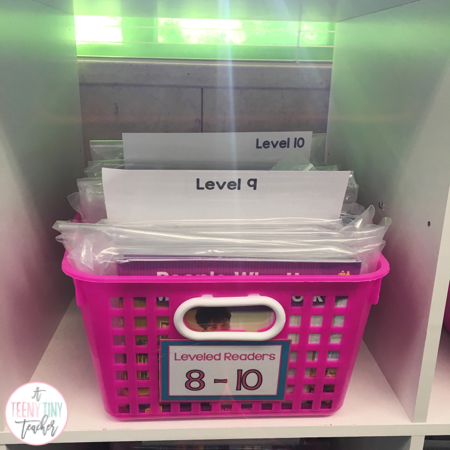 LOOK AT THAT BEAM OF LIGHT!!

Last week, I shared how I spent the better part of an hour and a half with my team reorganizing the way Benchmark sent their leveled readers to us.  One thing I would like to point out is that Benchmark had each set in its own baggie which is amazing, and I truly appreciate that fact, but I did not appreciate all of the levels being mixed up within each unit.

Also, just in case you were wondering, I have only ever been in two schools and two districts throughout my 21 year career and both used NUMBERED leveled readers.  I’m used to Level 1 through Level 24.  That is all I know.  Twenty-four levels.  No letters.  Just numbers.

Benchmark Advance likes Lexile levels and Letter Levels and even has C/3 on the same book which is a LETTER/NUMBER COMBO.

All of that is to say that I did not fool with letters or Lexile levels because with all the Benchmark stuff I am having to navigate my way through, the last thing I need to bother with is retraining my brain to equate letters and Lexiles with numbers WHEN IT REALLY ONLY MATTERS THAT I AM TEACHING READING AND THAT KIDS ARE LEARNING TO READ AND LIKING IT.

I used the numbers.  C/3 is LEVEL THREE to me and that’s just all I need to know.

I divided up the levels with laminated labeled card stock and I am in HEAVEN!

I have a leveled library (for guided reading only — my classroom library is not leveled in any way shape or form because I want kids to just LOVE READING) in my own classroom!

The only issue I’ve come across at this point is that I don’t have any Level 1 or 2 books and I have kids that are at that level so I do have to go to another room for those books.

I’m praying and wishing and working and hoping and teaching  that we’ll move past those pretty quickly, anyway.

And there you have it!

A BRIGHT AND SHINY CLASSROOM LIBRARY WITH THE SUN SHINING DOWN.