Well, hello there!  Thanks for coming back and accepting my apology about the Morning Work Fiasco of 2011.  I’m still thinking long and hard on what to do and how to do it.  So stay tuned.  I hope most of you are just like me.  You go blog stalking and something says it’s free or it’s implied or it’s FREE,  and so you just click and print.  But you weren’t DYING to have my Morning Work.  You just thought it might be nice to click and print AGAIN.

Today was a good day.

First, and foremost, we got a new custodian.  He is really friendly and nice.  For example, he asked me how long I had been teaching first grade.  When I replied, “Fifteen years,” he fell over and passed out. He JUST DIDN’T BELIEVE IT.  I had to wave smelling salts  Elmer’s white glue in front of his nose.  When he came to, he asked if I started teaching when I was TEN.  Move over, Edward, I’m crushing on someone else.  Welcome to our school!!  What’s your favorite treat??

We started learning about Native Americans in Social Studies this week.  I LOVE SOCIAL STUDIES!!!! (anybody with me?)  Earlier this week, we discussed different types of homes that Native Americans lived in and then we each made a teepee.  I didn’t take pictures but they turned out well.  They weren’t fancy . . . not made out of tortillas or other edible items . . . just construction paper.  I thought my kiddos understood the whole lesson and the meaning behind it (some Native Americans used teepees because they were easy to move from place to place) but I don’t think so.  While I was stapling one little boy’s teepee, I heard little voices singing the Happy Birthday song.  When I turned around, gobs of students had their teepees on their heads.  As birthday hats.  Yes, happy birthday to yooooooou.

Today, we learned all about how Native Americans got their food.   The boys were thrilled about the hunting and the fishing (insert “bows flying through the air” sound effects and a teacher voice saying “knock it off  save it for recess”) but we concentrated on the THREE SISTERS.  And how the three sisters represent corn, beans, and squash.  We read some stuff (some parts of books that were above their heads and some other little snippets I found online – I am seriously thinking about writing my own little diddy) and then we got busy.  I gave the kids a bunch of different beans, along with corn kernels and pumpkin seeds.  After telling everyone we couldn’t EAT the supplies and/or STICK THEM UP OUR NOSE or IN OUR EARS (don’t worry, there is no story.  Not this year, anyway!), I told them they could design anything they wanted using the Three Sisters (well almost anything.  I did say no to angry birds.  Something tells me the early Native Americans didn’t play that game).  I told the kids to draw with pencil first and then start gluing.  We used brand new bottles so it was a piece of cake.  Now I feel like throwing them out so I can get some new bottles for the next project (whenever that might be . . . two years from now?).

Here are some GREAT samples.  I think these kids are new to my school because they actually have some Art Skills.  And we don’t “Do Art”. 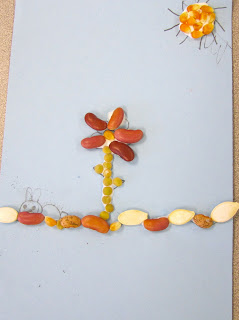 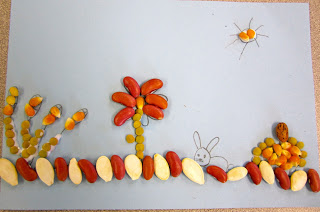 Here are some other samples. 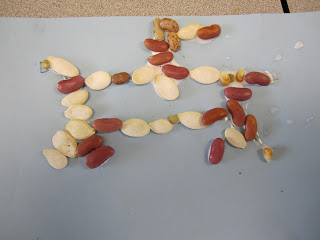 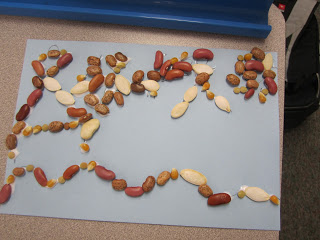 Hey, it’s not their fault I can’t teach art every day, or even every week, and that we don’t have Specials.  I like them.  They’re real.  And they practically copied my own samples bean for bean!!
I hope this gives you an idea to use if you teach Native Americans.  It doesn’t come with a freebie.  Just go buy a bunch of beans, corn kernels, pumpkin seeds and cut some paper.  Oh, and don’t forget the brand new bottles of white glue.  There.  See?  The idea is a freebie.  🙂
Happy Friday to you!!!  And especially to me because I am off ALL NEXT WEEK (Monday through Wednesday are Furlough Days).  Hooray!  I am wearing my teepee hat to celebrate!
PS  Who watched Survivor???
« Don’t Go Away Mad
Spin-off »