I had every intention of blogging yesterday for my weekly Five for Fraturday catch-up.

I mean, I even got up at 7am to work out .  Yes, that’s right.  I’m on a roll and I can actually walk, and sit down, and navigate stairs without feeling as if I’m ninety-seven years old.  That’s called progress, people.  And then I took Murphie on a walk.  And it felt like the whole entire day was in front of me and I had so much time to do anything I wanted.

But first, I went to Target.

Which took up a lot of my time because, as you know, one cannot just run in real quick-like to Target.

I spent a lot of time looking for student gift ideas.

We have Open House this week and for years and years, I’ve always ordered balloons for my students.  But, this year, our principal is asking us to kind of scale back a little because our school goes all out for Open House which means we’re mostly grumpy in the weeks leading up to it, and anything extra that is put on our plates, such as time to fill out end of the year awards or please make a class poster for Relay Recess or be sure to give us your wish list for the book fair leads us to whine and complain and say in unison BUT WE ARE GETTING READY FOR OPEN HOUSE, HELLO?!

Our principal is wonderful and she worded stop the madness in a very professional way.  She is of the belief that we don’t need to be stressed out at Open House because we are all amazing teachers, and our rooms are already fabulous, and we should just open our doors, and let people come in because they will be impressed with the normal stuff that we do.

Our school is also divided about when Open House should occur.  Half of the staff believes it should be right before Spring Break and the other half wants it at the end of the year (we vote every year and it’s always close).  Our principal says it could be on a Tuesday morning for all she cares (she didn’t say it like that but you get the gist) because we just need to open our doors and let the people in.

That’s not to say we don’t let people in.  We do.  We have gobs of parent volunteers and Watch Dogs and we let the people in.

But, for some reason, our school culture has built up Open House into a Dog and Pony show and we just go ALL OUT.  I don’t know how to explain it other than to say one of the classes has a cotton candy machine going.

And I’m not kidding about that or exaggerating.

And sometimes, there’s a popcorn machine.

I’ve always had food, too.

Here’s a couple of pictures from last year to jog your memory. 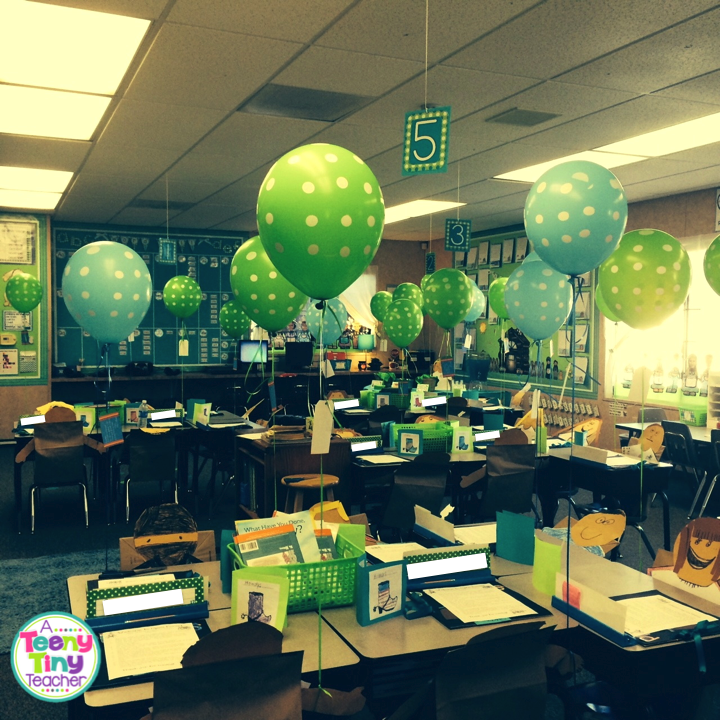 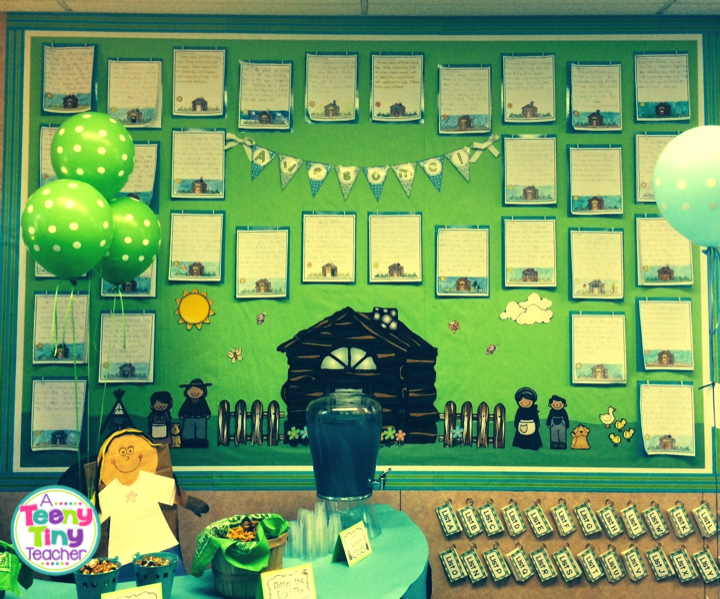 Snack Table filled with pretzels and candy and trail mix and blue Gatorade to go with our Pioneer theme.

Well, after much debate, my teammates and I decided to forego the balloons.

And the snack table.

I have to say it is a little freeing.

The balloons always stressed me out because I had to find someone to pick them up for me and then I had to tie them to each student’s paper bag person (more on that this week) and then I had to tie the balloon tag to each one, as well.  All of this had to be done before it was time to open the doors — can you say stressful –and we all helped each other with this, but we ran around like CRAZY.

And the snacks?  Well, let me tell you, I had to prep my kids A LOT before they left school to tell them I WAS NOT PROVIDING DINNER FOR THEIR FAMILY.  That they should only TAKE A LITTLE BIT.  That THEY NEEDED TO POLICE THEIR LITTLE BROTHERS AND SISTERS FROM EATING ALL THE FOOD.

And my former students?  They would come visit me during Open House under the guise of I miss first grade so much, you were the best teacher I ever had, BUT THEY WOULD RAID MY SNACK TABLE LIKE THEY HADN’T EATEN IN A YEAR.  And I would try to say, hey, that’s for the first graders, would you stop, please, but I couldn’t get a word in edgewise because my current parents were chit chatting with me, and other parents that I didn’t even know (we call these parents “shoppers” because they’re checking out all the teachers for their child who is coming up from kindergarten) were asking me how I planned on challenging their child.  That I didn’t even have yet.

But we still wanted to do a little something for our kids because they have worked really hard.

We scoured Pinterest and found a ton of ideas.  Obviously.  Lots of the ideas went with food and I was trying to stay away from food (see above) so like I said, I spent a lot of time in Target yesterday.  Did you forget we were talking about Target and that’s why I didn’t blog yesterday?  You might say I got off topic, but I say I just went off on a tangent and I found my way back.

I spent most of my time in the Dollar Spot at Target.

And I found notebooks.

And then I found a pack of 30 mechanical pencils for $6 (not in the Dollar Spot, but by this time I had moved onto the stationery aisles).

And then I found FREE rainbow gift tags from Creative Clips. 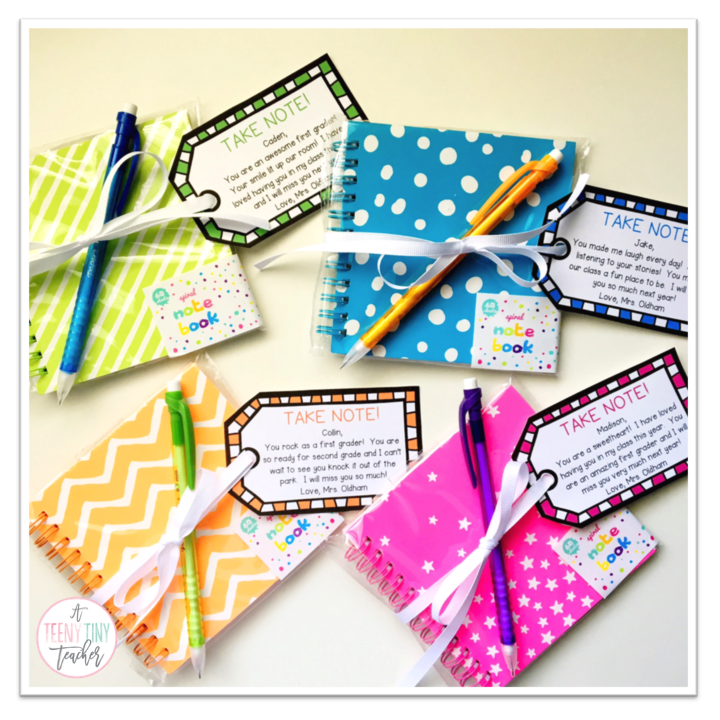 So I spent a lot of the afternoon prepping 29 of these.

And then Steve ran errands and called me to see if I wanted to meet him at Chili’s for lunch.

Who says no to that?

Chips and Queso, anyone?

I mean, I worked out.

I honestly don’t know what else I did yesterday except to say that the next thing I knew it was 7:00pm and blogging about my week seemed sort of pointless at that point.

The reason I didn’t blog yesterday AND a student gift idea for you!  🙂

PS  Yes, I realize I spent $29 on notebooks and $6 on mechanical pencils for a total of $35.  I usually spent about $40 on balloons with the strings and the weights and the helium that lasts for 24 hours.  So I saved money.  And yes, I realize that’s still a lot, but I can’t help myself.

« SORE!
How to Make PEOPLE PROJECTS »