People, we only have seven more school days before I’m on a three week break.

I think that’s a post in and of itself, and I have nothing further to say.

Okay, I have lots further to say, but I thought that sounded good.

I am so excited about this, and I’ve been dying to tell you, but I haven’t been able to so I’ve been keeping it a secret!  And, by secret, I mean to say that Steve, Kerry, my mom, Lisa, and Murphie know, but that’s just because they’re not in the biz, so to speak, so I felt like I could tell them at least, and I had to tell someone or else I was going to burst.

I was going to burst from the secret and not all of the holiday food I’ve been eating, thankyouverymuch.

Kimberly Geswin, aka KG Fonts, and I have been working on a font together.
Which means I sent her a sample of my printing and she has been doing all of the working part.  It’s a beautiful relationship, if I do say so myself.

This all came about because, over two years ago, Hadar of Miss Kindergarten, got her own font.  Check out her font {HERE}.  Hadar said that I should submit my printing for Kimberly to see.  We were on an escalator in Vegas at the TpT conference and Kimberly happened to be riding right next to us.  And, since I’m such a nerd, I had a notebook filled with notes from the different sessions that I attended so I showed my printing to Kimberly and she said Let’s Do It!  Email me when you get home.

And she replied that I needed to submit my printing to her via a scanner.


And I made it into a huge big deal in my mind because it was summer, and I had a lot of pool lounging to do, and who has time to figure out a scanner when you’ve never worked one in your whole entire life and just found out it came with your printer?

So two years went by.  And then, this fall, Kimberly asked Hadar what was taking me so long.

And then Hadar forced me to do it, as all good friends force one another to do things that are good for them.  And I am proud to say I figured out the scanner all by my wee little self.  I know.

AND NOW LOOK.  TWO AND A HALF YEARS IN THE MAKING: 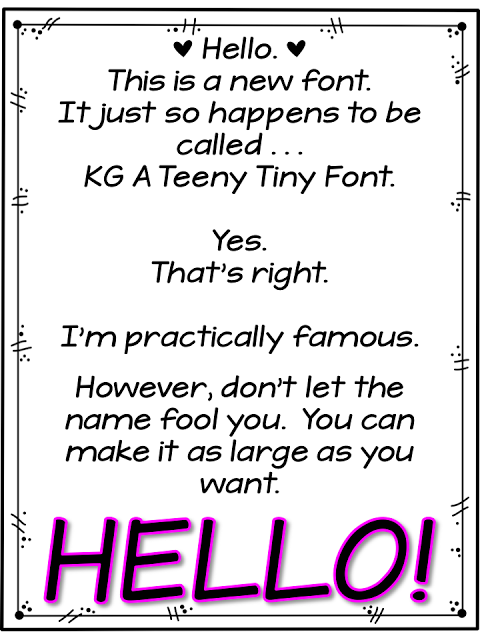 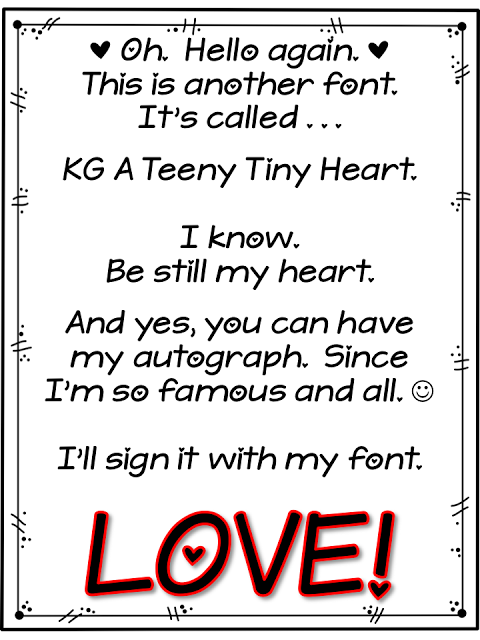 Are you dying?
Because I am dying.
It’s so fun!!
Here’s a sample of my printing: 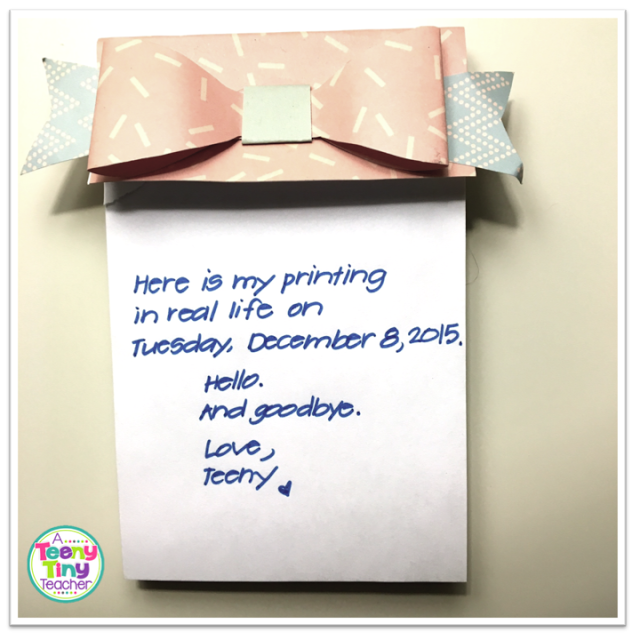 The adorable notepad is from Aris at Sailing Into Second.
She makes these.
They’re almost as adorable as she is.
🙂
Alright.
I know I’m not famous.
But I do have a KG font named after me.
Which really just means I have *another* font in my list of fonts that is already so stinking long that it takes forever for me to pick a font when I’m working on a product, or the homework newsletter, or a listening center recording sheet, or a birthday invitation, or a funny story, or . . .
It’s hard.
It’s very hard to pick a font.
You know what I mean, right?
The struggle is real.
And, basically, I just made it more difficult.
Um.
Oops.
« Five for Fraturday
Five for Fraturday »