I just completed my nineteenth first day of school yesterday.

Which I cannot believe.

But I did it.  And then I took a bow and went to bed early.

I showed you all my classroom library the other day which I said was the only major overhaul that I did to my room this year.  But today I’m here to show you something else I updated to make my life a little easier.

I got the bright idea last year that I needed more cubbies.  You would think 32 cubbies would be enough, but it’s not even close to enough when you have 32 kiddos.  The kids get the cubbies and I get nothing.  And that just doesn’t seem fair considering I’m the teacher.  And I have needs.

When I mentioned that I wanted more cubbies, my teammate, Heather, said her husband would probably be able to make some for us (or his men or his crew could because whatever it is he does has something to do with houses and wood and tools and what-not, and when I told Steve her husband would do it for us, he was thrilled because I usually make him do these types of things) and, sure enough, Heather brought us all more cubby shelves over the summer.

So thanks to Heather’s hubby (and my hubby for going to Lowe’s and getting more peg-like-shelf-thingamajigs and then putting all the new shelves in for me), I went from having 32 cubbies to having 48! 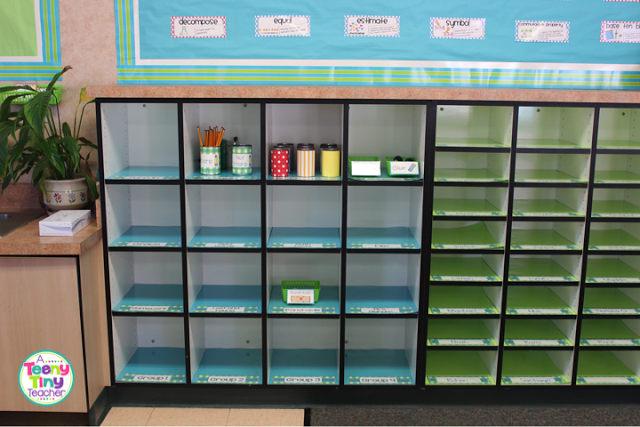 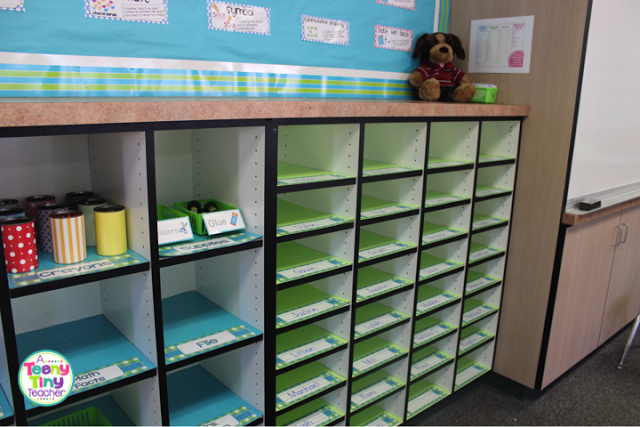 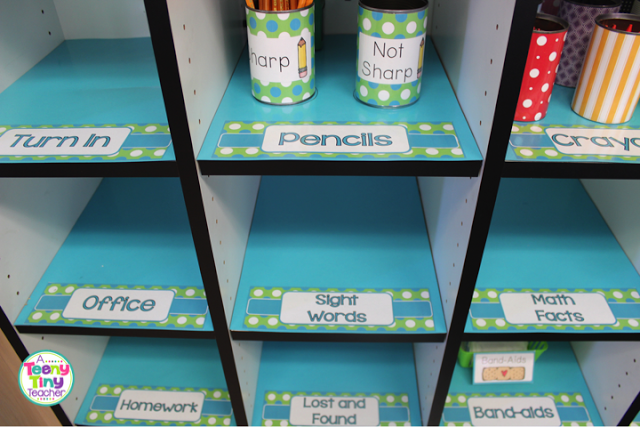 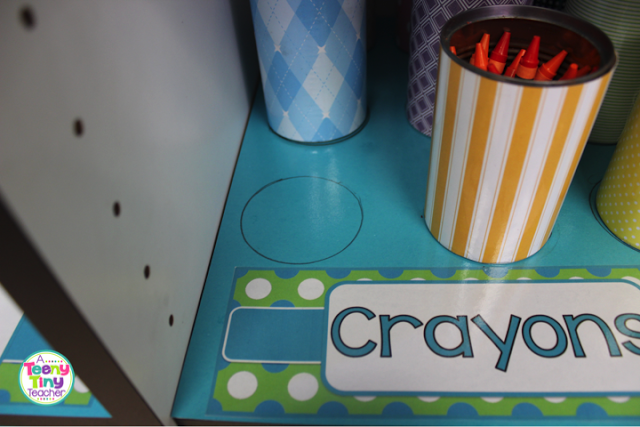 Before I laminated the liners, I made a pencil “template”
so that the kids would put everything back where it goes.
Last year, my kids made pyramids with the crayon cans.
Or they would line them up as if they were
cue balls on a pool table.
Both are definitely a type of organization.
But it’s not my type of organization. 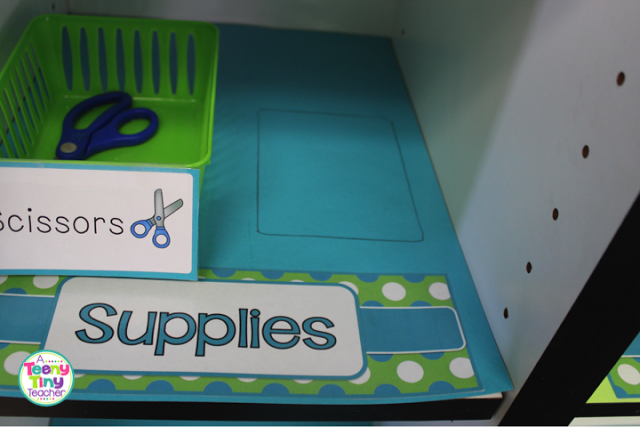 Scissors and Glue . . . I made a template for these baskets, too. 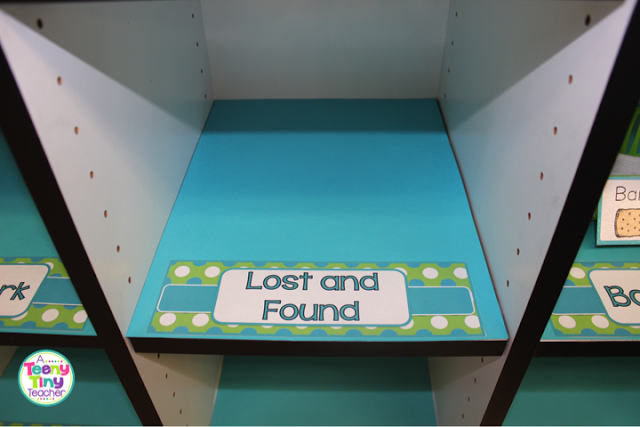 I can’t take all the little trinkets that the kids give me
that no one claims.   I cannot take it, I said.
So they can put them in this cubby and I will donate it all
to goodwill every Friday.
And by goodwill, I mean the trashcan. 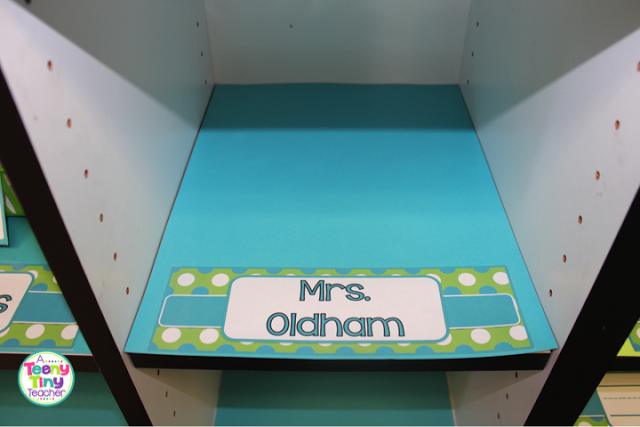 This is my cubby because I get a lot of love notes and
pictures from the kids.  I am very popular, don’t ya know. 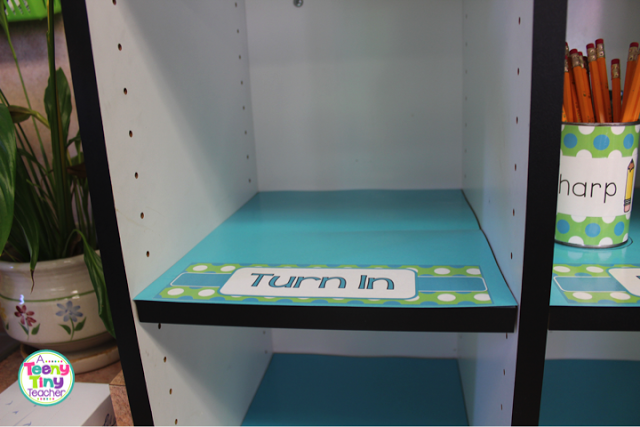 The Turn It In Bin.
But now it’s a cubby.
It’s as far away from the kids’ cubbies as I could get it.
I don’t want anyone accidentally taking home all the
work that I’m supposed to look through. 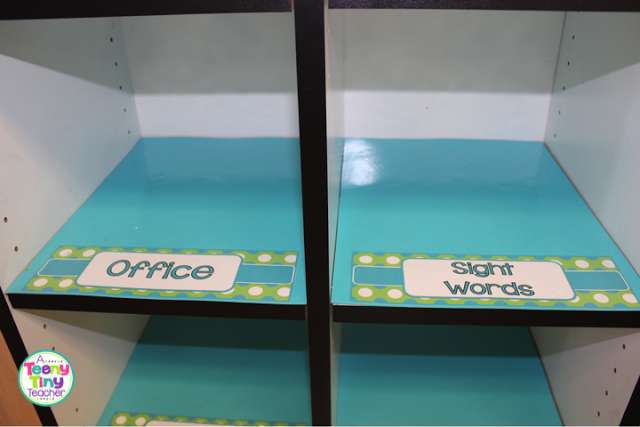 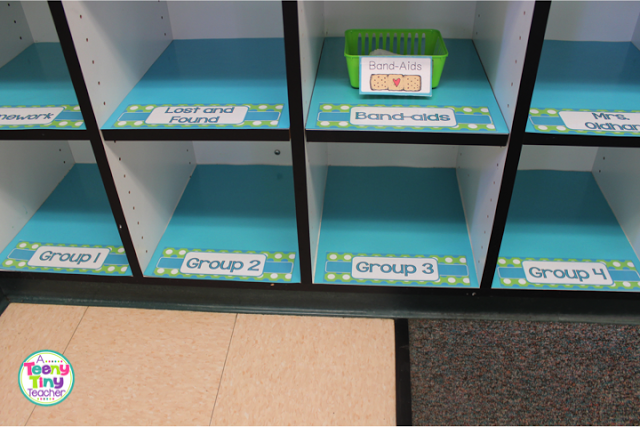 Last, I have a band-aids cubby because, let’s be real, band-aids
make everything better.  Even if a student doesn’t need a
band-aid and it’s more that they have hurt feelings, a band-aid will
make it all better.  Really.  Try it.
“She said I was bossy!” the little girl cries.  Boohoo.  Sniff Sniff.
“Oh no!  I don’t think you’re bossy!  Will you be okay?” I ask, incredulous.
“No!  I’m sad!” she cries.  Still.
“How about a band-aid?” I ask.
“Okay!” she says, as she skips away.
Works like a charm every time.
The cubbies that say Group 1, 2, 3, and 4 are for Parent Helpers.
More on that later . . .
So there you have it.
I love that all of this extra storage is in one place, rather than in different spots around my room.
I already love it!
Okay, that’s all I’ve got.  I’m off to take another bow and go to bed.
« Classroom Library
Five for Fraturday »