Happy Saturday!  I can’t believe it’s the first day of October.  Besides the fact that its 92 degrees, I just can’t believe we are already heading towards report cards and parent conferences.  YIKES!!!!!

So this week we learned about action words, or, as I like to call them, VERBS.  I mean, why revisit nouns two weeks in a row?  Let’s just move right along, right?  So off we went to discover verbs.  Again, I use the two terms interchangeably depending on who is in the room, near the room, or passing by my windows appearing as if they MIGHT come in my room.  Not to mention, the first grade team always has each other’s backs and if one were to see an administrator or a V.I.P., we knock on the wall.  That’s a heads up to get yourself in order.  Not that we’re doing anything wrong, per se, but if, for example, I am reading a chapter of Junie B. instead of my regularly scheduled program  anthology at that exact moment in which my plans state that I will be, I can adjust things accordingly.

Back to verbs — I played the song “Bop Till You Drop” from the Greg and Steve cd titled “Kids In Action”.  The kids had to do whatever the song said, such as bounce, jiggle, spin, etc.  Lots of fun had by all, mainly me, until we had to spin.  I got a little dizzy and fell on a couple of kiddos but no one was seriously injured.  Then we played a game of Simon Says in which kids had to carry out the verb I said. I threw in sight words and nouns to see if they could distinguish between all of these words.  We brainstormed words and then acted out the following cards: 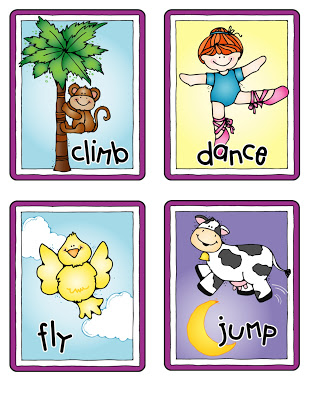 These cards are also from the DJ Inkers Language Arts cd and then I created some more.  Click the pic to go to my TpT store to pick up 30 noun cards, 30 verb cards, and 30 adjective cards all bundled in one set.
I imagine we will be learning about adjectives next week but not quite sure.  Yes, I am already planned but I forgot what we were doing for Grammar because my mind is more focused on our District Assessments and our window opens Monday.  We have a group section and a one on one section.  Our kids will have to state TWO RHYMING WORDS again . . . apparently, the novel that I wrote on the comments section of last year’s District Assessment was ignored.  HUMPH!  Whatevs.  I am in complete agreement that our kiddos should be able to rhyme and pull rhymes from out of thin air but . . . I would like it if we could push it back to second trimester and/or make the curriculum match the assessment.  I will not even go into the fandangled, bedazzled student responders that we are supposed to use to record the results.  I think my blood pressure is just a bit high from discussing the rhyming stuff and I should stop while I am ahead.
« Shoes and Such
Action, Take Two »