I worked a whole day today.

It was good.  We were all a little sleepy.

And no one mentioned the H word.  (Halloween)

We did have a little bit of excitement when we had an out-of-the-blue lock down.

I guess it’s always out-of-the-blue because you never know when some lunatic is going to go crazy.  Luckily, we all know when one of our teachers might go off the deep end . . . say, around parent conference time, or report card time, or progress report time, or Halloween on a Wednesday, just to name a few . . . but I’m talking about the general public lunatics.  You can never be too careful, you know.

My class was in the Computer Lab and my kids all had their head phones on, and I was diligently doing something worthwhile and not checking my email or TpT stats, that’s for sure, when the announcement was made.

There wasn’t a code or anything.

We have talked about a code before.  Something along the lines of “It’s time to take out the trash because it stinks now.”  Or “A red canary sings to the bluebird over on the bush.”  We’ve thought of so many that I think the actual emergency just warranted a “Batten Down the Hatches” panicked announcement.

My kids had no clue.  None.  Turns out headphones have multiple purposes.

I went to the door to make sure it was locked.

So I asked the computer lab aide if she could lock it.

She didn’t have a key.  As a matter of fact, she doesn’t even possess a key because she is a part time aide, and so the door is always open for her.

Well, I felt a little vulnerable, what with it being an ACTUAL LOCK DOWN, and our door was unlocked.

But I warmed up with my Tae-bo moves and practiced a few on the aide.  It didn’t matter that it’s been a few (a million) years since I faithfully did my Tae-bo tapes.  I’ve still got it.

Five minutes later, the trash had been taken out, the birds were no longer singing, and we were good to go.

I still don’t know what the issue was, but I’m thankful for it because instead of a 30 minute time period to read blogs  for my kids to learn and practice valuable computer skills, we had more of a 45 minute time period. 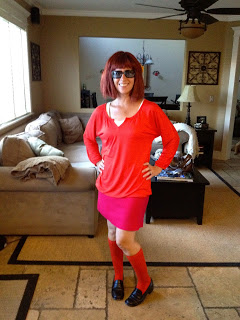 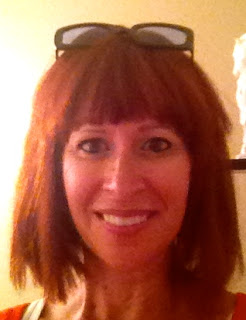 The glasses drove me crazy.
So I took to wearing them on the top of my head.
Hubs says he likes me better as a blond.  I think I like me better as a NORMAL person that wears her NORMAL clothes and looks
like a NORMAL person.  You know, like the one couple at the party who did not dress up because they say they didn’t get the memo that it was a Costume Party.  Uh huh.  Sure.  But that’s how I like to look.
I actually tried to forget my wig at home a few times and the hubs kept finding it.  I had a hard time explaining why it kept showing up in the hamper and the garage.
And, just so you know, I did flat iron the wig.  I don’t think it did anything to help the whole disaster that the wig was, but it didn’t melt.  A lot of you were afraid of that, but I’m here to tell you that this fake hair is practically real.  Eighteen dollars well spent, I’ll say.
Before I go bury my head in shame, I just wanted to answer a question that I got about my iPod.
I do not hook my iPod up to speakers, but I know another teacher who does, and that works fine.  I have a docking station.  It wasn’t that expensive and I think I got it from Target.  Also, it isn’t really an iPod.  It’s my hubby’s old iPhone.  I just use it as an iPod.  🙂
So there.
I’ll see ya later!
I’m running out of here as fast as I can because I feel embarrassed!
« Scooby Doo (and a Sale)
Treats for Our Sweets »