Hooray for the weekend!! 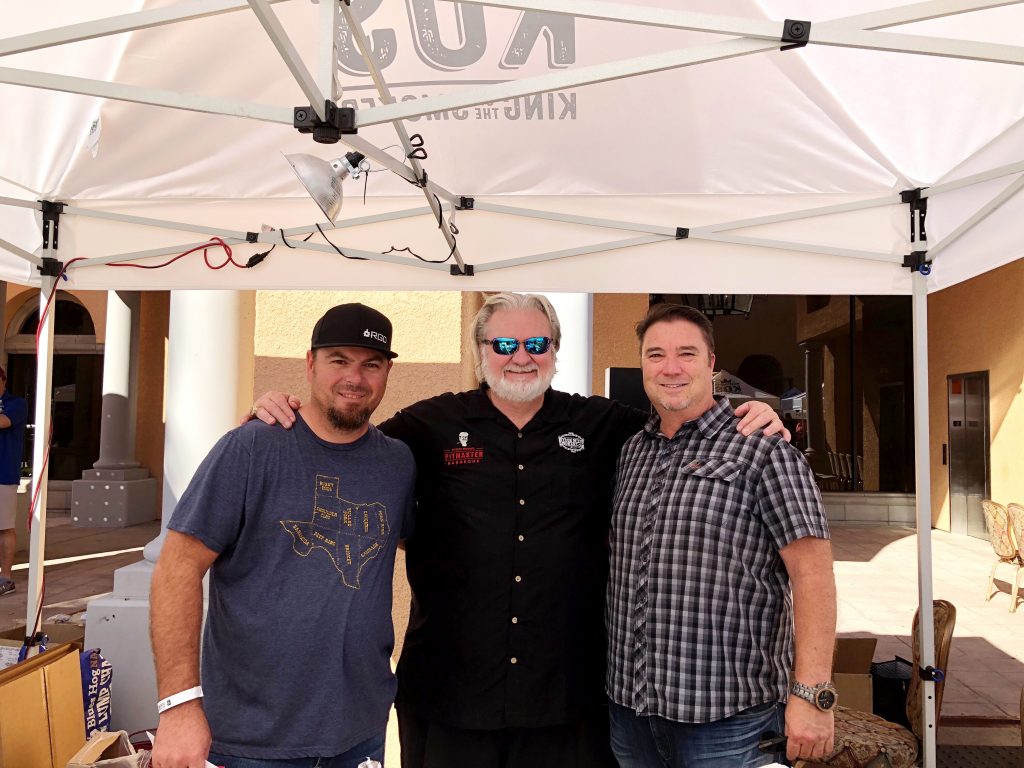 Last weekend was our little mini vacay in Palm Springs so that we could attend the Smithfield King of the Smokers BBQ Competition.  Steve was so excited about it which I could only relate to if I thought of it in terms of the Blogging World or TpT and how excited I get about seeing people I admire and want to learn from.  Otherwise, I was just kind of thinking calm down, it’s just people, and meat, and now my hair smells smoky.

The picture above shows Steve on the left, his buddy, Toby, on the right (who drove in just for the day), and the famous (at least in the BBQ world) Myron Mixon in the middle.  Steve flew to Georgia and took a class from Myron in the fall and he is a HUGE fan.

We walked around all day and sampled meat, and ate lunch, and asked questions (well, Steve did and I talked to any females I ran into about their funny t-shirts or who-knows-what), watched cooking demonstrations (Myron is HILARIOUS when he cooks) and then stuck around to hear the winners.

It was a really fun day.  Toby went home right after and then Steve and I went back to the little outdoor lounge bar that we went to the night before.  We couldn’t even eat dinner because we were so full from the samples and lunch.

Did you read what I just wrote?

There was a guy singing and playing guitar on the patio AND HE WAS AMAZING.

SERIOUSLY AMAZING!!  He is there every Saturday from 7:00 to 10:00 and if you’re ever in Rancho Mirage, I highly recommend going to the Westin to hear him sing!  His name is Michael Keeth.  He sang a bunch of cover songs and then in between, he would sing his own songs.

Listen to his cover of Elton John’s Tiny Dancer.  We (and the other people sitting at the fire pit with us) were so impressed!  It’s an absolutely beautiful version.

By the way, he’s pretty darn handsome if you’re into balding guys with beards, and smoky eyes, and he plays the guitar sort of fellow.  😉 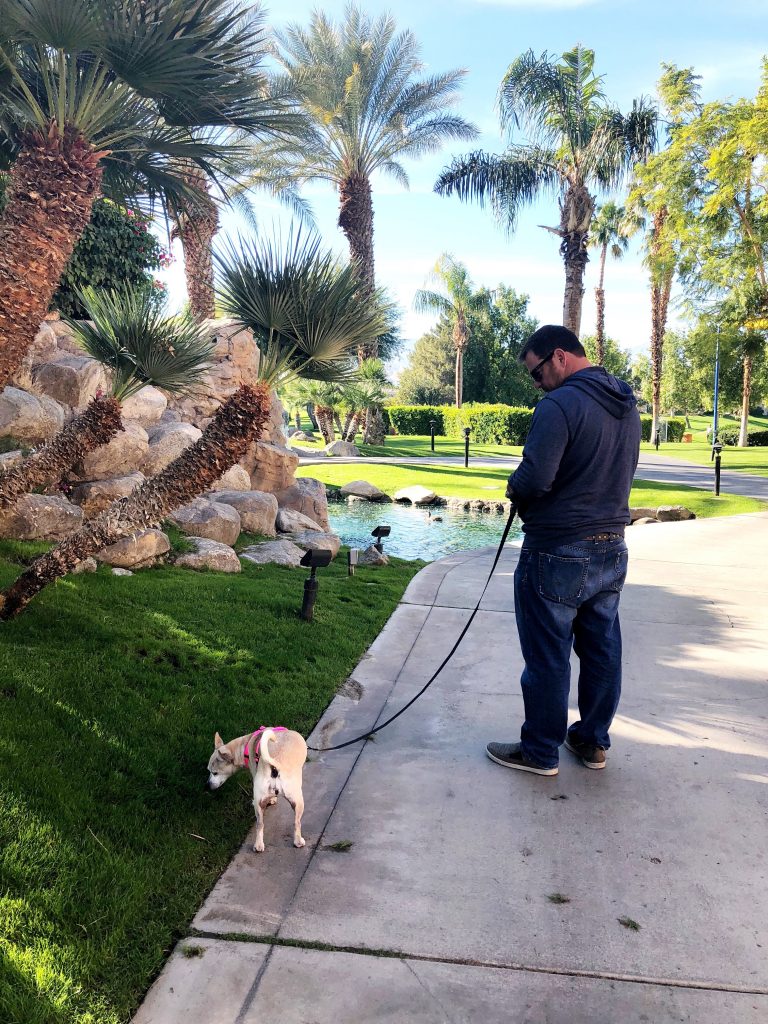 The Westin in Rancho Mirage had the cutest little fenced-in area in the lobby (which Steve walked right past in his attempt to check us in) but I promptly stopped to see what was inside.  And, sure enough, there was this little dog sleeping on a plushy pillow!  I stepped back to read the little sign and, basically, she is up for adoption and is the “Westin dog” at the moment.  The sign says to ask before going into the area to pet her because there’s no telling how many people have played with her and she could be overstimulated, so once they said I could go in, YOU BETTER BELIEVE I WAS SITTING ON THE FLOOR INSIDE HER “YARD” AND SHE WAS CURLED UP IN MY LAP LIKE MY BABY.

That’s pretty much how Steve found me after he checked us in.

Then he got in on the action BECAUSE WE ARE CRAZY DOG PEOPLE, GIVE US ALL THE WET KISSES YOU CAN THANK YOU VERY MUCH.

Her name is Lady and she is a 9 year old Chihuahua mix and the sweetest thing ever.

On Saturday morning, we got coffee and then we went to visit Lady (our Murphie girl was spending the weekend with Steve’s aunt).  The next thing I knew, we had checked her out and we were taking her for a walk.  We checked her out like you would check out a library book.  🙂

We are nuts, I know, but she had been checked out once that morning already, so we’re not the only ones!

🙂  Now that we know this hotel is dog friendly, Murphie will be coming with us!

And no, we did not adopt her.  Right now, Murphie is all we can handle!  🙂 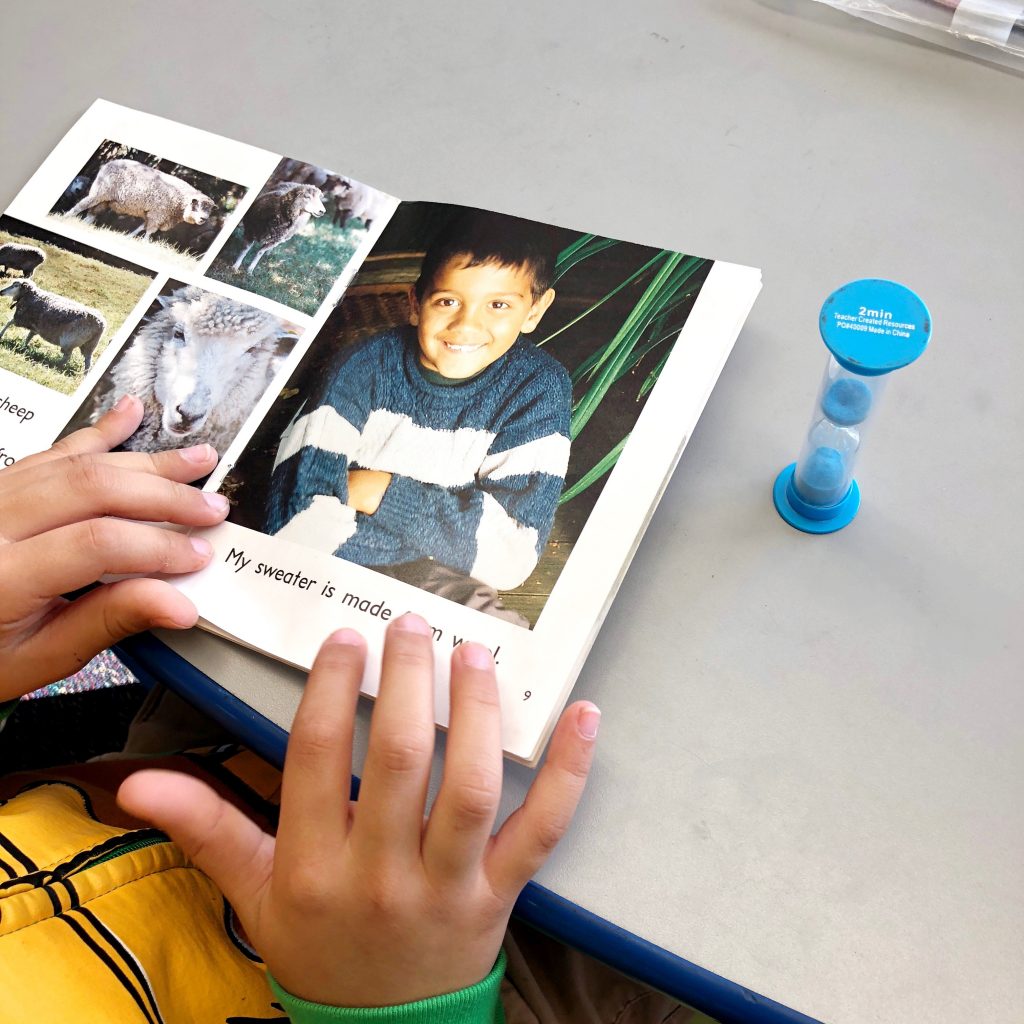 Snippets by Sarah posted this idea on Instagram and WOW!  It is a genius idea!  Sand timers for the win!!!  I don’t know how you do it but, in my room, we have one guided reading book in each group for the whole week.  Each day, we’re reading it, focusing on something new, etc etc etc.  By the end of the week, we are really working on our fluency and making fewer and fewer errors.  Some of my kids can get a little too big for their britches and some of them complain, and ask things like why do we have to read it again, I already know all the words, and even though I’ve said because it is important, we become better readers, we are working on fluency, because I said so a million times, it sometimes still happens.

On the flip side, some of my kids will read the book over and over and over again without complaint, and cradle it like a baby, and hold it gingerly and daintily in their hands, and these kinds of kids are my soulmates, but that’s neither here nor there.

Once I saw the post about the sand timers, I was ALL OVER IT.  I was also sort of kicking myself because HELLO, WHY HADN’T I ALREADY THOUGHT OF THIS?  But I’m sure I did think of it and forgot it.  Or if I didn’t think about it, it’s because my brain is full of other things like puppy breath and sampling free BBQ food.

So here’s the sand timer deal.

Tell them to read until the sand runs out.

My kids were OBSESSED on Thursday.

Let’s do it again, they said.  Again, again!

And I obliged them because I was leaning in and listening and beaming and feeling like I WAS ON FIRE.

Thank you, Sarah, for this great idea!! 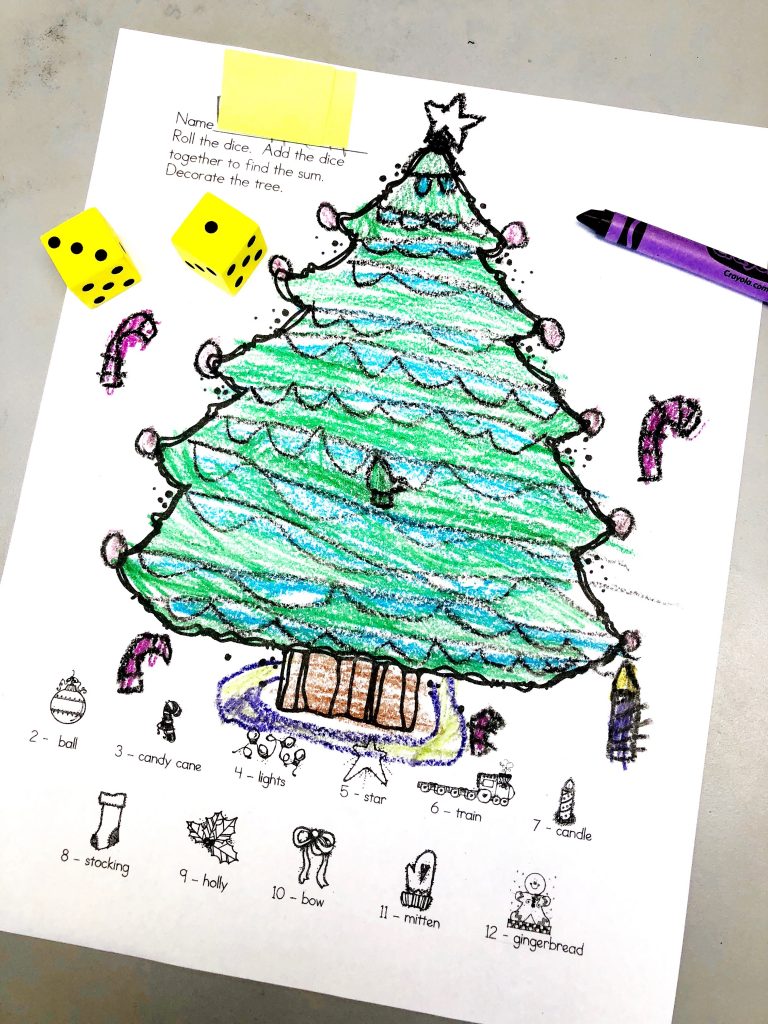 It was time for a little Winter Tree Roll the Dice activity this week!  🙂  My kids loved the Turkey one so I thought to myself, WHY NOT?

We finished up a math unit this week, and rather than start a new unit on a Friday (I mean, I might be crazy, but I am not a lunatic, for crying out loud), we did this instead!

And they CHEERED when I brought it out and one little girl said But I haven’t finished my Turkey Roll the Dice one yet, and she was all sad-like, and I said well, now’s your chance, have at it!

Now I know why her desk is a disaster.  She SAVES EVERYTHING, apparently.  Even when I say things like take it home, finished or not.

My kids spread out around the room, I played some music, we rolled FOAM DICE, and a good time was had by all.  🙂  By the way, I think I’ve said this before, but FOAM DICE is a must.

Don’t do this activity unless you have FOAM DICE.

Otherwise, you’ll hate me and I don’t want that.

We got foam dice with our math manipulative kits, plus I got some from Oriental Trading Company.

I’m thinking you get out for break this coming Friday, December 15th, and you might need it this week.  I, on the other hand, do not get out until Friday, December 22nd.  Yes, you read that right.  DECEMBER 22nd.  Santa might as well drop all the gifts off in my classroom for how late we’re staying in session.

I probably should have saved this for one day in the NEXT COUPLE OF WEEKS now that I think about it. 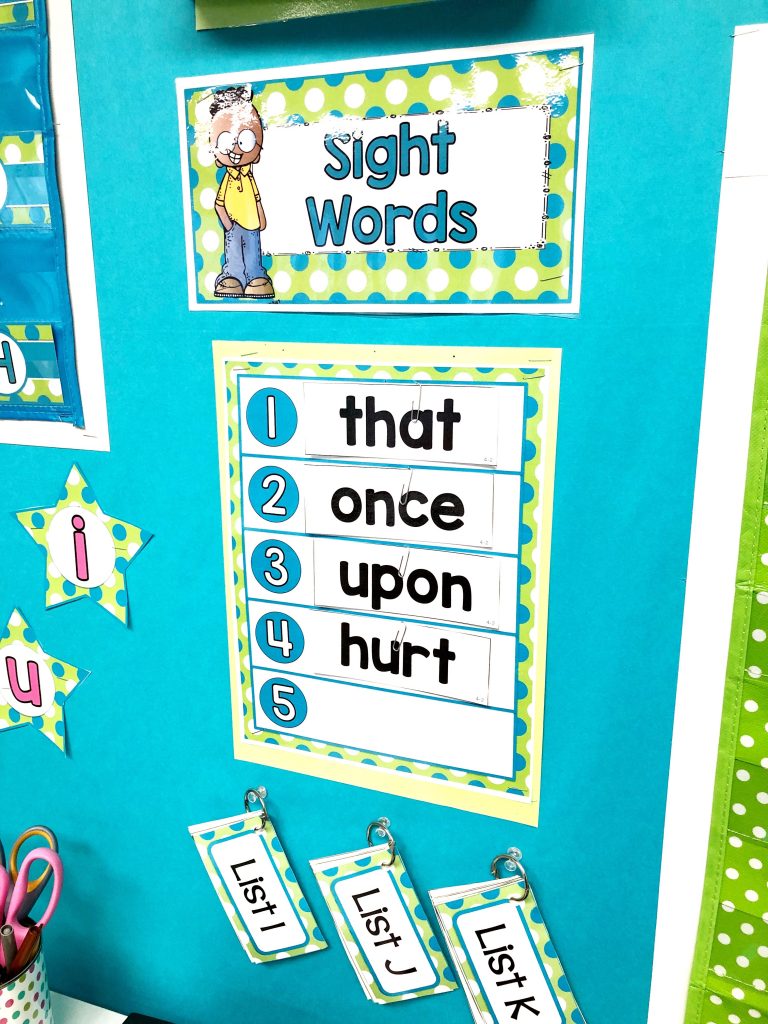 I blogged IN THE MIDDLE OF THE WEEK.

Did you see it?

It was all about how my classroom phone NEVER STOPS RINGING EVER and I am constantly being interrupted during my teaching AND HOW I CANNOT TAKE IT ANYMORE.

I want to let it go to voice mail but, when I do that, they either call back OR SHOW UP IN MY ROOM.

THIS IS A TRUE STORY!

Anywho, I blogged about some of the ideas I use when the classroom phone rings and I’m in the middle of a whole group lesson on the carpet.

If you didn’t read it, you can READ IT HERE.

We are finally going to decorate for Christmas this weekend!

Have a great weekend!!

« When the Phone Rings
Five for Fraturday »