Happy Happy Happy weekend!  I just finished my first full week of teaching so this weekend is going to be EPIC!

And by epic, you know I really mean becoming an unproductive member of society who stays in her pajamas and drinks coffee and catches up on sleep and reality TV and then scrambles around on Sunday night planning and prepping for the week ahead. 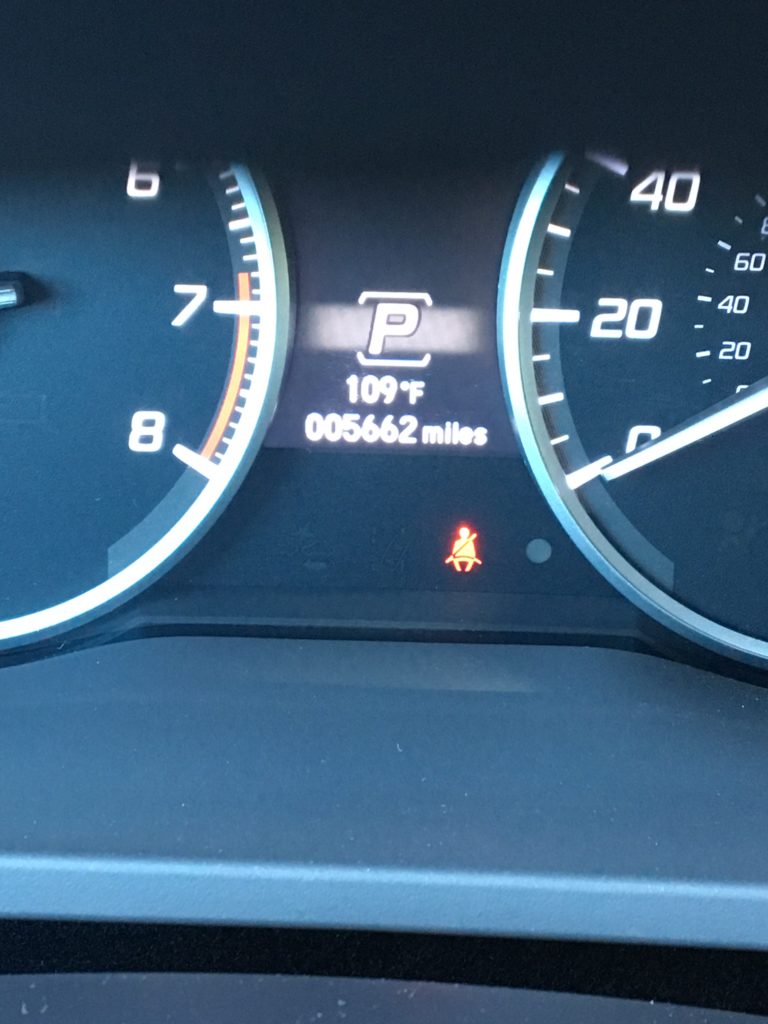 For all you safety people:  my seatbelt wasn’t on because I was in park.  I was home.  I was getting out of the car and going inside to undress and stand in front of the refrigerator.

That was the temperature on Monday.

Where there is no air conditioning.

One hundred and nine degrees.

We somehow managed to get our first recess that day, but we were stuck inside for the rest of the day, for obvious reasons.  Remember how I teach at an “outside” school?  We have to go outside to go anywhere . . . well, it felt like my eyeballs were burning into crisps just walking my kids to the lunch tables.

And I was wearing sunglasses.

So the fact that my kids made it from our classroom to the lunch tables without sunglasses, and still had eyeballs when they returned is simply amazing. 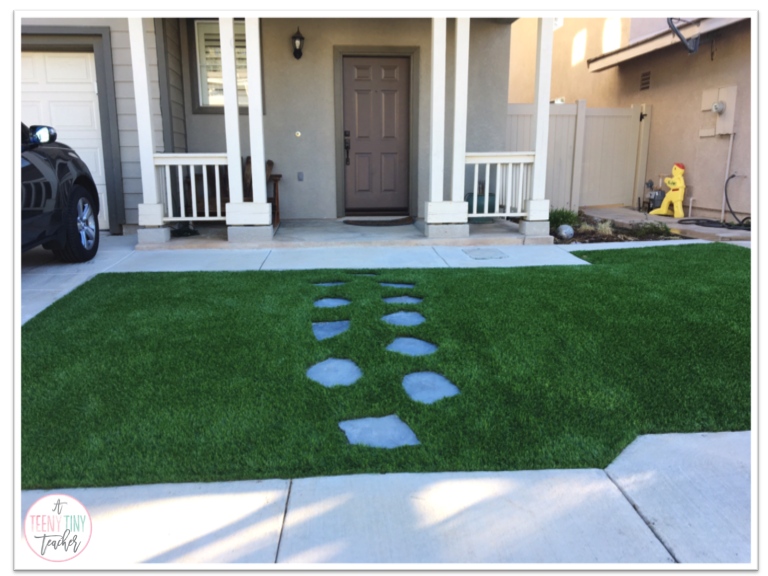 When I got home that day, our front yard had been transformed by some of the hardest working men EVER.  Because while I was complaining about walking the short distance from my classroom to the lunch tables, these men were putting in our artificial grass in the front yard ALL THE LIVELONG DAY.

When I asked them if they had water, they said yes, of course, but wanted to know if I had any ice.

Their water wouldn’t stay cold because it was like we were living on the sun!  The sun, I tell you!

Of course I had ice!  I grew up with my mom and, in case you didn’t know, beverages need ice!  Well, unless it’s a hot beverage.

So I gave them all the ice I had and then admired our new fake grass.

Due to all the drought stuff, and watering rules, and brown dead grass, and weeds, we needed to do something.

Because now we have it in the front and the back.

Our next big project is the porch.  We’re going to spruce it up.  We’re taking ideas if you have any. 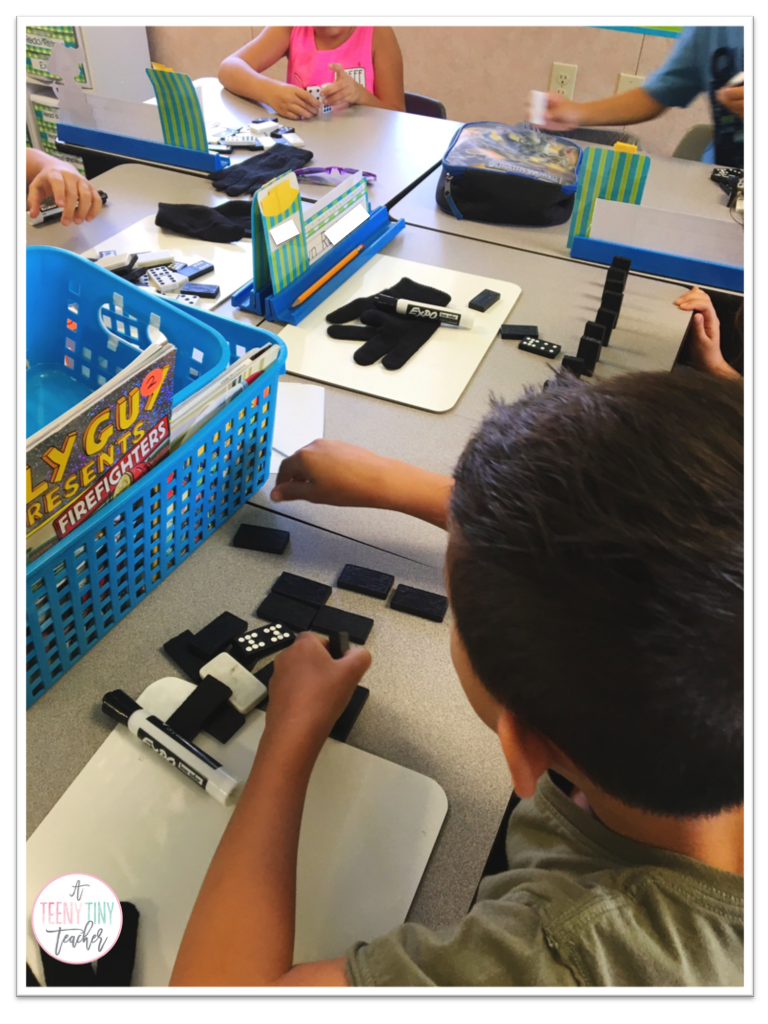 We had math tubs all week.

Because, people, I’m doing it.

I have to.  I can’t stop thinking about it so I have to do it.  Teaching whole group math has been the least favorite part of my day for my entire teaching career.

So surely I need to do something different.

My principal gave me her blessing and I’m being the guinea pig for our team.

Math Tubs are going amazing so far and it helps that I have a naturally quiet class who follows directions, too.  So this is my year to try it because these kids are going to make it happen for me.

I’ll keep you posted on how it’s going!

So far, my kids think math is the best thing ever.  🙂  Who doesn’t love a tub of dominoes, blocks, cubes, pattern blocks, and buttons?  When the only rule is stay at your table and pretend the teacher isn’t here?

Their stamina is crazy, by the way.

So no one leaves the table group.

And no one talks to me.

I have to stop them because fifteen minutes will have passed, and they’re still going strong, and we’ve got other things to do. 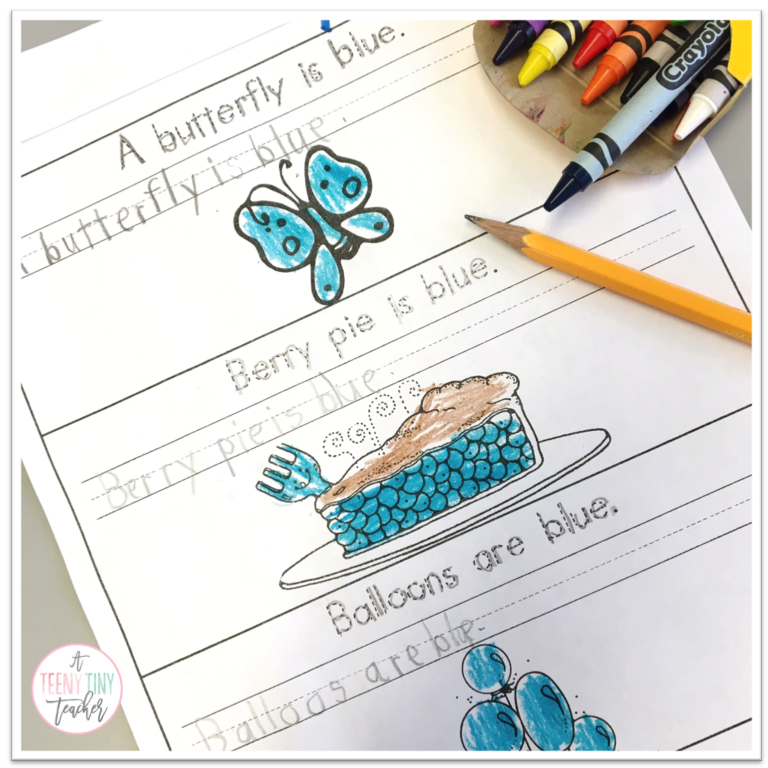 I’m using these printables as morning work and they are perfect for a quick assessment of my new kiddos.  I can tell right away who struggles with tracing, copying a sentence, spacing . . . I can look at printing, capitals at the beginning of the sentence, punctuation at the end . . . who colors neatly, who rushes . . . I walk around and ask kids to read the sentences to me . . . who knew three little sentences with some clip art could be so powerful?  😉

I use these every year at the beginning of the year for all of the above reasons.

Grab them for FREE!! 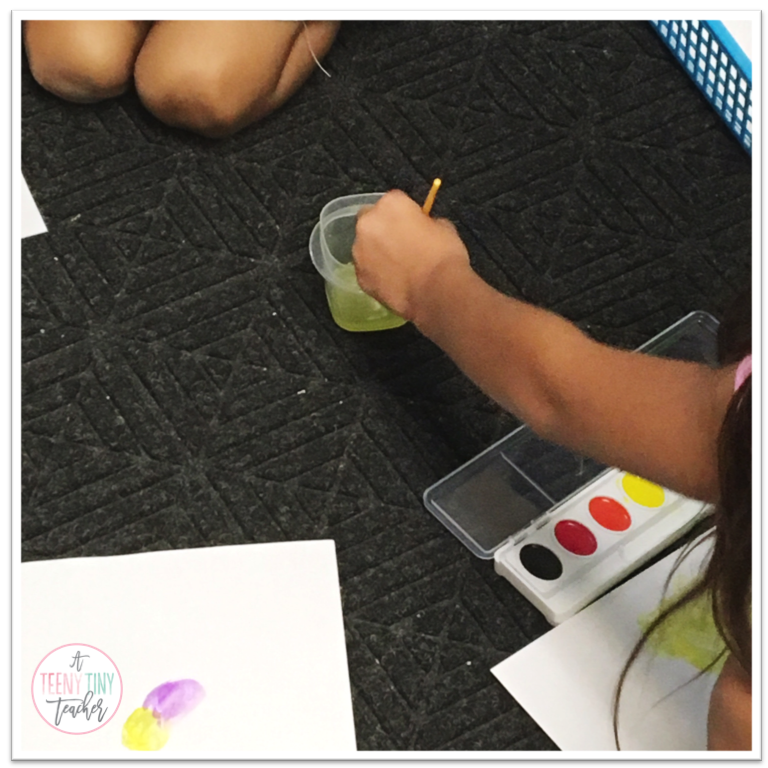 I’ve been an idiot for YEARS.

For Fun Friday, I’ve always had an art center.  It started out as a real art center, with craft stuff like popsicle sticks and pom poms,  beads and stickers, foam stuff and feathers, etc.

And it was ALWAYS a mess and it always turned into she got more beads than me, that’s not fair, I wanted all the red ones, I was making a heart for you! and it was never cleaned up properly.  Ever.

After awhile, less and less stuff was in the art center, and by the time all was said and done, I decided to make my art center a tub of watercolors and paper.

Except it wasn’t the end.

Because I got four plastic cups from the Target Dollar section for the rinsing of the paint brushes.

Which led to spillages every single week.

EVERY SINGLE GOSH DARN WEEK, WITHOUT FAIL, YOU COULD PUT MONEY ON IT THAT WE WOULD HAVE A SPILLAGE.

Now we have new carpet.  And they put the new carpet everywhere.  EVERYWHERE.  So where we used to have a strip of tile, we now don’t.

And we always painted on the tile because of the spillages.

The carpet people put in this waterproof mat thingamajig (supposedly) under the sink and in front of the door, though.

But I was scared to have an art center this year.  I mean . . . THE SPILLAGES!!!  (Re-read that with horror music in the background)

And I *finally* came up with a solution.

I got the teensiest tupperware container I could find and I showed the kids how far they were allowed to fill it up.

And, for the first time ever in all the land, WE DID NOT HAVE A SPILLAGE.  (Re-read that with soaring, triumphant music in the background)

WHAT WAS I THINKING ALL THESE YEARS?!

My teammate, Heather, said she uses a super heavy glass jar that never tips over and she’s never had a spillage.  So I guess I could have asked her.

Yeah.  That would have been good.