I’m late to the party.

I tend to be late to most parties.  Not actual parties because actual parties have food so you know I’m showing up on time, plus I live with Steve, and he is punctual to a T.  It’s really annoying most of the time, but I love the guy so what are you gonna do.  I’ll tell you.  You’re gonna show up early and sit in the car and tell him you can’t go in yet, you don’t want to be first.

What I mean to say is that I’m late to the type of parties that include revolutionizing my centers, making a Bitmoji, and now, making a Teacher Toolbox.

I think the next thing I’m going to be late to is the LightBox phenomenon that I’m seeing everywhere and drooling over.  But that’s for another day.  Or, most likely, next summer.

Any who, I couldn’t take it anymore and I succumbed to peer pressure and I finally have a Teacher Toolbox!  HIGH FIVE, OTHER TEACHER TOOLBOX PEOPLE!

Oh, and I should have started this off by saying that my teammate, Laurie, had her very own Teacher Toolbox last year.  Her daughter made it for her.  And her daughter offered to make one for me, as well, and I was all ohhhhh, no thanks, I don’t think so, but I appreciate it!

Because I was dumb.

And I didn’t get it.

Because I was dumb.

I found Ashley’s DIY (which means Do It Yourself, not Drink It Yourself, FYI) tutorial which is perfect and practically makes the toolbox for you.

But, honestly, Ashley’s tutorial is great.  I pretty much got it right away.  Not at all like the time I wanted to do the Christmas String of Tree Lights Paper Garland Craft Thingy That I Found that might as well have been written in Latin for all I care. 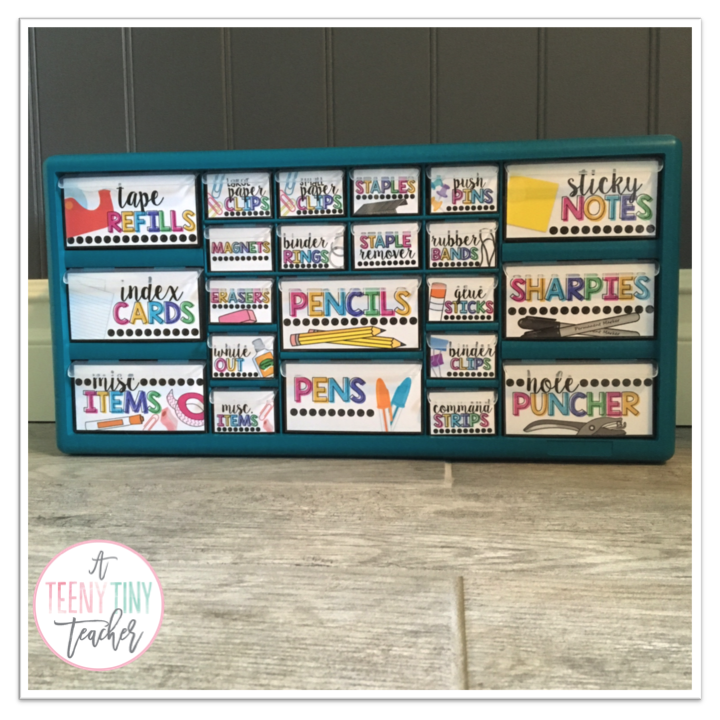 LOOK WHAT I DID!

You can find all of this in Ashley’s tutorial, but I will leave pertinent information here, too, as a just in case.

I followed Ashley’s link to the toolbox on Amazon {HERE}.  Apparently, you can get a like toolbox at Home Depot or Lowe’s, too, but all I have to say to that is they don’t have Prime and they don’t deliver in the next two days so no thank you, not gonna bother.

Once it arrived, I told Steve I needed to spray paint it.

AND . . . luck was on my side because we just happened to have turquoise spray paint in our garage from a different DIY project that I did that I don’t remember but who cares?  I had spray paint all ready to go!

This was the only part of Ashley’s tutorial that wasn’t crystal clear because Steve said (as only Punctual Steve can) we’re going to need to sand and prime this first.

Read that again in a deep, authoritative, King of the Garage voice.

We’re going to need to sand and prime this first.

To which I sputtered Nuh uh!!!!

Because I was ready to do it already.  Duh!

I private messaged Ashley for her advice, and she said she just spray painted it right away.

I reported that to Steve as if it was the Bible.

Not to mention, we used Rustoleum spray paint which goes directly on PLASTIC.

And BAM!  We spray painted that toolbox in the backyard and it was done in about five minutes.  I let it dry overnight (although I didn’t want to, but Steve made me).

They fit perfectly, by the way.

I printed them out on card stock, laminated them on my home laminator (this is literally following Ashley’s tutorial verbatim), and cut them out.  By the way, the labels are editable if you need something that she doesn’t offer.  But I’m here to tell you, she thought of everything.

And like I said, I followed the tutorial to a T.

The only thing that Ashley left out of her tutorial is how to figure out where to put all of your drawers once you’ve labeled all of them.

I mean, do I want staples on the top row?  The middle row?  Next to the paper clips?  By the sharpies?

It was pretty much the most difficult part of the project.  It hurt my brain.

And now I can officially say that I have done a little school prep.

And pat myself on the back.

And eat some ice cream.

I mean, I did an actual project.