Happy Three Day Weekend!  I have two and a half more days.  Again, I’m not counting.  Just being informative.
I have to start off this post with a big, huge, enormous shout.
HALLELUJAH!
MR. CLEAN MAGIC ERASER CLEANED MY TABLE!  IT’S BETTER THAN NEW!
I’m so happy.  (“THO HAPPY!” she said, as tears welled up in her eyes.)  One of my teammates had a magic eraser in her room . . . so she sent a kid over with it, and it was working like magic before it even entered my classroom.  I also got rid of some sharpie marks and a couple of unrecognizable somethings or others.  Thank you to everyone for all of your help!!!!  I feel much better about all things.  In general.  I am a happy person to be around at the moment so stick around.
My play is over!  Thank goodness!  Praise the Lord!  I am so relieved.  Although, it’s always so much fun to rehearse in the library (where we have a stage – the only good thing best part of the library!) with my partner every day.  We do the same play, but we have to do it separately because we can barely fit 32 kids on the stage, much less 64.  So my class will watch hers and vice versa.  And we help each other.  And we always crack up.  It’s a blast.  I would like to teach with her everyday.  We often talk about not having a wall between us.  Although, I think it was put there to ensure that we actually DO teach.
Our play is Three Nanny Goats Gruff.  Much like the Billy Goats Gruff, but this one has GIRL POWER.  Gotta love it.
It’s a musical.  My friend bought it at the teacher supply store.  Don’t be scared, but this is what it looks like. 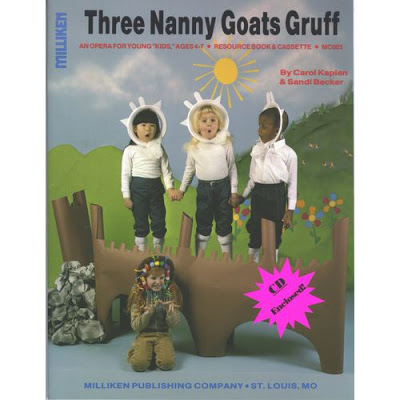 I have changed the script over the years to fit my needs (and to create some comedy) . . . and to fit in all of these millions of characters.  The lady singing on the cd sounds like an opera singer.  She’s all “Nanneeeeeeeeeeeeeeeeeeeeeeeeeeee. . . and Goooooooooooooooooats . . ” and I envision her mouth open super wide and she’s in a robe of some sort.  With a lot of makeup and some ringlets.  Can you tell I have never been to the opera?
I tell my kids we will not be singing opera style.  We need the glass in our classroom windows to keep the bugs out.  It also helps keep the kids from escaping.  So we sing in our regular voices and then we move up to the music-only songs.  We’re brave like that.
Many years ago, my partner and I spent a ton of money on large
t-shirts and baseball hats at a swap meet.  A scary swap meet.  An inside swap meet.  But we got a deal so that’s all that matters.  I just know now that I will never go to that swap meet by myself.  Or without a taller person next to me.
Then we asked for volunteers to take the t-shirts and hats home and create something.  It was fabulous.  SEVERAL parents helped.  And then two parents made our backdrop.
And this is what it looks like . . . 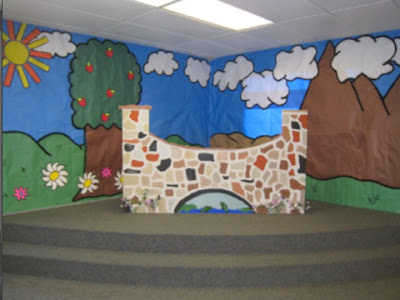 the stage in the library
(I forgot to say that I inherited that bridge from one of my very first partners.  She moved to a land far away called Missouri and the bridge wouldn’t fit in the Uhaul.  So I inherited it.  Our custodian stores it for us because he doesn’t know how to say no.  It’s his best quality.  The bridge is special and I miss my friend.) 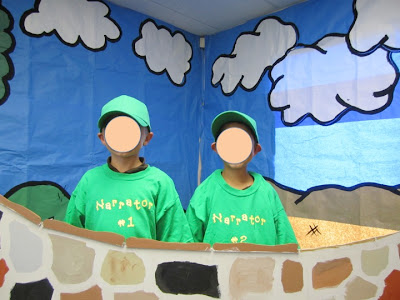 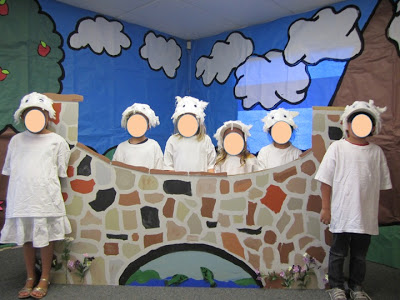 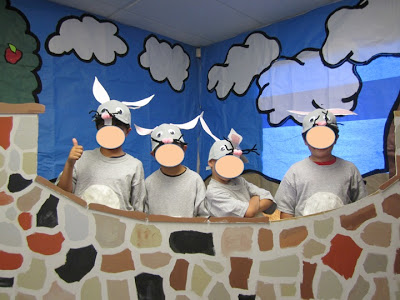 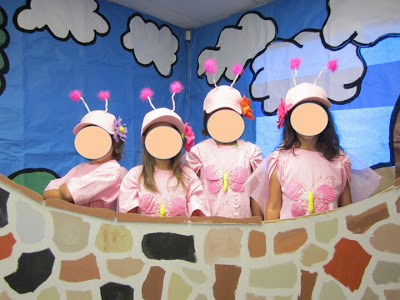 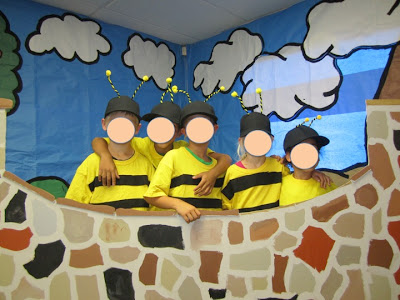 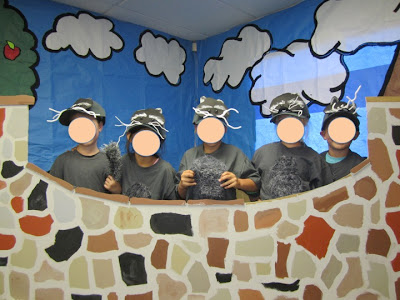 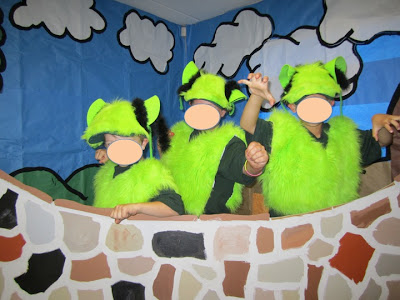 We lysol the costumes each year.  And rinse a little.  But we can’t actually put them in the washing machine due to all of the fur, cotton, string, tails, etc.  They just put the costumes on over their regular clothes – hence, the larger size.  So far, no outbreaks of lice, either.  I’m sure it will happen now that I’ve typed that.  But it’s okay.  As the director, I do not wear a hat.  And it’s Memorial Day weekend so my kids have three days to take care of any shampooing needs that may come up.

My partner and I have to beg the librarian for the use of the stage every year.

I guess beg is the wrong word.

I think a better word would be bribe.

We get her gift cards.

But she makes little comments every now and then about how she can’t get the songs out of her head or when is this thing going to be over.

We try to rehearse during her lunch hour.

Not because we’re afraid of her or anything silly like that . . . just so that we don’t bother her.  This year, she took the week off.  Hmmmm.   I wonder what that’s about?  I am positive she missed seeing the show.  And the rehearsals.  And the kids running around the library.

Our rehearsals went great.  Just great.  With the exception of one day in which I had to pull two kids off the stage for goofing around.  Turns out I AM evil as one of my boys with special needs decided to call me when I took away his shoebox filled with a lego creation that he tried to sneak down to recess.  It’s really hard to sneak a shoebox, by the way.  I may be dumb, but I know a shoebox is not a snack.

The day of our play, though, was a different story.

One of my trolls fell down in the middle of it.

I’d love to say he fell because of his shoelaces.  Or because another kid got too close to him.  Or because he’s clumsy and that’s what first graders do.

We have our trolls stand on chairs behind the bridge so that they can be seen above everyone when we’re all singing.

And he fell off the chair.

I don’t know how it happened, but we heard a loud BANG! and then he disappeared from sight.

It was actually a cool trick.

But it wasn’t supposed to happen.

I heard a little giggling.

And then I heard crying.

A lot.  More than a lot.  He did the ugly cry and then he couldn’t stop.

And he had a solo and he couldn’t do it.  He came out from behind the bridge with the reddest face you’ve ever seen and the hiccup-sobbing-type of cry.

So my first troll got to go twice and he basically stole the show.

I had the fallen troll come sit next to my partner and I.  Down in front.

Well, his mom decided she should try to comfort him.

Even though he was down on the carpet IN FRONT OF EVERYONE.

So she came all the way to the front and then bent over to talk to him.

No squatting.  Or kneeling.  Or even bending a little.

I’m talking BENT OVER AND TOUCHED HER TOES BENT OVER.

One of my other parents told me that there is a full moon blocking her kids (she has twins in my class0 on her taping of the show for about five solid minutes.  And the play is only about 15 minutes total.

And our performance was in the morning so I’m not sure how that full moon got on there.

But other than that . . . the play went off without a hitch.

If you’re interested in the play, you can check it out {HERE}.  And if you’re super interested (and if I get enough comments about it), I’ll post the scripts, programs, and other stuff I’ve created to go along with it.
As for now, I have to finish my slideshow.  The parents are coming to watch it on Tuesday morning so I don’t have a choice.
Let’s just hope the full moon ends up on the cutting room floor . . .
« Sucker Punched
Talk About It Tuesday »