I only had two no-shows.

I had 26 families come to my first session.  My room was filled to capacity.  And the air conditioning kept going off.  And I talked very fast.  And probably a little too loud, as I have a tendency to do.  My husband often says, “Kristin, I’m right here.”  My family often says, “Kristin, we’re right here.”  It gets worse when I’m excited or nervous so I imagine the parents went home with a headache after my presentation.

I may or may not have said that I do my best thinking in the shower.

What?  Why?  Why did I say that?  Like I need the parents to picture me thinking in the shower . . .

Anywho . . . the parents had nice things to say to me (not to mention, I met the dad of the student that told me he calls me the “pixie teacher”.  Yep.) and I had lots of parents sign up to volunteer in the classroom.  That’s something.

And I’m looking forward to classroom donations.  We are not allowed to send out a Supply List like lots of you do . . . don’t ask me why.  My sister just spent about $75 on supplies for her three kids because she was told to.  The end.  Your kid needs this and that and the other and so you have to provide it.  Not the case here.  Nope.

We do get start up supplies from our school budget.  You know.  A box of crayons for each child.  Two dozen pencils for 30 kids (you do the math).  And some glue sticks and paper clips because those kids definitely need paper clips, otherwise how would they find them on the carpet and take them apart so that they become a weapon?  And we get one roll of scotch tape because kids need that.  Right?

We get a monthly supply budget which is anywhere from $1.00 to $1.50 per student.  It depends on the BUDGET.  And we can’t carry over so I usually spend a large portion of the end of every month carrying the one and erasing a pencil cap eraser because I exceeded my budget by 2 cents.

I have a section on my weekly newsletter called “Can you help?” which translates to begging in most languages.

And then, at P.I.N., I always make a post-it garden in the hopes that parents will take a post-it and return the item I’m wishing for.

This year, all my post-its were taken by the end of the second session.  Which wasn’t really a second session because only two parents came to that one.  So we sat at a table and talked about reality tv.  And the heat. 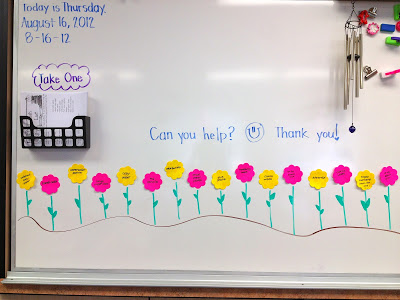 Not the cutest garden ever.  But I was in a hurry to go eat the dinner that
PTA provides for us every year before P.I.N. so that we don’t have to
go out and get something.  We had Chinese food catered in.
I am a fan of egg rolls.
I’ve also made a giving tree with apple post-its.  And a teacher with speech bubble post-its.  That last one is the most fitting, but I had flower post-its this year.
I also printed out a wish list that parents could take home with them.  You can get a non-PDF version {HERE} if you’d like to adapt it.
Do you do something similar?  Or cuter so that I can implement it next year?  Which I won’t think about right now or I might start getting nervous about it too early . . .
« Gone Fishing
Printing and Penmanship and other P words »