Ruh Roh.  That’s my Scooby Doo accent, if you’re not sure.
I sort of, kind of, in a round-about-way ruined my kidney table.  Although it’s not quite a kidney.  It’s more of a . . . . boomerang.  We call it the back table.  It’s where all my crap  teacher stuff  piles  the best learning happens!
Here it is before the, uh . . . um . . . before the “incident”.  We’ll call it the incident heretofore. 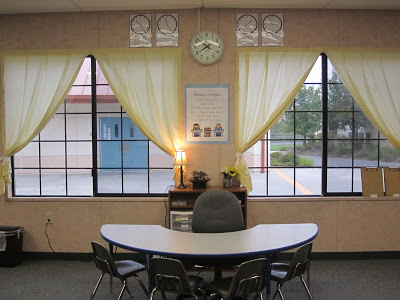 It’s also in a different location here.  That’s not the problem.  But look at how pretty it is.
Then I covered it with black butcher paper for Open House.  Not a tablecloth.  That’s important to know for later in the story. 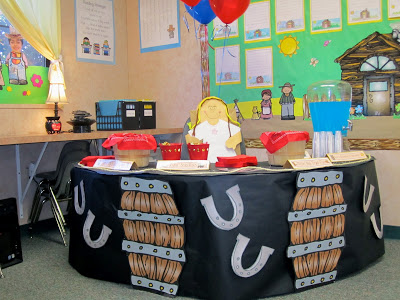 When I tore off all the butcher paper on Friday . . . this is what I found. 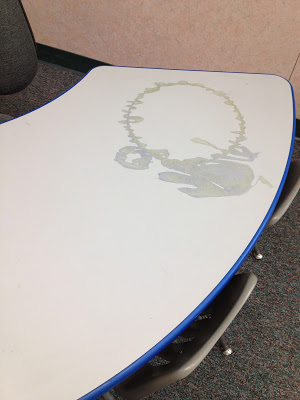 People, that’s permanent.
I tried.
I scrubbed.
I don’t know what was in my creek water, but I think it was lethal.  This does not bode well for the over one hundred people who drank it at Open House.
It ate away at my table.  Like, for real.
I was dumbfounded.  That means — found dumb while I stood there staring at my table.  Found dumb.  Stupidfounded.
Look at it for last year’s Open House. 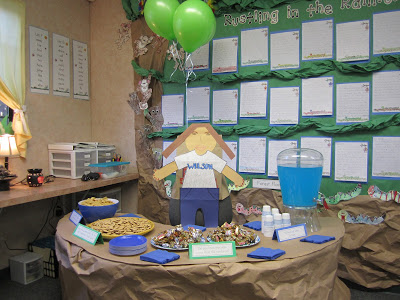 That’s tan butcher paper.  From the same company.
Except that’s not creek water.  It was pond water because I had a Habitats theme.
Can I let you in on a little secret?
It’s not creek water or pond water.
It’s blue gatorade.
Gasp.  Shocking, I know.
And I have never had a problem with it.
But something between the blue gatorade and the black butcher paper combined together to create a flesh eating table-disintegrating solvent to make me get in trouble so that I am a stress case with one more thing on my plate!!!!!!!
I told the hubs about my problem because he is known around this house and my classroom as Mr. Handy.  And if anyone can solve this problem, he can.  No doubt.
This is what he said.
“Why didn’t you use a tablecloth?”
I think I rubber-necked at him.  Which means my head spun all around in defensiveness and anger and shock.
Why didn’t I use a tablecloth?
Does that help me right now?  That’s like asking someone whose computer crashed if they backed up their files.
“My computer crashed!  I lost everything!” I cried.
“Didn’t you back up your files?”  the hubby asked as he pushed his glasses up his nose with one finger.  (He doesn’t wear glasses.  I say this for effect.  And this may or may not have happened when I had a PC before my Mac.  I’m not admitting anything.)
Why didn’t I use a tablecloth?
BECAUSE.  I got tired.  I didn’t want to make one more trip.  I’m cheap.  Black butcher paper worked.
Just shut up.
So.
He says he’ll take a look at it.  This summer.  Or next year.  Or whenever.
In the meantime, I know that Jennifer at First Grade Blue Skies covered her kidney table in contact table.  Check it out. 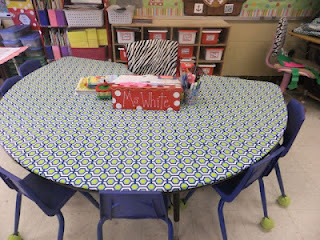 This is definitely a possibility.  I just don’t see how in the world she covered it so neatly.  With nothing amiss.  I don’t get it.  I’ve already bugged her for step by step directions.  So I can tell Mr. Handy.
And I have to say that I truly loved my gray tabletop.  Loved it.  Wah.  🙁
I just can’t believe that I ruined it.
RUH ROH.
Any ideas?  Any tutorials?  Anyone make any other similar mistakes today?  It’s a little lonely in the boat right now.  I’m just kind of rocking back and forth . . . I could use a friend and a cocktail right about now.
Thank goodness for The Bachelorette.
« Sunday Stuff
Talk About It Tuesday »