Before we begin, I have to ask you an important question.

Do you watch Parenthood?

Of course you do.  It is only the greatest show on TV next to Scandal, Revenge, Downton Abbey and whatever else I have on Tivo.

Well, I was wondering if it was possible for Joel and Juan Pablo to be related.

Take a look for yourself: 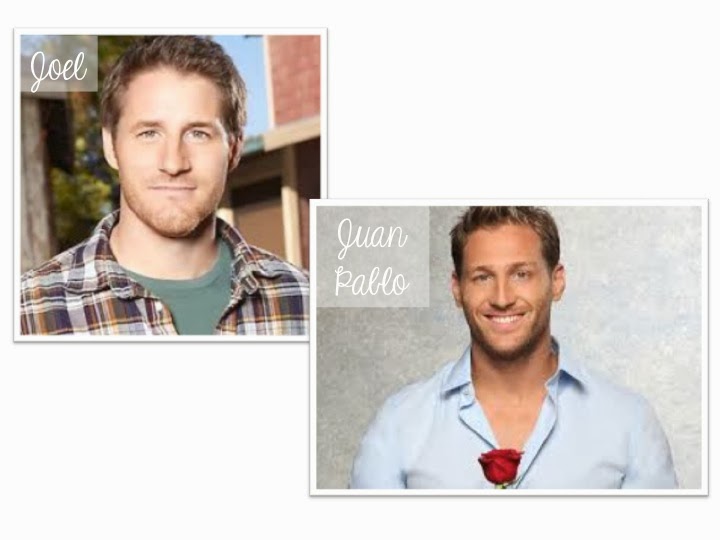 Okay, so the girls and Juan Pablo went to Vietnam.

It looked beautiful.  And tropical.  And warm.  In other words, perfect weather for scarves.

It’s true.  Most of the girls wore infinity scarves.  That’s because they’re fashionable and the weather doesn’t matter.  I know this because Stacie, my salesgirl at Nordstrom, told me this, and so now I have a a general plethora of infinity scarves, plus the regular old run of the mill kind.  I have options.  Tropical and warm weather?  No problem.  There are light-weight scarves.

Renee got the first one-on-one date, but she wore a tank and short shorts with no scarf.  I don’t know what my Nordstrom girl would say about that.  She didn’t give me her number.

Juan Pablo pedaled her around in a pedi-cab.

Then they stopped at a dressmakers.  Renee was sweating a lot and had her measurements taken with Juan Pablo watching.

Uh, no.  No one is taking my measurements with anyone watching, ever.  Even the person taking the measurements would have to be blindfolded, and then I’d just make up some numbers for my measurements because, really, who gets measured anymore?

Juan Pablo got Renee a fan for all of her sweating.  And then he wanted to get gifts for their children which made Renee want to cry.  She is falling hard.  Hard.

I was worried she was actually going to physically fall down, hit her head, and then realize she loved him more than he liked her.

Renee wore her custom made dress to dinner.  Juan Pablo liked it.  They had a deep discussion and then Renee started sweating again.

Juan Pablo said Renee’s eyes were hypnotizing and that he thought she was beautiful . . . that they want the same things and they’re on the same page.

They weren’t technically on the same page because Renee was dying for Juan Pablo to kiss her, but he had made up his mind that she was a mother of an eight year old son, and that the eight year old might see this show six to eight months after the fact, and think Juan Pablo was his step daddy.

I can see how Juan Pablo would worry about that because I’m seeing the show six to eight months after the fact, and I think Juan Pablo is my boyfriend.

Renee got the rose.  Not a kiss, but a rose.

Next up was the Group Date.

He kissed her as soon as he could.

The other girls were not okay with that.  At all.

Next, they went to some guy’s house and put on straw hats that kept tilting to the side.  I couldn’t stop obsessing about those hats with my two-sizes-too-small-head and wondering if they were custom made, and would someone have had to take measurements of my head and what in the world is going on with all these measurements?!  And then they picked their own vegetables for dinner.

Andi was stressing out and was super upset that she hadn’t been on a one-on-one yet.  But then Juan Pablo told her to trust him and DANG, if that didn’t just make her feel as calm as an ocean breeze.

However, later, Juan Pablo singled Claire out first for some alone time.  This really messed with the girls because they felt that Claire and Juan Pablo had already spent too much time together and that’s not fair, etc.

But, anyway, he’s the bachelor and that’s who he whisked away.  Somehow, they ended up in their swimsuits and took a dip in the pool.

Next up was Charleen.  And she was really hoping Juan Pablo would see her as a Panda in a room full of brown bears.

That’s what she said.  A Panda in a room full of brown bears.

Swiss in a room full of cheddar.

Chardonnay in a room full of Merlot.

Panda in a room full of brown bears.

Charleen didn’t want to show all her cards so she played semi-hard to get.

Then Juan Pablo and Andi had a chit chat with lots of kissing.

So.  They headed back to the hotel.  And Claire felt like she needed to cross one more thing off of her bucket list.

No, not swimming with sharks.

No, not going to Antarctica!

So she snuck over to Juan Pablo’s and asked him to go swimming and THEY DID!  Even though it wasn’t an Official Bachelor Date! This is unheard of!  This is an outcry!

Wait.  This reminds me of the season when that crazy brunette girl went skinny dipping with the Bachelor and everybody hated her.  Who was that?  Come on!  Someone must remember.  Maybe I should go into my archives and dig it up.  Or maybe you can just tell me.

So.  There they were.  In the warm ocean.  Kissing and holding each other.

And then Claire said in her interview, “We just went for it.  And I don’t regret it.  Pure Bliss.  In every way.”

Hmmm.  Was she talking about the warm ocean?  Or something else?

Well, how am I supposed to know because then she started talking about baby giraffes on wobbly legs.

Nikki’s one on one was next.

And their date made me feel like I changed the channel to an episode of the Amazing Race or Survivor.  Because their date was to repel down a mountain into a black hole of sorts.  And Nikki was more afraid of the repelling instead of all the bugs and things that could have been lurking.

I have repelled before.

Really.  I have.  I may have mentioned this.  It was on a mountain in Oklahoma.  And if you don’t think Oklahoma has mountains, then you have never repelled down one in Oklahoma.  Mountain, cliff, hill, I don’t care, if you have ropes because jumping off a surface would kill you to death, well then — case closed.

Nikki had to overcome her fears, Juan Pablo had to help her, you know the rest . . . she couldn’t have done it without him, let’s kiss half way down, blah blah blah, this is NOT A DATE, THIS IS CERTAIN DEATH.

They had dinner later, and Nikki talked about her nursing job, and how she is not a morning person, and how she is ready to be a stepmom.  Juan Pablo was drowning in all of it and then he gave her the rose. He likes Nikki the Nurse.

The girls took a little boat ride to a beautiful location filled with colorful lanterns for the Rose Ceremony.  It was really pretty.

They made a toast to start off the night.  Claire said, “Cheers to finding love, being loved, and making love.”

Juan Pablo has a bunch of favorites.  He is lost.  He really likes all of the girls.

Renee finally got her kiss.  Once she told Juan Pablo that her son wouldn’t be mad at him, he just pounced on her.  Renee was thrilled.  She said it was like right out of a movie because she was in the middle of a conversation and he just started kissing her in mid-word.

What in the world is edge wise?  It doesn’t look right and now it doesn’t sound right, but I know it’s a real thing, because people are always telling me that they can’t get a word in edge wise.

Anywho, Juan Pablo knew it was the right time to kiss Renee.  But then he started worrying that he took it too far with Claire and that it wasn’t fair to the other girls.  Exactly what happened out there in that ocean?!

Juan Pablo tried to explain to her that it wasn’t fair to the other girls and that it wouldn’t be good if his daughter saw it . . . so Claire cried and felt stupid and was embarrassed.

Well, I don’t know.  Whatever.  I don’t know what happened in that ocean, but she was being sneaky with the whole Ocean Bucket List Rendezvous so there you go.

She was a mess.  She cried and cried, but she told the girls it was allergies.  Ha.  They knew.

Juan Pablo found her and told her it was all fine.  But she was really upset because all he needed to do was tell her no, he didn’t want to go in the ocean with her.

It was just nuts.

Juan Pablo said goodbye to three girls we didn’t really know.  And he cried.  Which was really sweet.  But man, he was emotional.  I can only take so much.   The girls were teary eyed, too.

Alli, the nanny, was super sad.  But she thinks Juan Pablo deserves the best and hopes he will find someone.  Ohmyword.

And the Dog Lover went home, but they didn’t interview her.

They leave for New Zealand next week.  Claire and Juan Pablo are going to rehash the Warm Ocean Bucket List Shenanigan and Charleen looks like she is threatening to leave.

In other words, it looks like a fabulous episode.  🙂

What are your thoughts?  Do Joel and Juan Pablo look like they’re related?

What in the heck happened in that ocean?

And by any chance, did you watch Vanderpump Rules?  Talk about DRAMA!