Did you know the Real Housewives of Orange County returned last night?

And it did not disappoint.

And I would like to go on the record and tell Vicki Gunvalson that Oklahoma is not an invisible state, I lived there for goodness sake, I visit there every year, and I eat good food including Braums, Ted’s, and Taco Bueno when I am there!  Excuse me and thankyouverymuch and that’s quite enough of that talk!

I finally remembered to take pictures of what I wanted to blog about!  A very relaxing productive weekend plus trashy quality tv is very helpful to the memory part of the brain.  I’m pretty sure I read that somewhere.  If I remember correctly.

Surely you’ve heard of Rick Morris.  I have talked about him before.  I’m pretty much his number one fan except that I have never met him and he has no idea.  This is a habit of mine.

Well, he is pretty much a Classroom Management Guru.  A wizard. A force to be reckoned with.

And I either saw this idea in one of his books (I read 4 of them back to back to back to back on the first two days of my Spring Break a few years ago because I am a nerd and I couldn’t put them down – true story) or I saw it on his website.

Or, quite possibly, I might have just made this up.   But I don’t think so.

I’m not quite the guru.

Now that I’ve set you up, are you ready?

Wind Chimes Aren’t Just For Wind
or Porches or Back Patios!
They’re for your Classroom, too!
Who wants to embroider that on a pillow?
But it’s true! 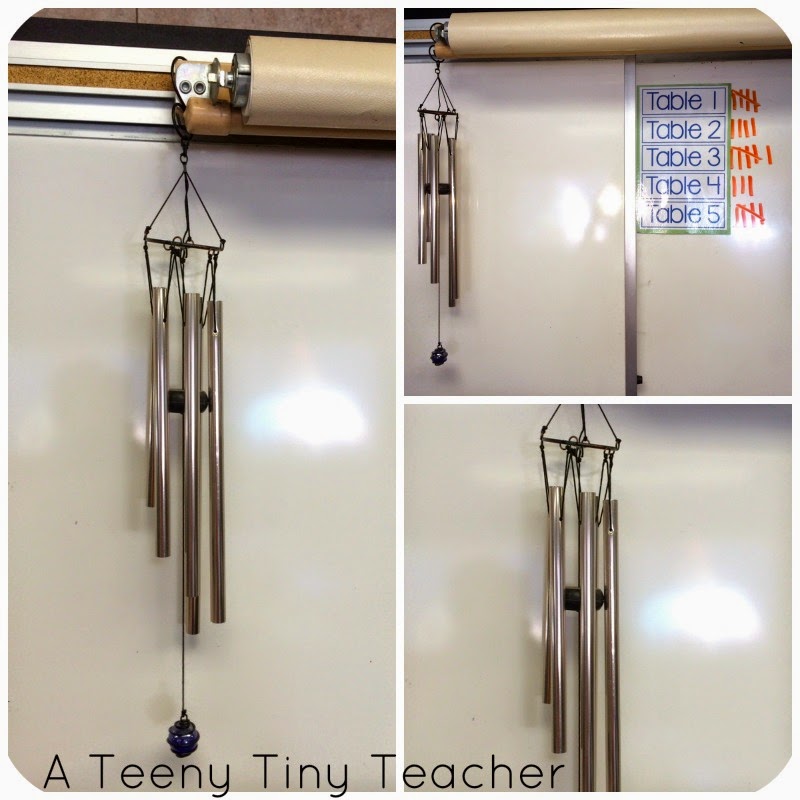 I have wind chimes in my classroom.  And there is no wind in there.  (At least not the weather kind if you know what I mean.)
I got these wind chimes at Michaels about five years ago or so.  Now is the time to get wind chimes because it’s spring.  SPRING!
My wind chimes didn’t actually look like that when I first got them.  There was some big ole huge monstrosity thingamajig at the top that was like a blue planet of some sort and I am happy to say I bought it anyway because I had vision.
My vision was cutting that monstrosity off as soon as I got out of the store.
So I did.  Then you can see that I was just able to hook the chimes right up over the maps hanging off my whiteboard.  Sadly, that is not a screen.  But maps are better than screens because maps are educational, whereas screens are just white and blank.  Plus I can’t really reach them, but that’s neither here nor there.
Here’s why you might need some chimes.
Rick Morris says if you talk too much, your kids will start to tune you out.
Uh oh.
This may be why I always ask my kids to come back from La La Land.
Once, one of my extremely mature and focused girls raised her hand after I asked a little guy if he was in La La Land and if so, could he please return to our classroom, and when I called on her, she said, “Where exactly is La La Land?”
She had never been there because she was so attentive all the time.  I visit La La Land during every staff meeting, practically.
Well . . . I try very hard to only use my voice for teaching.  Not managing.
Which is where the wind chimes come in.
As you can see in the picture, the chimes are right next to my Table Points sign.  So rather than say I Love The Way Table 2 Is Working So Quietly, I just ring the chimes.
And when I ring the chimes, every kid looks up to see which table is getting a point.  And then they want to do the same thing that table is doing so they all shape up and I can carry on with the business of teaching.  Because that’s my business, people.  I teach.
It works like a chime charm!
I usually only do Table Points during third trimester.  But my chimes are always up.
During first trimester, we’re working for gold tags individually, but also as a team and I tally mark how many we earn as a team throughout the day.  And every time I make a tally mark, I ring the chimes.
During second trimester, we’re usually working on getting Rudolph to his nose or the Angry Bird to the Pig or what-have-you, and I ring the chimes whenever I move one or the other.
I’m telling you, chimes are a charm!
I would die without my chimes.
Plus they sound very musical and lyrical and light.
It’s practically magical.
When the kids aren’t talking.
🙂
« Product Swap AND a very cool Giveaway!
Five for Fraturday »