Here are the “winners” of my random drawing for the Math Fluency Assessments Pack. 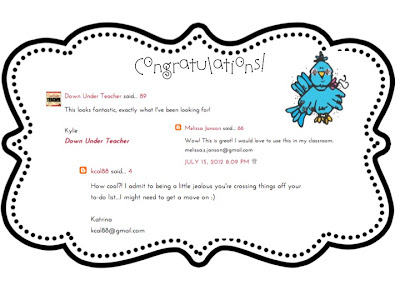 A couple of things about the Math . . . I was so sick of it that when I wrote yesterday’s post, I was afraid I wasn’t clear.  So I’d like to explain some things.  In the interest of being thorough.  Unbelievably, I don’t think I went on and on about it enough yesterday.  I know.  I’m dumbfounded, too.

1.  I think the best thing about this math is that students only test when they feel ready.  Over the years, I’ve always had one (or two or seven) students that would freak about the timed tests.  They would either hyperventilate before the test, during the test, or cry afterwards.  It was too much pressure, apparently.  I don’t know why this would happen.  Especially because if I had recess duty earlier, my Mad Minute might turn into Mad Four Minutes.  Or Mad Five Minutes.  Or what have you while I took a mini break.  I certainly wasn’t putting any pressure on them.  I blame society.

When they do bring this new version back to class to be tested, they’re not exactly timed.  I do want my kids to be fluent so I feel they should be able to produce the answer in about one to two seconds.  You know – like a sight word.  When a kid reads the word “the” as “the” instead of “tuh huh eh”, I know they know the word.  The same is true for a student who answers 8 to the flashcard 4+4 compared to someone who says, “Um, uh,”  Sigh.  Scratch head.  Count on fingers behind back.  Count again.  “Eight?”

2.  I like the idea of a computer program . . . except that I only have two computers in my room of which only one is nice and easy going.  The other one is old and grumpy and we have to tiptoe around it.  On most days, I speak nicely to it, but there are times when I have to show it who’s boss.  Which is a technology person from the district.  Not to mention, not all my students have access to a computer at home.  Sad, but true.  And again, I worry about the kids counting on their fingers as fast as they can in front of the computer.  I don’t know.

3.  That’s all.  Again, I hope I don’t sound holier than thou.  I’m just not going to grade those tests again.  Or look up data on a computer that may or may not be working that day.  Along with the internet.  Does that happen at your school?  Then I have to crawl around on the floor under the counter and see what’s going on with the cord.  And then I inevitably find mice droppings and freak out.  Or I find gross bugs and freak out.  Or a cobweb gets all over me and I freak out.  Or I find forty-two pencils because my kids promised me they would keep our pencils organized, but instead, they lost them.  So I freak out.  And then I say very calmly, “The computer isn’t working.”  And when no one is looking, I hit it.

Onto the Wine Trolley which is always working! 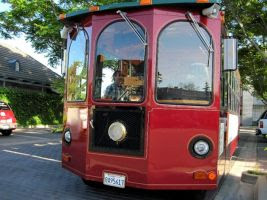 All right, people.  This is the BEST thing ever.  It’s in downtown Orange every Friday night.  Although I think my friends and I got our reservation back in May.  Six of us (teachers) were supposed to go, but we ended up with five of us.  One of us doesn’t drink wine (I know.  What?  I don’t understand that language, either.) so she drove us to and fro.  You know, safety reasons and all that.
Here’s how it works.
You get on the trolley.
You get your first sample of wine.  Handed to you.  There’s wine people that come up and down the aisle.  Trolley attendants, perhaps?  Best People Ever, maybe?
And then the trolley takes you on a 12 stop restaurant tour.
You don’t ever get off the trolley (except they stop about halfway through so you can use the facilities and snap some pictures.  I was worried about that initially because the trolley doesn’t have a restroom and I have the bladder of an infant.  Bring wine into the picture and it’s all over.).
The managers or owners of the restaurants get on the trolley and talk about their food . . . and then they give you some!!!  They’re supposed to be sample sizes, but they really aren’t.  I mean a full size taco does not a sample make.  Neither does half a cheeseburger.  I don’t know what you would call the size . . . bigger-than-sample size?  Well-worth-it size?
Here’s what I had:
turkey sandwich
frozen yogurt
cheeseburger
rice pudding (which I’d never had in my life and I discovered I liked it for a little bit.  Eventually, the texture got to me and I had to stop eating it.  And wash it down with some wine.)
pesto pasta (The owner was Italian – not surprising – with the cutest accent ever.  I must go to this restaurant in the near future.)
tomato caprese
garlic knots (To die for.  I took two.)
taco
fudge from Rocky Mountain Chocolate Factory (holla!)
pot roast with mashed potatoes (of which I had none.  Nope.  I’m not a pot roast type of person.  I’m told it was delicious.  All I know is that I do not like it, Sam I am.)
Pulled pork
Cuban rice with fried plantains (I’d never had fried plantains before.  Um, can you say delicious?  I think if they had fried the rice pudding, I could have been on board.  Maybe the pot roast, too.)
I think that’s it.  We went to 12 restaurants so it’s hard to remember everything.  Meanwhile, we sampled seven types of wine from whites all the way to red.  It was THO MUCH FUN!!!  The trolley seats 26 and we want to get 26 of us on it at once.  Can you imagine 26 bloggers on that thing???
I highly recommend it if you’re near Orange.  The cost is only $50.  I think that’s so worth it considering that I was basically rolled home.  Put a cork and a fork in me – I’m done.
My friend lives near Orange so we went back to her house and hung out till about midnight or later . . . I don’t know.  I think I was in bed by 1:00 or something crazy like that.  Which is why it was hard for me to wake up on Saturday and blog.  It had nothing to do with the wine.  Especially because I had just seen my cardiologist that day and we discussed how I am limiting my alcohol.
Clear throat.
Shhhhh.
« Math Fluency
Talk About It Tuesday »