Hey people!  I only have three days left until my three week vacation.

We get out this Friday.  At 3:00.  Well, after the winter party.  And after all the sugar that we’re technically not allowed to have so we have to bag it all up (or saran wrap it) and send it home, but in the meantime, all the kids have licked the icing anyway, and eaten the candy, and picked stuff up off the floor, so our no sugar rule is actually a technicality.

But I shall survive.  And then I shall be free.

In the meantime, I’m trying to pretend that it’s just a normal week.

Also, I’m afraid of the Curriculum Cops.  You would be, too.

So today, we worked on contractions.
This is the song I sing for contractions.  I don’t know where I got it.  It’s to the tune of Mary Had a Little Lamb.  I don’t have it typed.  It’s in my head.
I’m the first word, don’t change me
Don’t change me
Don’t change me
I’m the first word, don’t change me
No!  Leave me alone!
It’s hard to sing the second part because it has too many words so you have to sing fast and don’t take a breath, or it won’t work.
In the second word
Certain letters are taken out
Taken out
Taken out
Certain letters are taken out
An apostrophe remains!
Please don’t hold me accountable if it doesn’t come out right in your classroom.  I do a combination of singing/talking/yelling/theatrics.  It’s sort of a gift.
Then I pulled out the FREE contraction puzzles that Heather from Heather’s Heart showcased last year. 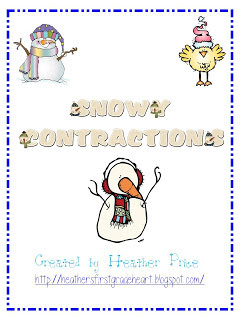 Click {HERE} to check them out.
And I’m pretty sure that I already talked about these before, too.  So we may be having a re-run post today and I don’t even know it.
Yesterday, I was told that a student teacher in upper grade needed to come down to the jungle a primary classroom for some observation hours . . . and sure enough, I was chosen as a room for her to visit.
So I pulled out these contraction puzzles, and we played a game in which we had to find our partners, and then we played the game three times in a row.  IN A ROW.
And I said, “Stop checking to see if your puzzles fit.  Start looking AT THE WORDS!” sixteen times in a row or something like that.  That’s just a ball park figure.
And the student teacher never came.
Even though it was awesome.  And engaging.  And the room was buzzing.
I shrugged my shoulders.  Oh well.  Whatevs.
I passed out the curriculum worksheet on contractions, and sent the kids back to their seats for independent practice, and guess what?
Yep.
In walked the student teacher.
She stayed about ten minutes and left.
I’m trying not to take it personally.
But then one of my girls had two things to say to me on the way to recess.
1.  “I’m almost as tall as you!”
(No – she’s not, actually.  She has AT LEAST two inches to go.)
2.  “I think you’re about the same age as my GRANDMA.  Yep.  Probably EX-actly.”  Then she nodded her head and skipped off to recess.
I’m trying not to take that personally, either.
I mean, it’s not my fault it was CRAZY HAIR DAY and I tried something different, is it???  I mean, is it???
« 12 in 12
12-12-12 »