It is Sunday.  I am working like a dog around here trying to get everything printed, laminated, and cut for the first day of school on Tuesday.

Luckily, we have a teacher prep day tomorrow so whatever I don’t finish today can be finished tomorrow.  While I’m standing in line for the copy machines with everyone else.  It should be a fun party.

Other than that, I’m ready to go.  I left up all my bulletin boards from last year which saved me a ton of time.  The only major overhaul that I did in my classroom this summer was my classroom library.

I am LOVING it.  It makes me SO HAPPY! 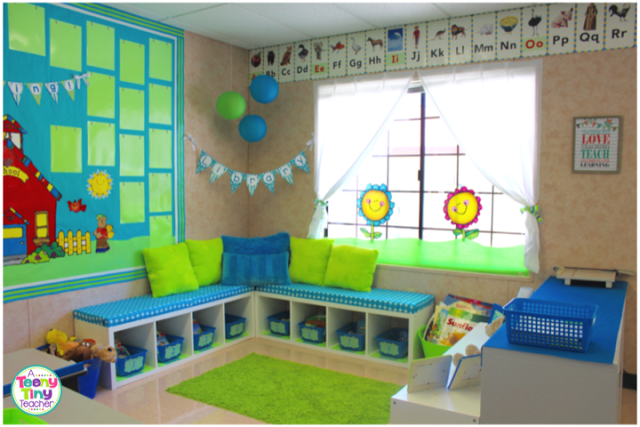 Now, let me give credit where credit is due.
My teammie, Heather, did it first.  She got the brilliant idea of buying tall bookcases from Ikea and turning them over onto their sides.  Here’s her classroom library: 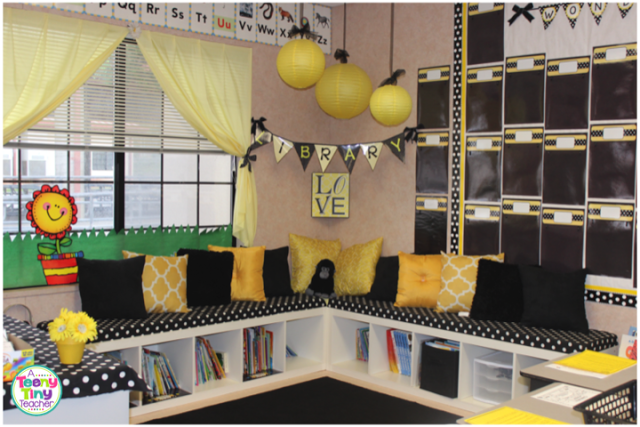 Heather’s Library
She did her library makeover two years ago and, at that time, the bookcases had five shelves.  Heather’s whole classroom is black, yellow, and white.  It’s adorable!
Last year, my teammie, Laurie, redid her library.  Here’s hers: 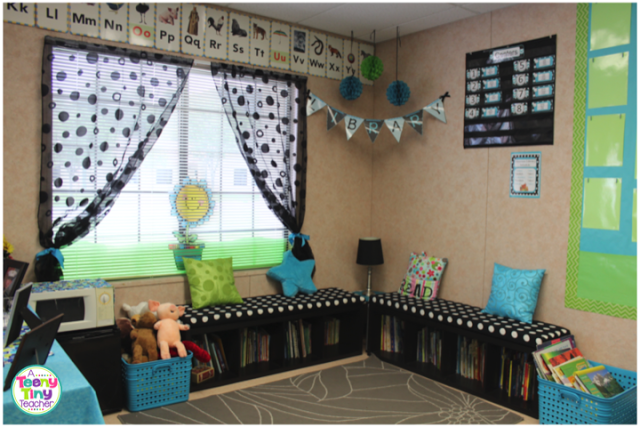 Laurie’s Library
Ikea only had four shelves on the bookcases last year (and this year, too).  Laurie classroom is turquoise, lime green, and black.  I love it!  I want a star pillow so bad . . .
This year, it was my turn for a library makeover.  And I lucked out because I was able to buy the Ikea bookcases on sale.  So I got three of them.  Two for benches and an extra one for displaying fun things, as well as more storage for books.  Apparently, I have a lot of books.  Gobs.  Tons.  Gazillions. 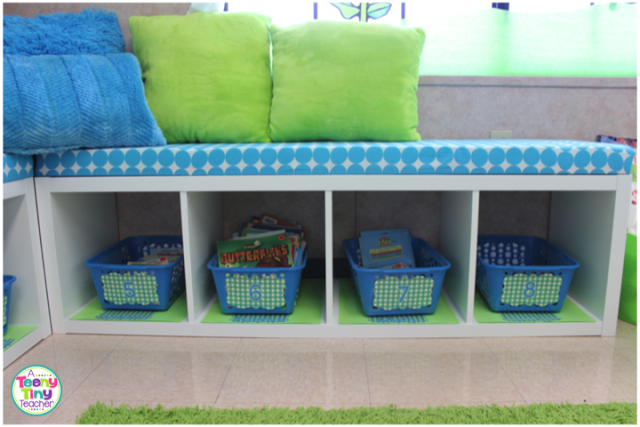 I made my labels with my Silhouette cameo!  I feel very lah-di-dah about that.  You can’t see me but I’m swinging my ponytail in a lah-di-dah manner.
The baskets were $1 from the Dollar Tree.  They were not on sale.  Each one was a whole dollar. 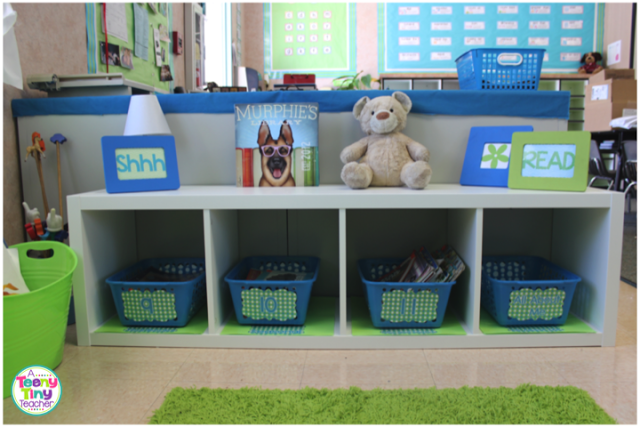 Storage bookcase.
Not for sitting.
I really hope a kid does not try to sit here.
We’ll have to see how it goes. 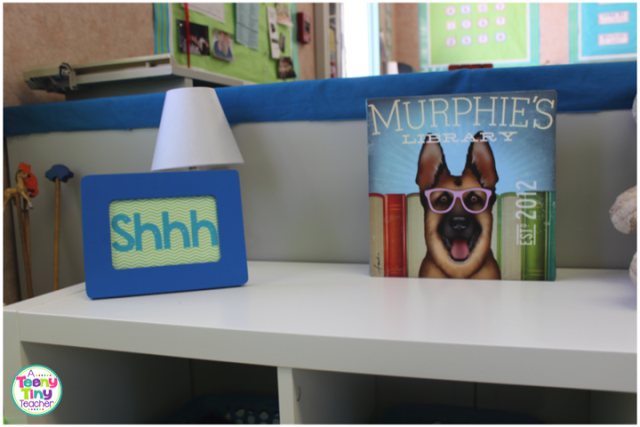 A parent gave me the Murphie’s Library sign.
It’s canvas.
It’s my absolute favorite thing in the library. 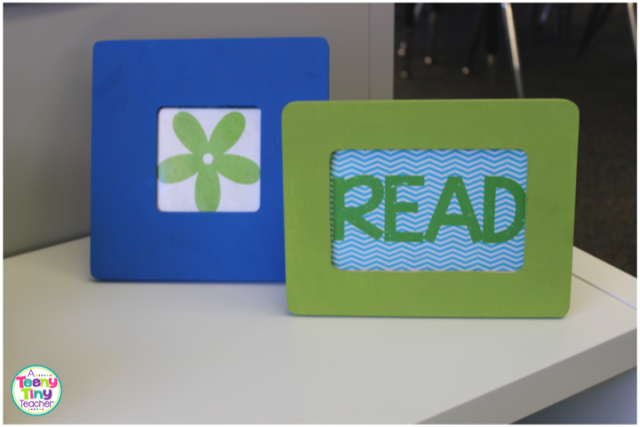 I made these last year.
The frames are from Michael’s and were $1.
I used some kind of paint.
I printed out the stuff for the inside on my computer.
That’s about as crafty as I get. 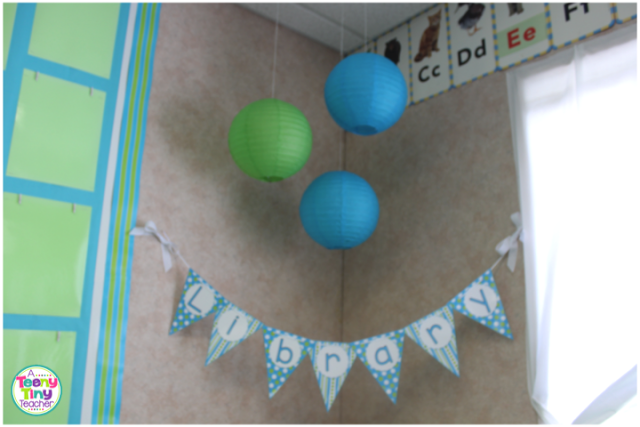 The lanterns are new.
To be honest, I tried using some kind of tissue pom pom ball things first.  But they didn’t come ready-made.  I was supposed to peel back each layer and bring it to the top or the outside or the bottom, alternating this and that . . . but it ended up looking like a wad of trash when I was done with it so I gave up.
The second thing I tried were these flat disc type of things.  Those things had actual plastic screws and tape and this and that and they wouldn’t stay flat.  I don’t know what I did wrong but they also ended up looking like a wad of trash.
Especially once I threw them away.
The paper lanterns were the easiest to assemble and I highly recommend them if you are not a crafty person. 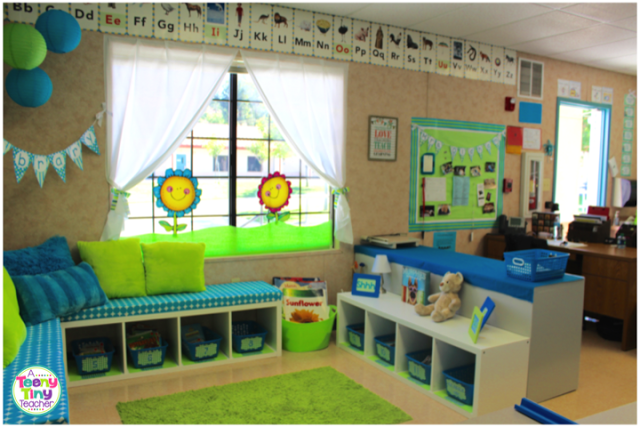 So there you have it.
Now, I know you’re going to ask questions about the benches.  I know this because I put this on Instagram and I got a ton of questions.
So I’ll do my best.
1.  You can find the bookcases {HERE}.  Sadly, they are no longer on sale.  When I went to order them, the delivery charge said it was going to be about $130 which is more than two bookcases put together and made me have a mild heart attack.  So I suggest getting a husband named Steve who goes to pick them up for you.  And then later, when you decide you need a third one for storage, he goes and picks that one up for you, too.
2.  I went to Joanne’s Fabric and bought a roll of foam.  It’s kind of pricey.  It’s more than you’d expect foam to be, that’s for sure.  And I bought fabric.
3.  Steve found some wood lying around in our garage.  He cut two pieces to the exact width/length of the bookcases.  Then he used a turkey carving knife to cut the foam to the exact width/length of the bookcases.
4.  He put the foam on top of the wood and then wrapped the fabric around it.
THERE WAS NO SEWING DONE AT ALL.
I DO NOT SEW.
5.  He staple gunned the fabric to the bottom of the wood.
6.  I watched.  I kept saying what can I do? and let me try and are you sure you don’t need my help? while drinking a glass of wine.
7.  The corner is pretend.  I’ve got two cases of water in the “hole” (we’re required by our district to have drinking water in our room in case of an emergency so that’s where I’m storing it now) and Heather gave me a square cushion left over from her foam . . . and I just need to staple gun some fabric onto it.  But I haven’t done that because I’ve been doing other things.
8.  Just to be clear, Steve wanted to do something fancy with the “hole” and make a corner seat and blah blah blah but I was impatient and just wanted it done!
The End.
The wood keeps the cushion stable.  It doesn’t slide or go anywhere.  So that’s why he used wood.
Laurie’s husband and Heather’s husband backed the bookcases so they weren’t open.  I didn’t do that because my books are in baskets and you can’t even tell there isn’t a backside.
I think that’s everything!
Obviously, if you have any other questions, leave a comment or email me!  🙂
Alright.  I’m off to catch up on Bachelor in Paradise while I cut some more things . . . I missed it last weekend when we were in New York.
PS  I still have my kidney stone.  I had a CT Scan today (yes, on a Sunday, how weird) and hopefully we’ll know more later this week.
« Five for Fraturday
Extra Cubbies »