Well, I did it again.

I skipped a week of blogging.

Life was happening all around me, I was living in the moment, and blogging took a back seat.

Kerry and her kids were in town, and I spent the last couple of weeks having fun and spending quality time with my family.  It was AWESOME!

Kerry makes me laugh like no other.  The second day they were here, I traded cars with Steve so that we could have a third row and fit more people in our car.  Well, Steve takes Murphie to the park every single day (without fail, rain or shine, it is their thing) so his car had a ton of dog hair in it.  I don’t know if you already know this, but German Shepherds shed.  A LOT.  A LOT A LOT.  The hair that comes off of her is no joke and even though Steve brushes her every day at the park (or so he says), it is never ending.

Kerry offered to vacuum out his car while I did who knows what.  I don’t know what I was doing and why I didn’t help.  Beats me (but talk about a smart move on my part)! I said sounds good to me, let me find the vacuum that I almost never use because I am spoiled and I have a housecleaner, oh, here it is, here you go, see ya later.

But Kerry didn’t let me leave because she wanted me to show her how to attach the attachments, or show her where the attachments were, or who knows, I don’t know, it’s a vacuum, surely this is self explanatory, it’s not like it’s a piece of IKEA furniture we have to put together, for crying out loud.

THIS VACUUM.  I think it’s a Shark, maybe, possibly, and all I know is that I bought it from Target, and I use the main function of it in between my housecleaner visits.  She comes once a week (I know, I know, I am so spoiled, I feel embarrassed telling you this, but also feel the need to tell you this so you don’t think I live in a pig sty full of dog hair) so I don’t have to vacuum all that much.  We only have carpet upstairs, as it is.

Well . . . that vacuum got the best of us.  We were outside, sweating in the 100 degree heat at 10:00am in the morning, in the driveway, trying to figure out the attachment situation when Kerry said Why am I such an idiot? and you guys, that was it.

I mean, I’m laughing now as I type this.  It was how she said it and what she said, and the look on her face as the hose of the vacuum was stretched to beyond, and I don’t know, that girl is just good for me and my soul.  She just makes me so happy and now I feel like crying because I miss her.

We drove back and forth to my parent’s house every single day, and saw my older sister (Lisa) and brother (Jason) on the daily, too.  It was A LOT of family time, but I’d say, on the whole, a good ole time was had by all!  🙂

We went to Newport Beach one day to eat at Ruby’s on the pier. 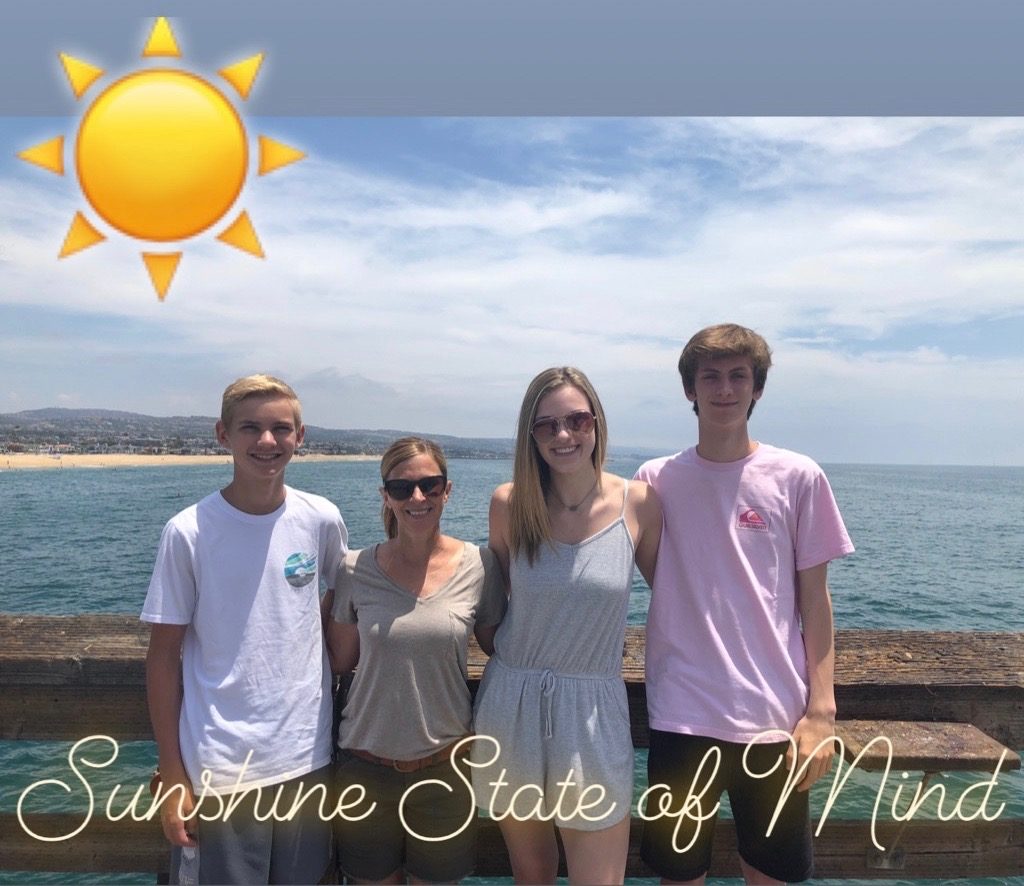 At this point, we were all hangry as we waited to sit up top so we could have a nice view.  It was worth it.  🙂  It was beautiful down at the beach, and we walked around afterwards, and did a little shopping.  I spent entirely too much money on the softest, coziest pink hoodie sweatshirt ever that I cannot wear for months to come, unless I turn my A/C way down and shiver.  It was a complete impulse buy and the only reason I really bought it was that I couldn’t get over how soft the darn thing was. 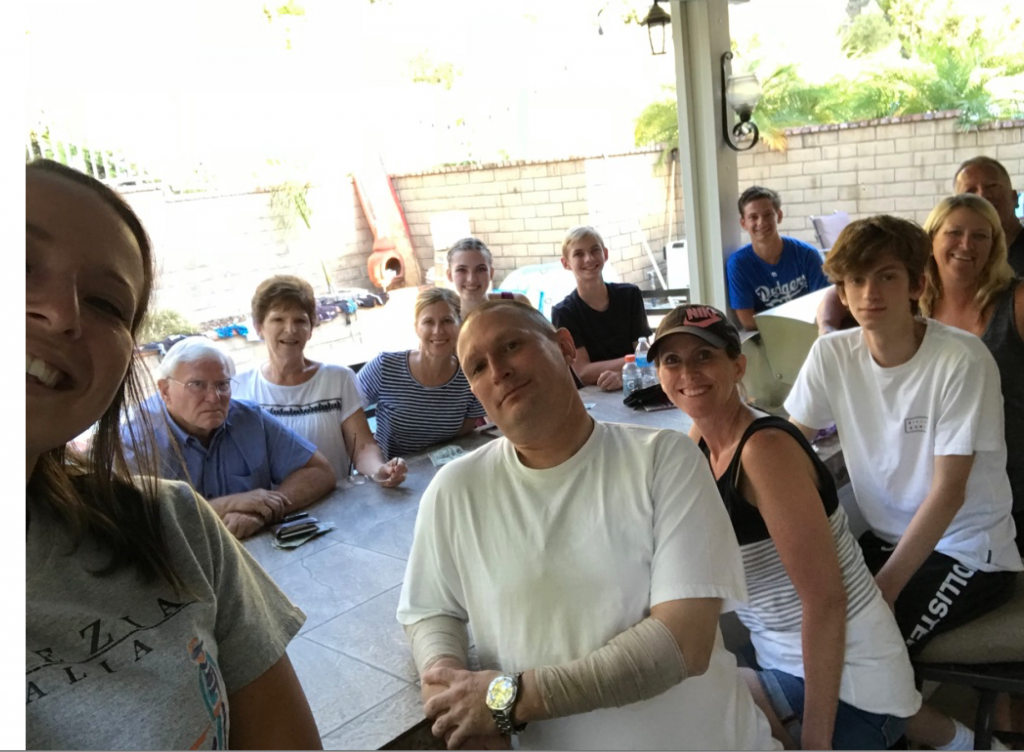 This is a picture of a bunch of us at Lisa’s house.  We swam all day, ordered pizza for dinner, and then played Left, Right, Center.  My niece, Madison, won the whole pot!  It was loud and fun!  Don’t mind my dad back there, making an angry face at the camera.  He thought he was so hilarious.  🙂

I don’t have a picture of this one, but over the weekend, Steve smoked a brisket, ribs, and pulled pork, and everyone came to our house for the day.  It was DELICIOUS.  I’m telling you, that boy knows his way around a BBQ smoker.  We also had green beans, twice baked potatoes, and he made cornbread FROM SCRATCH IN A CAST IRON SKILLET following the Pioneer Woman’s recipe.  My mouth is watering just thinking about it.  My mom made a yummy lemon cake with lime jello – it was a total memory from my childhood once I took a bite.  I’m not much of a lemon/lime person so I was hesitant, but after that cake, and then the Nothing Bundt Lemon cake, I’m thinking I’m more of a lemon/lime person than I give myself credit for.  Who knew?

By the way, because we ate a lot (it’s how my family rolls, we make decisions about the events of the day around food) Kerry and I walked and walked.  I’m used to walking.  I walk on my treadmill at least five times a week for a minimum of 4 miles a day (I’ve kept this up since January) and it’s fine.  I just walk and walk and watch a show on TV.

Walking with Kerry requires walking outside IN THE HEAT.  We walked almost every single day that she was here, usually 3 or 4 miles in the morning, and then a couple of miles at my mom’s house at night.  I KNOW!  We would walk and talk, and it was SO NICE having someone to walk with.  🙂  It’s dangerous outside, though, let me tell you.  When you walk indoors on a treadmill, there is no fear of a flying beetle landing on you or getting in your hair.  Neither happened, but I’m sure we looked completely sane and normal as we ducked and hid behind each other, and screamed, and flailed our arms around our heads. 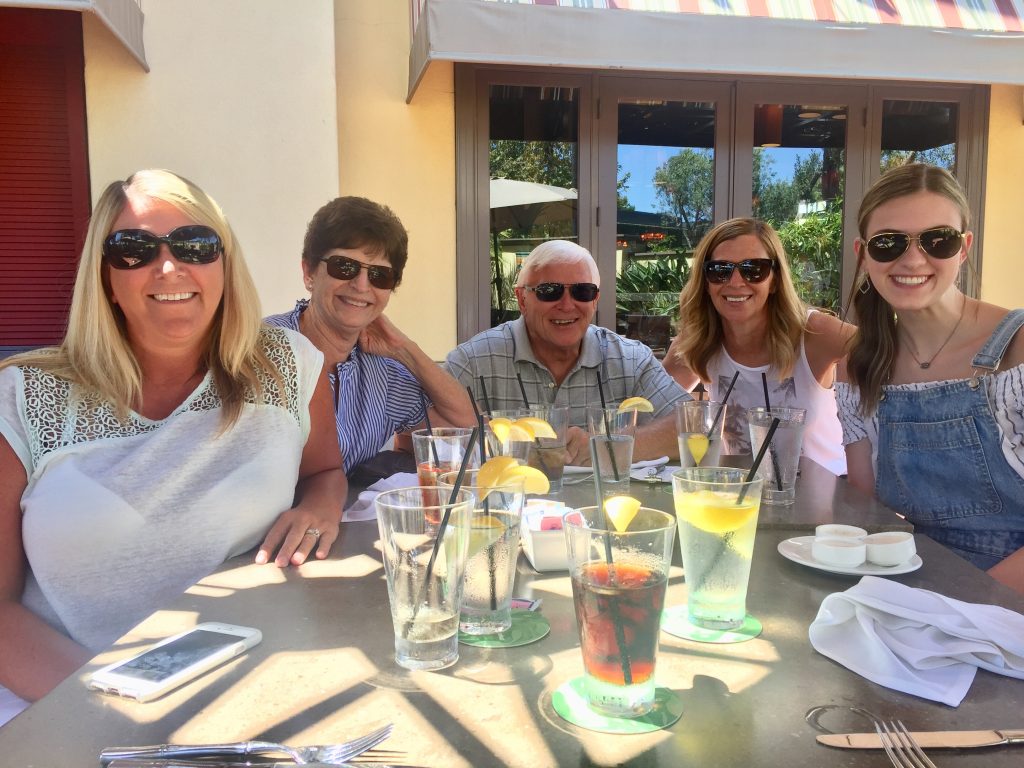 The boys flew home after five days or so, but Kerry and Madison stayed longer.  On this day, we went to Tommy Bahamas (the restaurant) in Newport Beach.  This was after driving around for an hour or so looking for somewhere to eat.  YOU GUYS.  I had LOBSTER GRILLED CHEESE.  I can’t even explain the deliciousness to you.  I mean, LOBSTER MAC AND CHEESE.

Notice my hair????  Madison curled it with a wand.  A curling wand, not a magic wand, otherwise I’d be young in this picture.

I took a little poll on Instagram on whether or not I should try to curl my hair more often in the future, and the answer was YES by a landslide, which should have made me feel like people don’t like my regular straight hair, except that several people messaged me to tell me they like my hair both ways, so I didn’t get too big of a complex.  😉  I have about a week and a half left of summer to practice curling my hair and/or I’ll just sit on the couch, hold my knees, rock back and forth, and cry with anxiety over the fact that I only have a week and a half left of summer.  It’s a toss up over which one would be more fun to do. 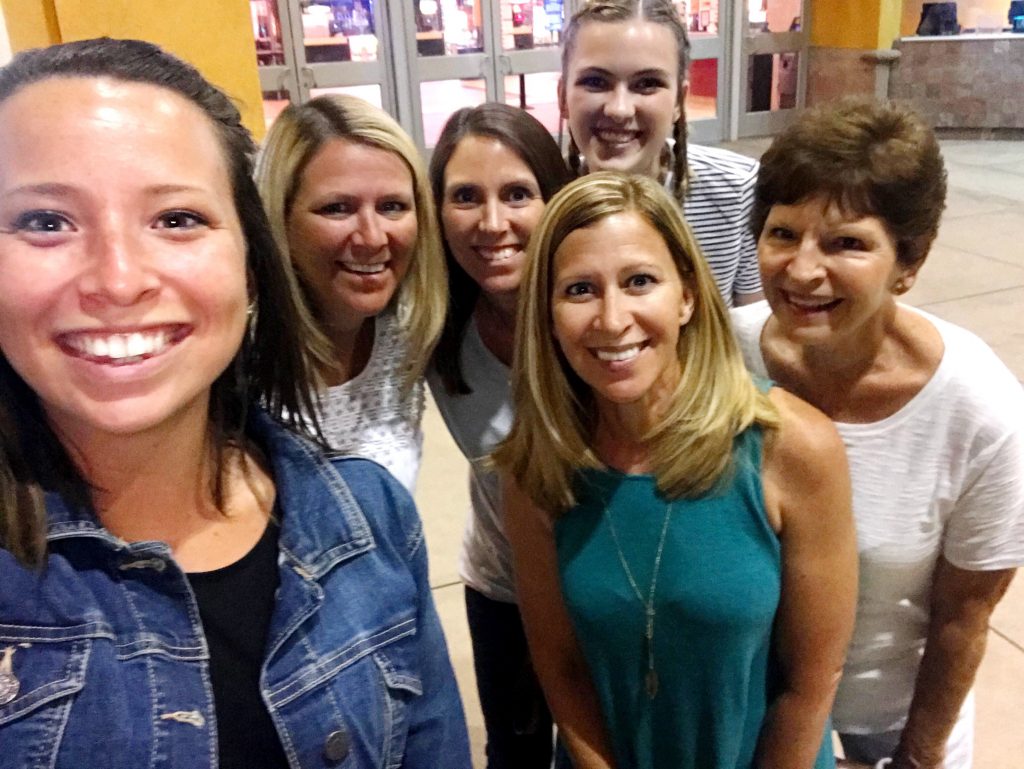 My mom’s birthday is coming up so we went out to dinner with everyone, but then the boys left, and the girls went to see Mama Mia!!  It was a great movie, although, in the beginning, I wasn’t sure if I was going to like it.  It was a little mellow in the beginning, and I was looking for the fun, upbeat, dance in your seat feeling that I get when I watch the first one.  That feeling happened, just not right away.  We all LOVED it!  It was super good.

It was just an amazing time.

I topped it all off with a two day Professional Development training because how else should I end a fun trip with family!?

Like I said, I have a week and a half left of summer.  Eight “school days” to be exact.  Monday through Friday, Monday and Tuesday, and then we report back on Wednesday, August 8.

I can’t even believe this news.

You’re all caught up!

What have you been up to lately?