I can’t have Five for Fraturday today.

And The Bucket happened.

And I have to write this down before I forget all of the details (although I’m pretty sure this will stay ingrained in my memory FOREVER) so no Five for Fraturday.  But I do have plans for a Five for Frunday.  So stay tuned.

Yesterday, right as I was opening the door to take my kids to last recess, our principal came over the intercom and said teachers and staff, we need to lock down immediately.  Please proceed with lock down blah blah blah . . . I can’t really quote her because I felt confused over the fact that she didn’t use the word drill.  My kids were, too.

Did she say drill?  Is this for real?  I’m scared!

Lights off, door locked, blinds closed, not a word to anyone.

I started texting all my teacher friends, asking if anyone knew what was going on and, of course, several did in the way that teachers just find things out and, really, we’re like undercover detectives when you think about it anyway (I know you left your glue stick cap off or I know you took that eraser).  I just happened not to be in the loop.  Apparently, there was a suspicious car and a suspicious man by our playground and the police were on their way.

Eventually, (I’m talking twenty minutes later), our principal got back on the intercom to tell us that it was a Lock Down Code Such and Such (I won’t tell you the code in case some bad guy or creeper dude reads my blog — I mean, I did have a creeper the very first time I periscoped so you never know . . . I am quite popular – 😉 – and not sure if everyone can say that) but the code meant Business as Usual inside our classrooms.

We just couldn’t unlock the doors, open the blinds, etc.  But we could keep teaching and we didn’t have to be under our desks and be silent.

Keep teaching on a Friday afternoon at 2:15 only means one thing in my classroom.

FUN FRIDAY!  (I mean, who wants to teach on a Friday afternoon during a lock down?)

So we started our Fun Friday.

Meanwhile, we missed last recess and hadn’t been outside since our lunchtime which ended at 12:10pm.

Which meant that most of my kids hadn’t been to the bathroom in awhile.  Including me.

When two girls asked if they could go, I said we can’t go outside.  Can you hold it?

And off they went.

And when they came back five to ten minutes later and asked again, I repeated myself.  We can’t go outside.  Can you hold it?

And when the lock down continued for almost an entire hour, and the two girls came back and didn’t ask to go to the bathroom but, instead, did the potty dance and said we have to go!!!! I knew I was going to have to use The Bucket for the first time ever. 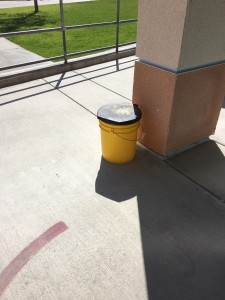 We all have one (except for our kinder teachers who have bathrooms in their rooms) and it is under our sinks.  It is filled with emergency supplies, and it becomes this when you lift the lid. 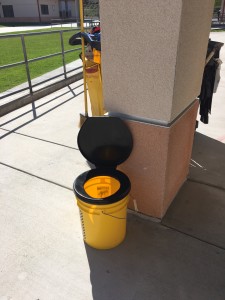 I have a toilet in my classroom.

And these two girls were having an emergency.

Luckily, my adorable aide (not my aide, actually a student’s aide, but I call her mine because we are bonded, and I have to retain her student in order to keep her next year so I’m working on that) . . . my adorable aide was with me so I had backup.

And when I say my aide and I are bonded, we are now closer than ever because of this.

I dumped the emergency supplies out of the bucket.

I have tile in my classroom so we put The Bucket on the tile, and told the rest of the kids to stay on the carpet and to keep playing whatever they were playing for Fun Friday.

As with most classes, some kids had no clue what was going on and continued building with blocks or writing at the writing center, and other kids were fascinated.  What?!  They’re going to go to the bathroom in a bucket?!  WHAT?!  Can I see the bucket?!  This is awesome!!!!

I have a rug in my classroom so my aide and I used that to shield the student for some privacy.  We were in a corner and we just each grabbed one end of the rug and held it up like a door.  A big, wide door.   Oh, and bonus!  When I dumped the emergency supplies into the sink, I found out that there was a brand new roll of toilet paper in there, too.  All wrapped up in pink tissue paper.  It did feel like a present when I unwrapped it.  Because it’s not like I have an abundance of kleenex with all my kids sniffling, coughing, and using one to delicately wipe off their mouth after getting a drink at the water fountain (we had to have a talk about that last one).

Wait.  Is this really happening?  Am I holding up a rug, facing the carpet with my back to a student who is sitting on The Bucket and going potty?!

IN FRONT OF A RUG.

WITH NOT A CARE IN THE WORLD.

I had some Bath and Body spray in my desk and you better believe I was spraying that like no tomorrow.  All seven kids only went potty (number one) but still.  STILL.

One of my boys, who happens to be kind of small, must have gone for two minutes straight.  My aide said are you done yet? and he said, exasperated, I’M STILL GOING! I DIDN’T GO AT LUNCH!

This was not Business as Usual, thank you very much.

I think I ended up with seven kids using The Bucket because it became a phenomenon in the way that when one kid is coughing and you say go get a drink, all of a sudden your entire class comes down with a coughing fit.  Except we weren’t coughing.

We were going in The Bucket.  IN MY CLASSROOM.

As one little girl said, like back in the olden days!

Finally, with about twenty minutes left in the day, the lock down ended.

I put The Bucket outside.

And wondered what to do with it.

Meanwhile, one of my boys had been in the school library because he was exchanging his book when the lock down went into effect.  So he was unable to leave the library which meant he missed a lot of his Fun Friday.  Of course, I felt bad about that and I told him he could go to any center he wanted, no clip necessary.

Well, he was still upset because he only got about ten minutes.  And he teared up and pouted for a bit.  I tried to talk him out of it, but he wasn’t having it.

Eventually, I had to give up.  Because while he was in the library, READING QUIETLY AND LOUNGING AROUND, I was having kids go potty in The Bucket.  So if anyone had the right to cry and pout, it was ME.  Got it, Mister?

I started telling a couple of my friends that we had to use The Bucket and it spread like wildfire.  After dismissal, several teachers wanted to talk about it and wanted to know how I gave the students privacy.

And several others said they just told their kids to HOLD IT.

But I happen to be the kid who had several accidents when I was in first grade.  It’s true.  So my bathroom policy is this . . . YES.  YES, YOU MAY GO.

I also go to the bathroom all the time.  ALL THE TIME.  If you want to know where a particular bathroom is when you’re out and about in a restaurant or a store, or at a park, or in the airport, or a gas station, or at a field trip, or anywhere, really, I know where it is because I’ve used it.  Or I’ve scoped it out.  I’m not picky either.  When I have to go, I go.  I have also never been able to sleep through the night.  EVER.  I hate it, but it’s true.

I know what it feels like to have to use the bathroom and I’m telling you right now, if  that lock down had lasted too much longer, I think I might have been using The Bucket.

PS Our amazing custodian took care of The Bucket and also complimented me for going by the book during a lock down.

« Talk About It Tuesday
Five for Frunday »