Hello you and HELLOOOOOO SATURDAY!

Mostly, I love Friday nights when the whole weekend is in front of me, but Saturdays are a close second!  🙂 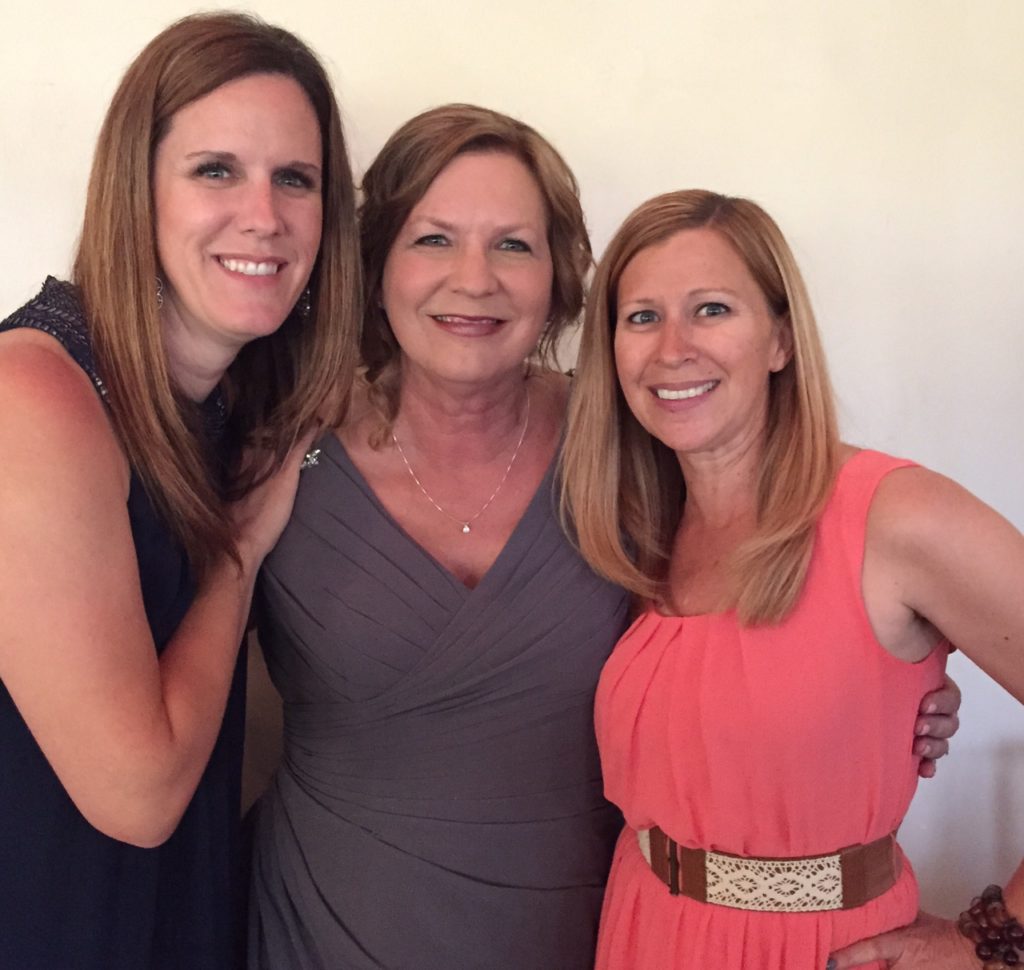 I went to a wedding recently and I hardly knew anyone and I had the BEST time!

So the beautiful lady in the middle is my teaching partner, Laurie, and she was the mother of the groom!  Her son got married!!

Well . . . Laurie said to me I totally get it if Steve doesn’t want to come, maybe you should think about inviting a friend like . . . Meghan or something . . .

Meghan is on the left.

And she is one of my BFFs (she teaches third grade), and I had her twin boys in my class last year, and SHE IS A FUN AND HAPPY PERSON TO BE AROUND.  She is a crack-up.

Steve would have come (of course, he’s always my date, he has to be, he is my husband, it’s his job) but when I told him I might ask Meghan, he was all I’ll stay home and watch the game or a movie or anything else and I totally understood in much the same way that I would say the same thing to him if I had to go to a wedding for someone’s son or daughter that he knew, but I didn’t, and I wanted to stay home and watch a Housewives marathon in my pjs instead.

But he didn’t stay home the entire time BECAUSE HE WAS OUR CHAUFFEUR!  He drove us, dropped us off right at the door, and then picked us up when we called him and said we were ready to come home.  So we both got to have a glass (and a half or so) of wine!  Ha!

Meghan and I knew maybe three people and that included Laurie, her husband, and her daughter and, like I said, we had the BEST time.  Laurie’s family was super welcoming, we had great conversations, we ate DELICIOUS appetizers and food, which included pasta AND mashed potatoes (because the groom wanted potatoes) and we DANCED AND DANCED AND DANCED.

And, let me tell you, I cannot dance.

Call me Elaine on Seinfeld.

But I LOVE to dance.  Steve has given up on me NOT dancing because if I hear a tune I like, I’ll dance in the kitchen or on the porch or in my chair.

When you don’t really know ANYONE, and your BFF is so happy because her son is so happy, and the entire evening is just happy, and your date is fun and hilarious, you can dance like no one is watching.

We were a sight to see! 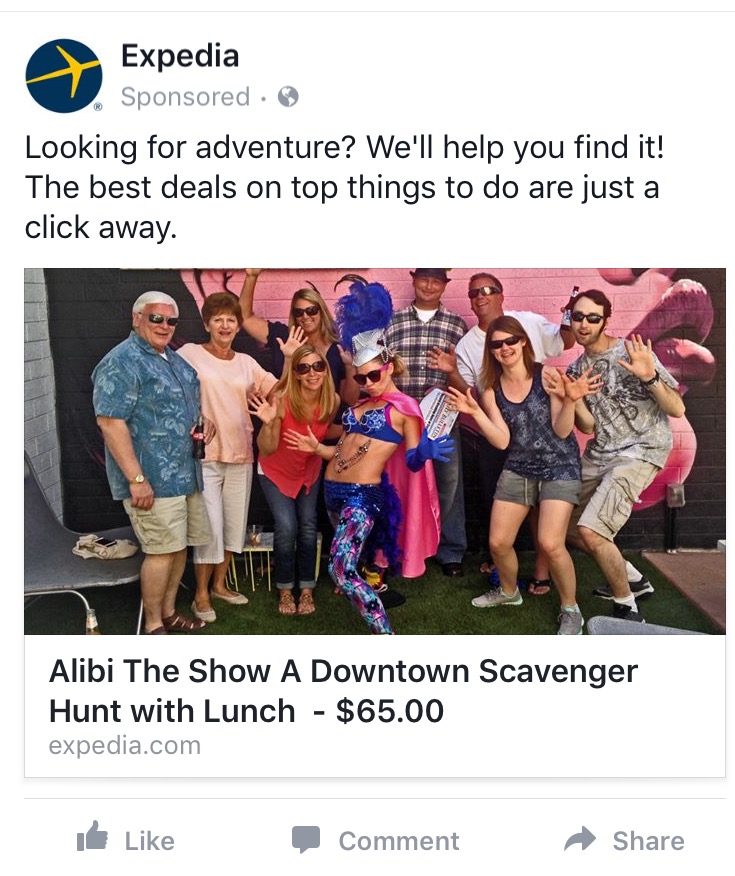 My older sister, Lisa, sent this picture to my mom and me.

She was scrolling through Facebook and saw this picture ad from Expedia and Alibi.

And, people, if you can’t tell, that’s my family.

We were there a couple of years ago (or three years ago, I’m starting to lose track because that’s what happens when you’re over 40 and you start to lose your brain cells) when we went for my brother’s 40th birthday.

And we did that Alibi Downtown Scavenger Hunt because Steve and I had done it a few months prior with his brother and sister in law and thought it was a blast.

So that’s MY family in the picture.  I’m the girl with the rockin bod in the funny hat.

My mom and dad are on the left, Lisa is behind me, my brother, Jason, is wearing the hat (it was for the scavenger hunt and he had to or something, I can’t really remember why), Lisa’s fiancé is in the white t-shirt, and then the other two people are strangers who just happened to be on the tour with us.

The showgirl was a hoot and a holler.  I have no idea where Steve is, but he was there.  He didn’t want to do the tour again since we had just done it so he kind of did parts of it, and kind of didn’t, and I don’t know, I can’t remember?!

But however you look at it, Expedia and Alibi are using our picture and I am here to tell you that I have NOT been compensated.

Nor do I remember giving permission.

Although I’m sure I signed something and I’m sure I was meant to read the fine print.

But WHO READS THE FINE PRINT?

My latest hobby:  modeling for Expedia and Vegas ads.

And now we all know that vertically challenged people CAN model. 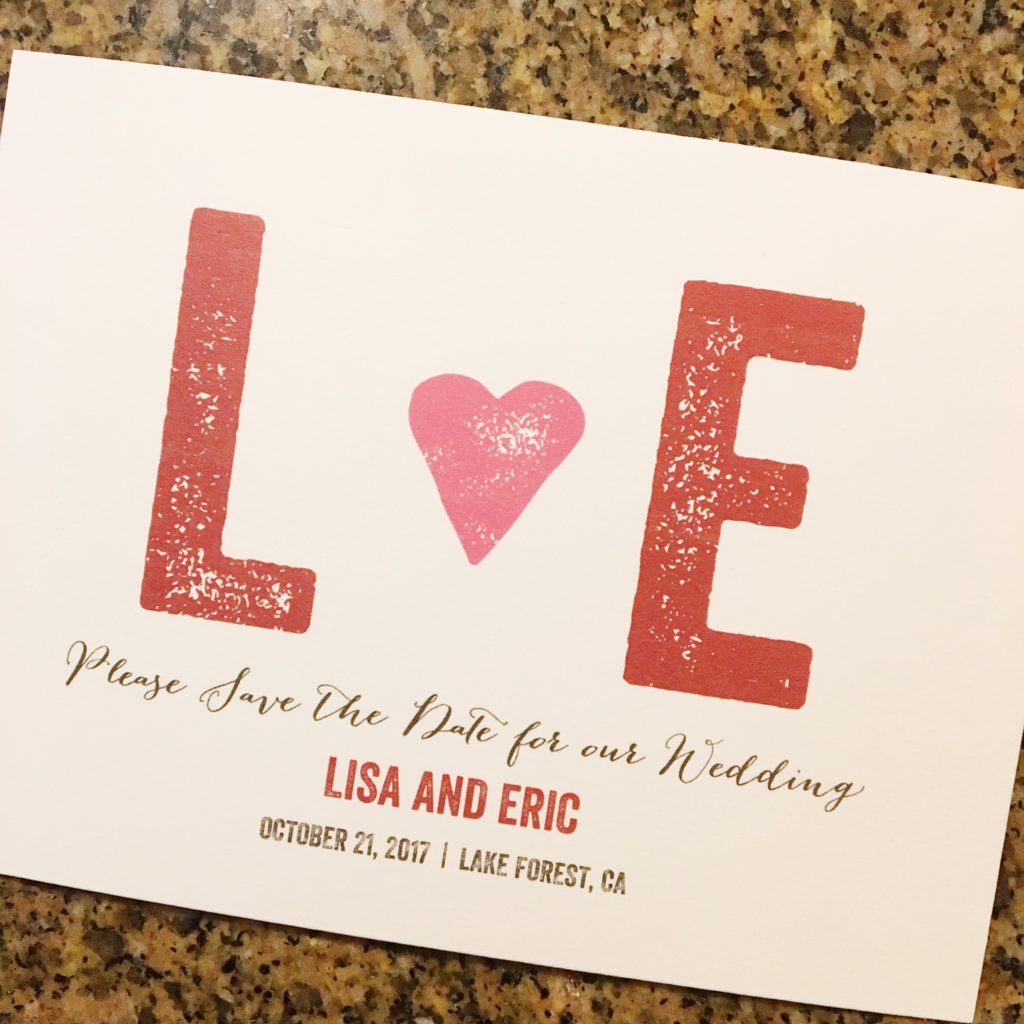 Speaking of fiancés, my sister, Lisa, is GETTING MARRIED!

I love love love their Save the Date card!  I just got it this week and it took me a whole day to realize that the L in Lisa and the E in Eric surrounding the heart sort of kind of spells out LOVE!!!!  I have no idea if that’s the intent, but that’s what I see.

We are all super happy for them.  Eric is really really really good to Lisa and so we all love him.  She deserves that!  They are both happy people, have a ton in common, just want to have fun and live life, and so it should be a super fun wedding, as well.  I’d love to tell you Lisa’s whole life story, but it’s not mine to tell, so I won’t.  But I’d love to.  Really.  😉

Steve will come to that wedding with me AND WE WILL KNOW ALMOST ALL OF THE PEOPLE!  Obviously!

But in a how can this world get any smaller type of way, the officiant happens to be the brother in law of one of my past parents and I can’t even explain how we came to that conclusion, but there it is.

So I’ll even kind of know that guy! 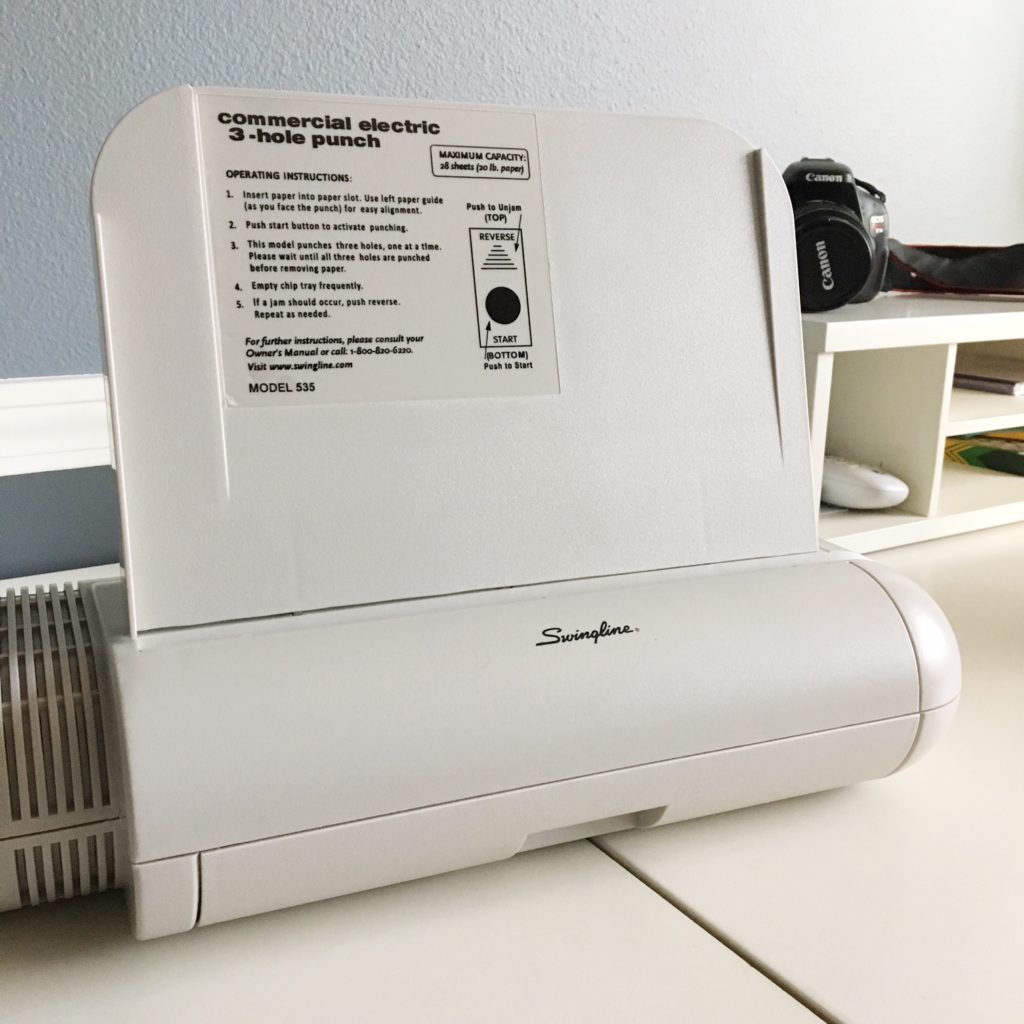 I made a big purchase this week.

But there is only one.

And at the end of the year, it is in HIGH DEMAND.  Teachers are putting together memory books, and scrapbooks, and who knows what else, but the school hole puncher is never in the workroom.

So you have to write a note on the lounge whiteboard that says something like Looking for the hole puncher!  Do you have it?  Please let Oldham know!  Room 29!  Thanks!

If you’re like me, then you STAY IN THE WORKROOM TO HOLE PUNCH YOUR PAGES.  Just in case anyone is looking for the hole puncher, then you’re right where it is supposed to be.

Or, if you take it to your room, you leave a note on the lounge whiteboard that says Oldham has the hole puncher, Room 29!

(In the interest of being completely open and honest, I will say that one time, and one time only, I took it home on a Friday night and used it over the weekend and then snuck it in super early on Monday morning and no one was the wiser.)

This year, now, as a matter of fact, the hole punch machine HAS GONE MISSING.

And no one has written a note on the whiteboard telling us where it is.

My teammate, Heather, wrote a note on the whiteboard saying something like I need the hole puncher, please return it as soon as possible, thank you! with a smiley face and a sad face because HELLO?  Where is it?

And then a MASS EMAIL was sent out asking  whoever has it to please return it IMMEDIATELY to which several people REPLIED ALL (kill me now) that they DIDN’T have it.

And that was a WHOLE WEEK AGO.

And that hole punch machine HAS NOT BEEN RETURNED.

Um, who does that?

I know the saying beg, borrow, and steal, but IT IS JUST A SAYING.

YOU’RE NOT ACTUALLY SUPPOSED TO STEAL.

If my school was a sitcom (or any school, for that matter) or even a reality TV series (which I think would be fabulous), the HOLE PUNCH MACHINE GONE MISSING would make an excellent episode.

Anyways, I bought my own.

And so did Heather.

So now we have two on our grade level, but I’m not sure I can actually lend mine out because I had no idea I was working with Winona Ryders at my school. 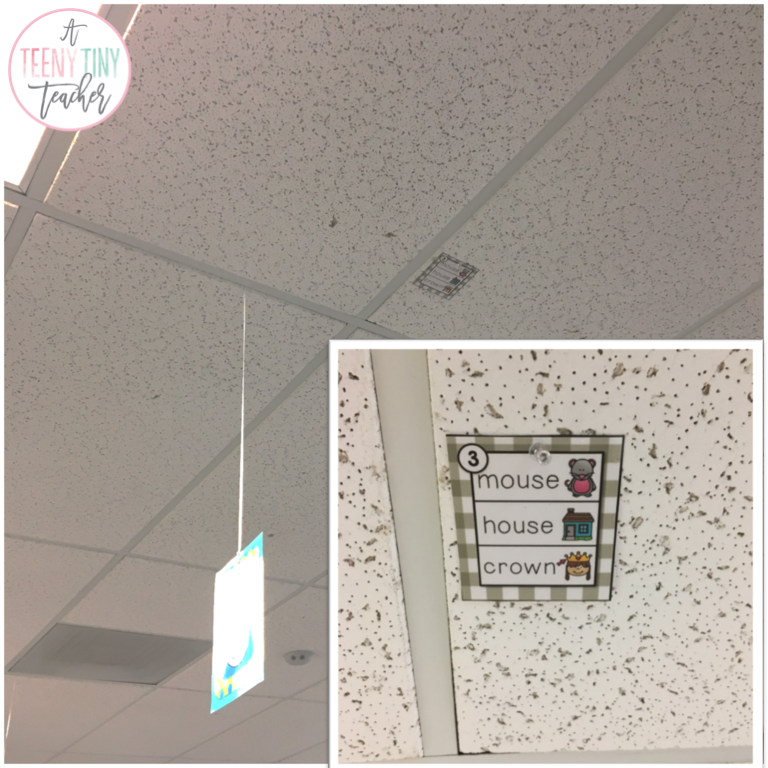 I crack myself up!!!

I started running out of places to hide my Write the Room cards for centers and I had a brilliant idea.

I hid one on the ceiling.

I know I don’t have to necessarily hide the cards, per se, and that the kids just enjoy getting up and moving around the room, but they DO love when I am sneaky.

Or at least I do, and that’s all that matters.

Are you sure you looked everywhere?

High and low and up and down?

Far and wide and here and there and UP UP UP?

OH, DID WE LAUGH.

Or at least I did, that’s for sure!

That card is from my Rhyming Write the Room pack, FYI.

Alright, I’m off to enjoy a rainy day.

It’s not raining yet, but it’s threatening to and I want it to, so let’s all hope it does!