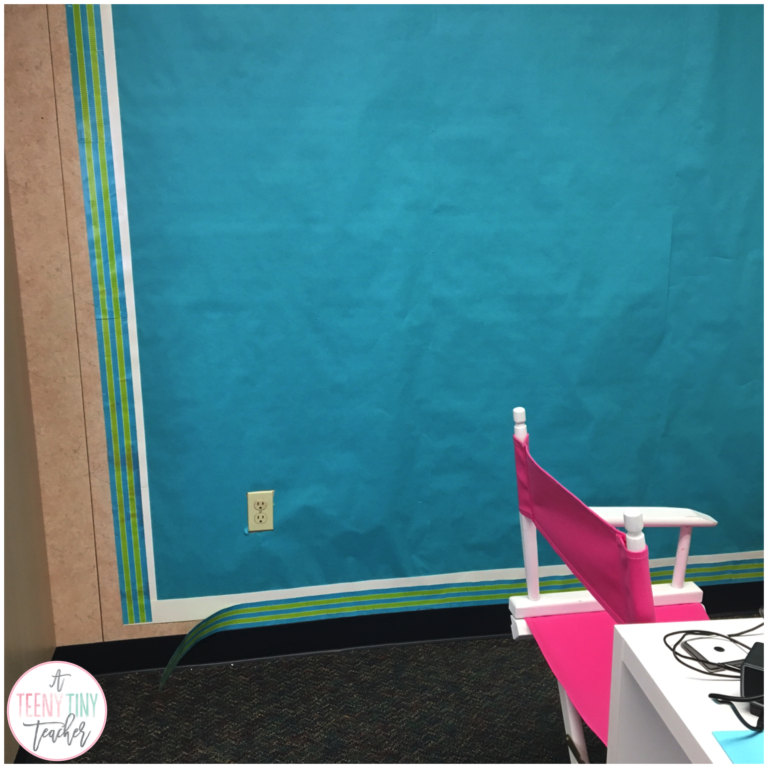 THIS RIGHT HERE WAS MY ENTIRE WEEK AND I AM NOT JOKING.

I thought about adding 4 other random pictures but, honestly, THIS BULLETIN BOARD WAS MY ENTIRE WEEK.

And part of last Friday, too.

So rather than put in five different pictures, I’m just including this one picture and making 5 points about it.  Or six or seven or I don’t care because YOU GUYS, THIS BULLETIN BOARD ABOUT KILLED ME.

You know how when I first started blogging (in 2011!!!!), I only had an overhead and I called it TODD (Terribly Old Decrepit Dinosaur) and how I was so excited to get a Ladybug Document Camera?

Because I do, and I am here to tell you that after this week, I kind of miss TODD.  With TODD, all I had to do was find an outlet and plug him in.  The worst thing that happened was the lightbulb would burn out.  And then you just replaced it.  Computers, wires, bluetooth, WI/FI, blah blah blah had nothing to do with it.  If you had told me that I would ever miss TODD, I would have told you to go wipe off all of the transparencies sitting there in a pile waiting to be wiped off because I sure as heck never wanted to do it.

But I miss TODD.

A couple of years ago, we were told we were going to get ceiling mounted projectors to go with our Ladybugs and some sort of Smart Board/Mimeo Board type of thing.

And then we were told we would get it last year.

And then we were told we would get it around Christmas time.

And then they finally showed up and they’ve been working in our classrooms (after school, obviously) AND OPEN HOUSE IS THIS COMING THURSDAY.

And do you want to know why that is important?

I’ll tell you why.

The very first room that they started in, the very first room that got all set up, was my friend, Maria’s, room.  She teaches second grade.  Hi, Maria!  And she had left for the day BECAUSE SHE HAS A LIFE, and they went about their business without discussing anything with her (except that she said something like, please don’t put it here, I have bookshelves here) and they gently tore her bulletin board paper back and folded it over and stuck this long plastic tube sort of pole type thing down the wall from ceiling to floor WHERE HER BULLETIN BOARD WAS.

Open House is coming and you can’t just PEEL BACK A BULLETIN BOARD!!!!

So, naturally, my team and I FREAKED OUT.

We went to our principal and she talked to the secretary and she said the district wants it all to be uniform and that they made an exception in Maria’s case and that all of these long darn pole plastic EYE SORES (which I shall call it from here on out for the sake of my typing fingers) have to be in the same place and how they’re all going to be in the corner by the whiteboard WHICH JUST SO HAPPENS TO BE MY FOCUS WALL.

My carpet area bulletin board where I do not display student work BUT IMPORTANT TEACHING STUFF LIKE PHONICS AND WHATEVER ELSE YOU DEEM IMPORTANT.  Use your imagination.

And I was like . . . there is no way in the world that these guys are gently tearing one of my bulletin boards, oh heck no, I’m going to beat them to it.  Because I am smart, don’t ya know.  (not really as you’ll see if you keep reading)

So last Friday, after school, I TORE DOWN MY FOCUS WALL.  Like, everything.  Even the borders.  THE WHOLE DARN THING.

And I scooted the board over to make room for the EYESORE and I hung up new paper and I left, thinking I’d add the borders on Monday and do a little at a time throughout the week and make it nice and manageable.

So guess what I did?

I tore it all down on Monday and re-hung the paper going all the way to the ceiling.  Every time I hung the paper, I carefully cut out the little hole for the outlet, too, by the way.  You know, fire hazards and all that, although supposedly it is a fire hazard to have our paper go to the ceiling, but we all do it, and the fire department hates it, and we get dinged, and then nothing ever happens, and I don’t know???

On Tuesday, I put the borders back up which you can see in the picture.  And I staple double borders because my friend, Heather, makes me.  😉  So it is A BIG FAT PAIN IN THE BOOT-Y.  Not to mention, I am short.  And even standing on a desk is not enough.  And it hurts my neck to keep looking up up up and stretching and I have a sore neck, I tell you.

Another second grade teacher, Stephanie, walked into her room, and they put the EYESORE on top of her bulletin board.  No tearing, removing, folding of her board.  Nope.  Just plop.  On top.  BUT.  She had a second EYESORE in the back corner where there really isn’t a bulletin board.  She has TWO EYESORES.

And I wanted to cry.  I fake cried to my team.  Because my EYESORE could have just gone on top of my existing board.  The one I had before last Friday.  All of my hard work was for naught.

And the fact that my new board is not all the way over to the corner (to prepare for the EYESORE) WAS REALLY BOTHERING ME.  It was off.  It just didn’t look right or feel right.

So I said LOOK.  THIS IS RIDICULOUS.  I’M GOING TO TRACK THAT TECH GUY DOWN AND WE ARE GOING TO HAVE A TALK.

All big-like and stuff.  I might have puffed out my chest, too.

After school on Wednesday, I went into every room looking for this guy.  And I went into my friend, Meghan’s room, and guess who I found?

So I said YOU HAVE GOT TO BE KIDDING ME.  WHERE IS THIS GOOD FOR NOTHING TECH GUY?  THIS IS STUPIDITY IS WHAT IT IS.  And I puffed out my chest a little more.

She helped me find him.  I found him.  His name is Saul.  He was working away and he had ear buds in and he was talking on the phone and I interrupted him.

And I said can you put my EYESORE on top of my bulletin board like you did for Stephanie? all sweet-like.  Because I am a big talker but not when it actually comes down to it.  DARN IT.

And he said we made an exception because her bulletin board was so elaborate and ready for Open House.

Okay, I said.  And I walked away and went back to Meghan’s room and we chatted for awhile.

BUT THEN I WENT BACK.

And he was on the phone again.

And I said can I have my EYESORE in the back corner where Meghan’s is?

And he said no because you want your ladybug in the middle.  And it has to do with input and output.  So we’ll put one next to your bulletin board and one in the corner.  The district really wants it uniform.

And I said okay.  And I walked away.  AND I WAS DYING.  TWO EYESORES?!

And then I talked to who knows who and they all said HE NEVER ASKED WHERE I WANTED MY LADYBUG.

SO I WENT BACK.

FOR A THIRD TIME.

AND HE WAS ON THE PHONE AGAIN.  Just working away.

AND I INTERRUPTED HIM AGAIN.

I said If you worked in a restaurant, you’d spit in my food, but I have to ask you this!

And he laughed because that’s how I try to diffuse situations when I know I’m in the wrong and I am embarrassed and I want something but I’m too afraid to really fight for it.

And he said it seems like you really don’t want to have it on or by or near your bulletin board and that you have concerns about this.

How are you just now getting this?

I said yes, exactly!  Yes!  If you really want it uniform, I am here to tell you that my whole team wants ONE EYESORE ONLY in the BACK CORNER and we will all be uniform.  Really.

And he said okay, I’ll come visit your room tomorrow and we’ll take a look.

I left, but he said he knew I’d be back after dinner and I said no, I really won’t, I promise, because I’ll be in my pajamas and have my glasses on so that’s a clear indication I’m not leaving the house and he was all . . . okkkkaaaaaaaaay.

Here’s what I did on Thursday.  I took down half of the board that I had just put up.  You know.  I like to do things three or four times JUST TO BE ON THE SAFE SIDE.  I like to live dangerously close to the line of LOSING MY MIND.  I had to start over so I could move the paper to the corner so I could feel better and sleep at night.  But when I moved that piece over, I had a BIG FAT HOLE WHERE THE OUTLET WAS.

COME ON!  COME ON, I SAID!  And maybe WAAAAHHHHHHH.  But no one was in my room so no one was sympathizing with me so I just shrugged my shoulders and carried on.

Steve later said you could have just patched up the hole in the paper where you cut the rectangle for the outlet and I said DO YOU NOT KNOW ME BUT AT ALL, YOUR WIFE OF ALMOST 20 YEARS?  THERE’S NO PATCHING IT!  ARE YOU CRAZY?!

I ran out of border.  And one of the pieces had pink stain all over it from a celery/stem/roots/red food coloring science experiment gone wrong.  So my teammate, Laurie, let me take two pieces from one of her boards that she is re-doing (craziness runs on our grade level) and so I was finally able to finish it.  No pink stain.  No holes.

My board is up.  It’s to the ceiling.  It’s to the corner.  Now I just have to put all the stuff BACK ON IT.  With a level, of course, to make sure it is all straight.  And that’s not crazy, that’s smart.  😉

Saul came to my room yesterday after school to begin working on my stuff.  And we talked.  And my team is going to be uniform.

We will all have ONE EYESORE in the back corner.  And that is all.

I was working on my bulletin board (hanging up some new ABC cards to go across the brand new spanking floor to ceiling, corner to corner, beautiful new board) while Saul was working and we are now BFFs.  His wife teaches 4th grade at a charter school, he has a five year old son and a one year old daughter, his parents have been in the U.S. for over 40 years, but are from Guadalajara, and when he asked me how long I’d been teaching and I said 20 years, he asked if I started teaching when I was ten.

Here I thought we were just BFFs, but I’m leaning towards the fact that Saul is secretly in love with me and that is why I only got one EYESORE in the back corner.

And that was my week.

I taught in between, of course, but it mostly consisted of me losing my mind over a bulletin board that I apparently never had to re-do in the first place because the EYESORE isn’t even going there.

And, if you can’t laugh at that, well, then, I’ll get you a TODD for Christmas.