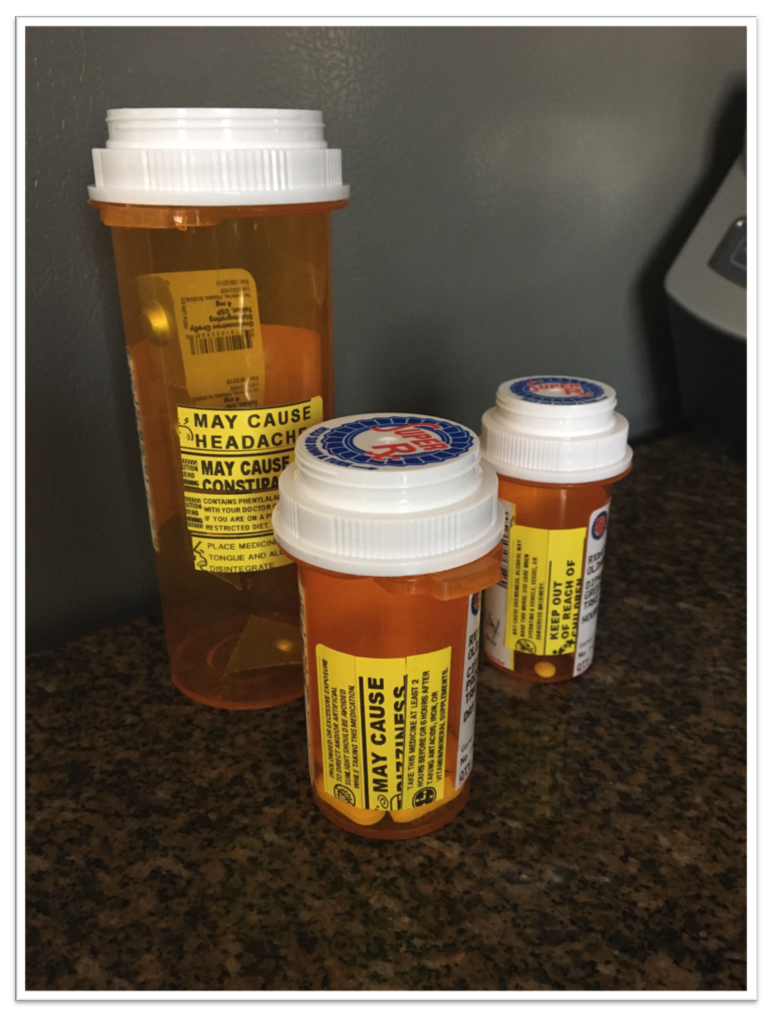 Okay, so you’ve seen this picture before.

As in JUST A COUPLE OF WEEKS AGO.

And I’m putting it back on here because . . . in an effort to visit the doctor AS MUCH AS HUMANLY POSSIBLE THIS SUMMER, my Mexico tummy troubles CAME BACK.

I was okay for about five days and then slowly but surely, my bathroom and I renewed our relationship, and we were closer than ever.  THIS.CLOSE.

I cried on the inside.

I got my ear unclogged on a Wednesday and seriously wanted to say oh, thank you so much for taking care of my ear, but we aren’t finished here, can we move a little south now, I have an issue . . . but I didn’t.

Because hello?  I just had ear wax removed that must have been in there FOR DECADES and that was only a week after my first tummy troubles began.

I made an appointment with my actual doctor instead of going to Urgent Care because I didn’t want them to think that I was a hypochondriac or drug addict or attention seeking person who has nothing better to do with her time.

I visited my doctor late last Friday and she was very sympathetic and that’s exactly what I wanted.  I let her know that I had already taken one round of antibiotics but I didn’t tell her about the ear clog.

Well, she prescribed me a stronger (as in the maximum-milligram dosage) antibiotic and I am taking it for a longer duration.

If, after three days, I was still struggling, I was going to have to come back and give them something that I didn’t want to give IF YOU KNOW WHAT I MEAN.

Thankfully, I started feeling better and, as of today, I feel 100%.

Praying this KICKS IT ONCE AND FOR ALL. 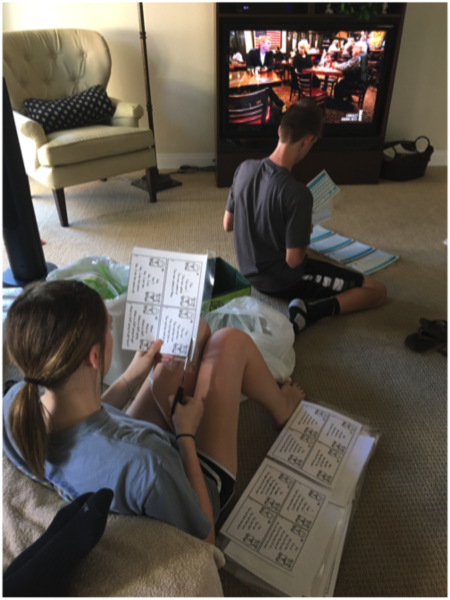 Kerry and her kids arrived on Monday!!

I put the oldest two to work right away cutting out laminate.

They work for Starbucks or fast food or cold hard cash AND I AM NOT ASHAMED to bribe.

I had printed out about a billion things over the course of my summer, taken it to our Instructional Resource Center, and picked it all up a couple of days before they arrived.

Lamination at our IRC is only 10 cents a foot.  THAT IS CALLED CHEAP.  CHEAP CHEAP CHEAP.  You can stay and do it all yourself, or do what I do and just drop it off.

I feel like I am appearing lazy here, but I would like to reiterate that I had to print all the stuff out.

When I picked up my laminate, I owed $21 and some change.

That is a TON OF LAMINATE.

I’m not finished either.

I’ve got a second drop off.

I still don’t think they understand what I’m talking about. 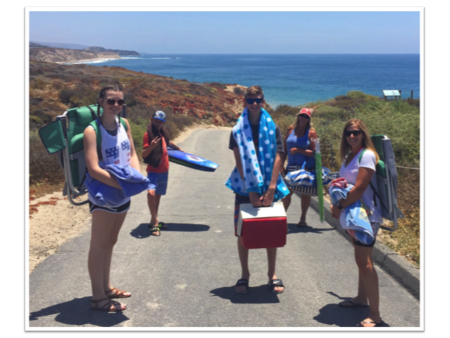 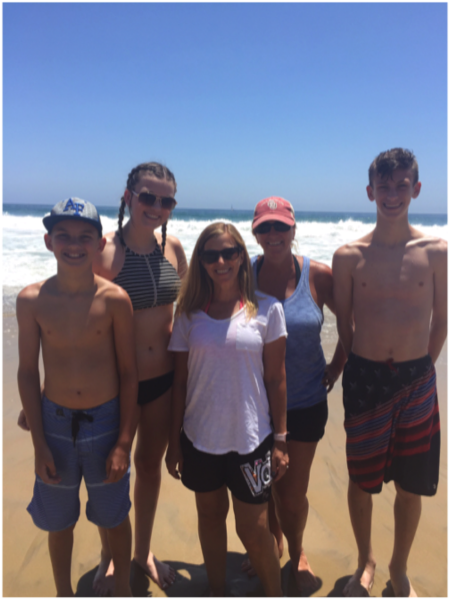 Caden, Madison, me, Lisa, Collin (Kerry was taking the picture)

We went to the beach one day this week.  It was BEAUTIFUL and hot and a super long walk!

I almost never go to the beach unless I’m traveling.  And even then, I prefer the pool.

We had a nice time, though!

Caden, the youngest, is finally taller than me so I’m officially the shortest one in the family. 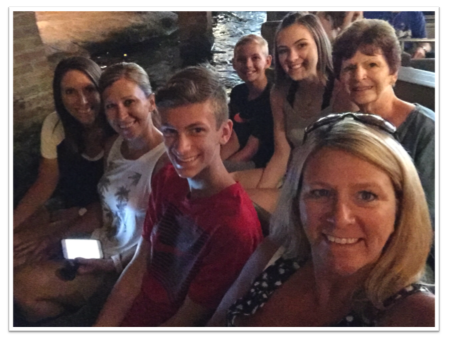 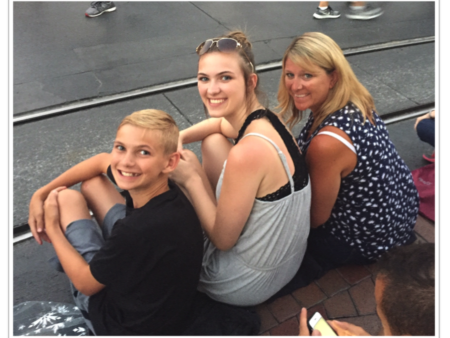 Then we went to DISNEYLAND (on Wednesday)!

We hadn’t been in a couple of years.  We got there right before they opened and it wasn’t crowded AT ALL!  It was INCREDIBLE!  It was cool, cloudy, breezy, and WIDE OPEN.  We were in shock!  We rode all the “good” rides right away — Indiana Jones, Thunder Mountain, Matterhorn, Space Mountain, Pirates, Haunted Mansion . . . all before 11am.  That’s basically unheard of.

I mean waiting in line for 5 minutes to ride Indiana Jones does not exist.

And the food lines were super short, as well (super important when you have your heart set on a Breakfast Churro), and we were able to find tables right away.

Not only that, we were able to find tables IN THE SHADE.

It warmed up a bit in the afternoon and got more crowded, but seriously, it was not bad at all!  I swear, we LUCKED OUT.  Except once, when we all got our churros, and then my mom went up to get hers, and they had just sold the last one.  This exact same thing happened to my brother when we went two years ago, and you wouldn’t think it’s a big deal because you only have to wait six minutes for the new batch to cook, but I guess if you’re my brother or my mom, it IS a big deal because everyone else in your family is eating their churro with not a care in the world and a half-hearted do you want a bite of mine?

The Electrical Parade is back and it was AWESOME and I can’t even describe the fireworks.

Amazing and unbelievable and incredible just don’t do the fireworks show justice.

It was a fantastic day!

I don’t have a picture for this one.

For the first time ever, my nephews flew back to Texas ALL ALONE.  Kerry and my niece are staying with me for one more week.  The boys are happy to visit, but the older they get, the more sense it makes for them to stay only a week.  Ha!  Usually we arrange for my brother in law to come for a bit and then take them home, but not this time.  We took them to the airport this morning, and Kerry stayed with them until they boarded (and then TSA told her she had to stay until the plane took off) and as of a few minutes ago, they are already safe and sound with my brother in law.  Talk about perfect!

In the meantime, Steve is smoking some ribs on the smoker and my parents are coming over later for dinner.

I love summer and I love family time!