Its day eight of my nine day vacation.

HOW IN THE WORLD DID THAT HAPPEN?

It has been absolutely amazing and I am definitely 100% rested, but giving up all the perks of staying at home is going to be hard come Monday.  But I know once I get there and see my kiddos, it will be ALL GOOD.  🙂 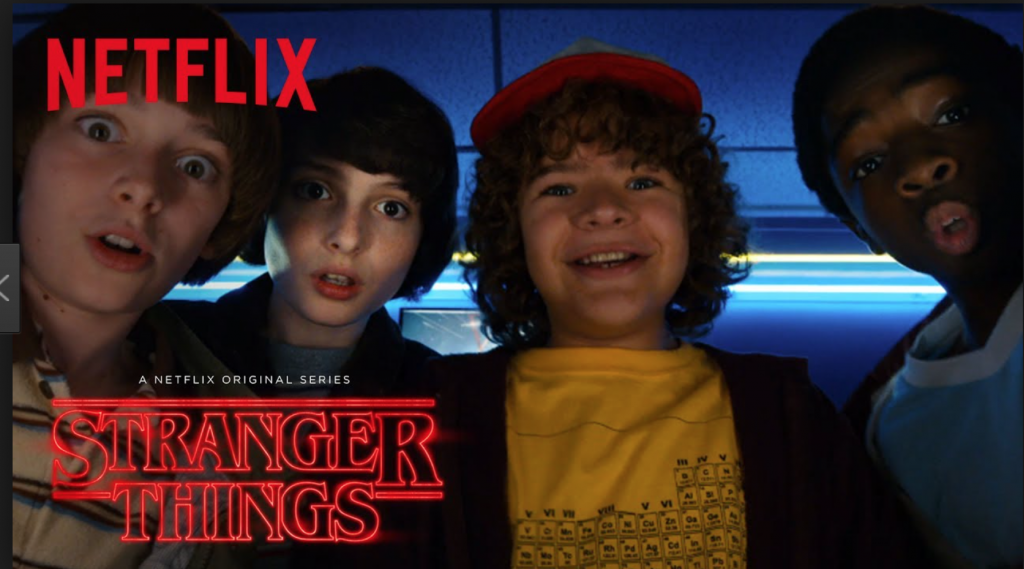 Last weekend, I did not leave the house.  AT ALL.  Not for two whole days.  Steve ran all the errands and kept me supplied with food and whatever else I needed.  I did go out back to play with Murphie multiple times a day, but I did not see any people.  Just Steve.

We binge watched Stranger Things.  Both seasons.  All 19 episodes or whatever.

It’s okay, though, because we worked out both days (he went to the gym with actual people and I stayed home and used our treadmill) so all of the couch potato-ing that we did was really okay.

Have you watched this series?

I was into it in the first ten minutes.

I think it’s because it takes place in the 80s and these kids are in middle school, and I was a middle schooler in the 80s.  I lived in Oklahoma and I have fond memories of that time.  We rode our bikes everywhere WITHOUT HELMETS, we said goodbye to our mom in the morning and she had no way of getting ahold of us until we ventured back (although my mom would stand outside and blow a whistle and we almost always heard it from wherever we were and came back that way!  Ha!), and the phones were ATTACHED to the wall.  And you would get a BUSY signal.

Of course, nothing strange ever really happened and I never worried about the Upside Down, but still.

I became a bit obsessed with this show last weekend.

The boys are nerdy and awkward and I’d have to say I was, too, at that age.  But the boys have each other, and I had a really great group of friends, too, so there you go. 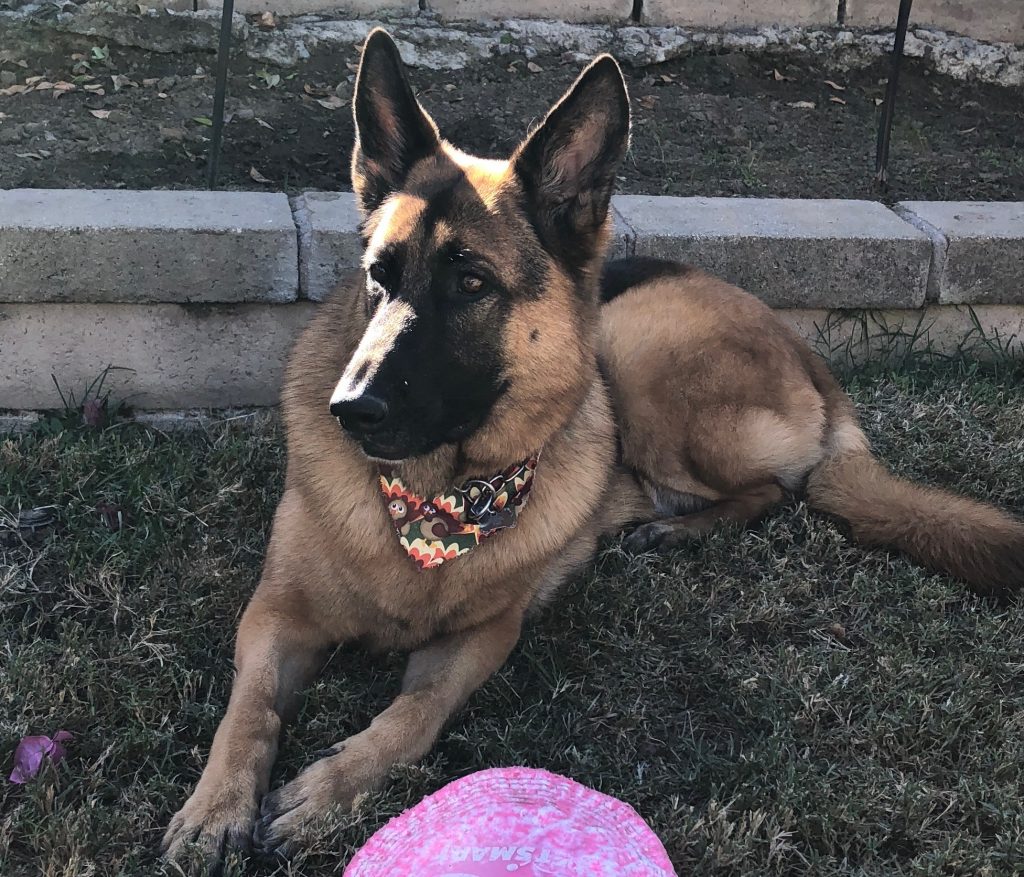 Awwww!!  Murphie got a “professional” bath this week and they put a Turkey bandana on her for the holiday.  Look how sweet she looks!!

She is so so so soft now!  It’s amazing what clean hair can do for someone, whether you’re a human or a dog.  I *finally* washed my hair, too, and it’s incredible how soft it is.

Thanksgiving was at Steve’s aunt’s house this year, and since she and his Uncle Bob are the ones who always babysit Murphie when we travel, Murphie was welcome, too.  She is obsessed with their frisbees and pretty much chews them into the flattest pancakes ever. 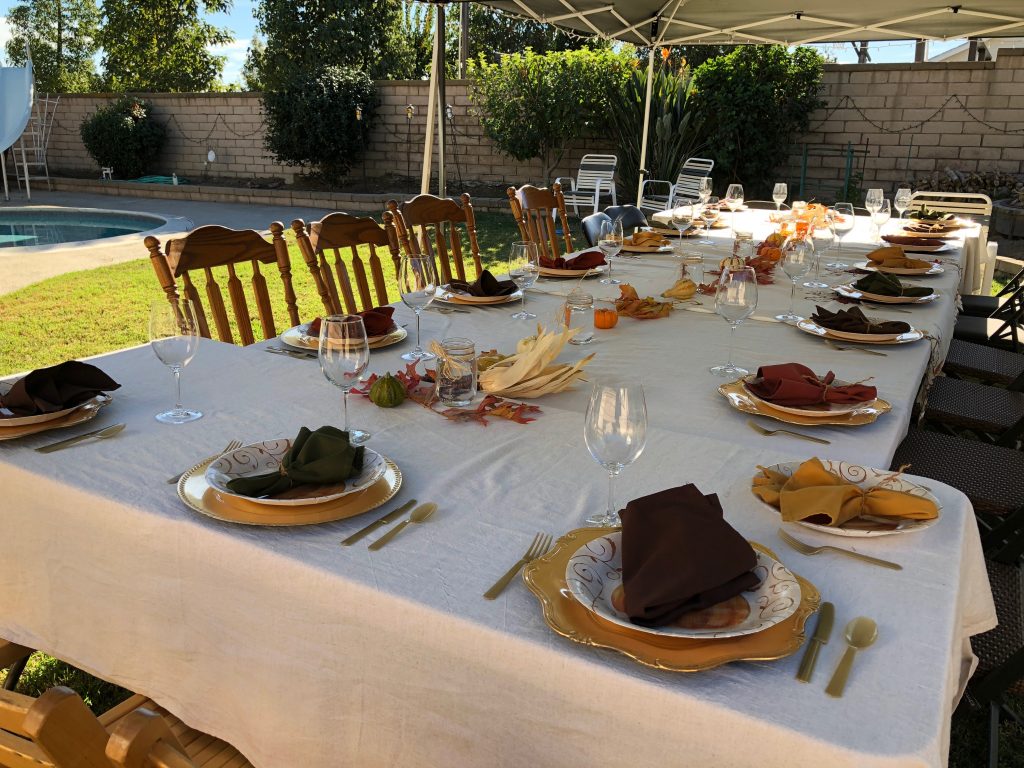 Steve “smoked” a turkey, pork shoulder, brisket, and chicken.  We got to his aunt’s house at 6:30 IN THE MORNING.

He needed to get the smoker going and all the meat on so that we could eat at 4:00.  So while Steve spent the majority of his day cooking and injecting and brining and whatever-else-ing, and looking pretty much like the hired help or the Taco Guy, I helped his aunt with anything she needed and snuck off to see my parents for a bit.

My mom gave me a tin of her FAMOUS AND DELICIOUS fudge (I get one every year) so I promptly texted Steve and then it was all MISSION: HIDE THE FUDGE FROM EVERYONE, WE DON’T WANT TO SHARE.

Steve met me out front when I pulled back up to his aunt’s and he was holding a bag for hiding the tin.

We’re serious about this fudge, if you can’t tell.

I want you to understand the deliciousness that is this fudge.  It is MELT IN YOUR MOUTH chocolate fudge.  It is my favorite.  And it screams CHRISTMAS IS COMING!

We put the tin in the bag and then put that in the bottom of an ice chest, and THEN we set a reminder so that we wouldn’t FORGET to take it home.  This is what happens when it’s 95 degrees outside and you can’t leave it in the car, and you absolutely 100% do not want anyone to know that you have fudge.

There were 20 of us at his aunt’s and sharing the fudge would have meant Steve and I only would have had about 10 pieces left over or something like that.  I don’t know.  But we know it wouldn’t have been ENOUGH.

There were twinkle lights everywhere once it got dark and it was just fun and cozy in their backyard.  We got home around 8:00 and went to bed at 8:30 AND I AM NOT JOKING.

We were full and tired and there you go. 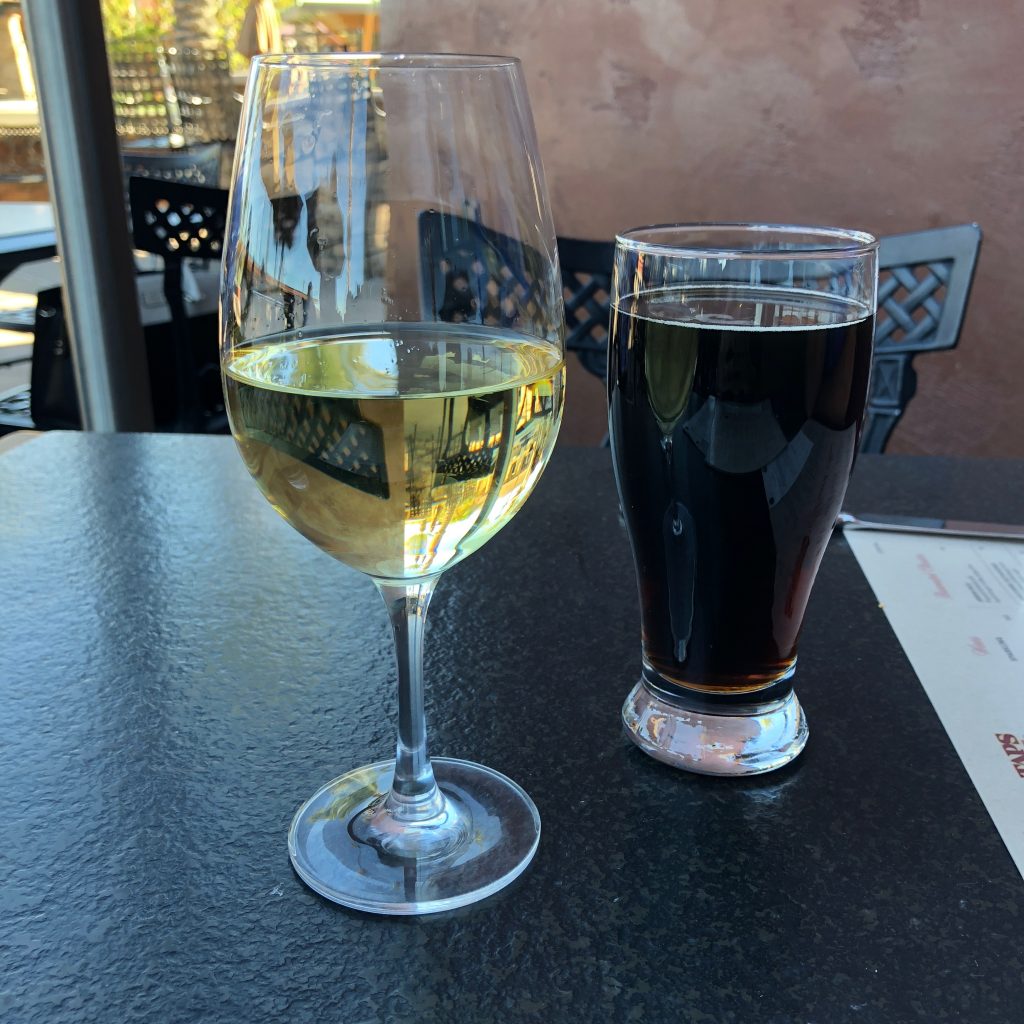 We did absolutely nothing on Friday.  I’m telling you — not a darn thing.  We almost felt guilty, but then we didn’t because HELLO?  We were at his aunt’s house at 6:30 IN THE MORNING the day before.  Enough said.  🙂

Today we both exercised AGAIN!  I know!  I mean, you might as well call me an athlete.

Someone call me an athlete.

Then we ventured out and had lunch at Taps where we ate entirely way too much food.  You know, since we had burned all of those calories.  😉

It is beautiful outside today so we sat on the patio and it was LOVELY.

I am loving my Thanksgiving break.  Did I say that already?

Amongst all of my binge watching, eating, sleeping, and exercising, I got some work done.

This week, we will be working on Digraphs so I created a Just Add Watercolor pack for practice and review.  This one has a twist, though. 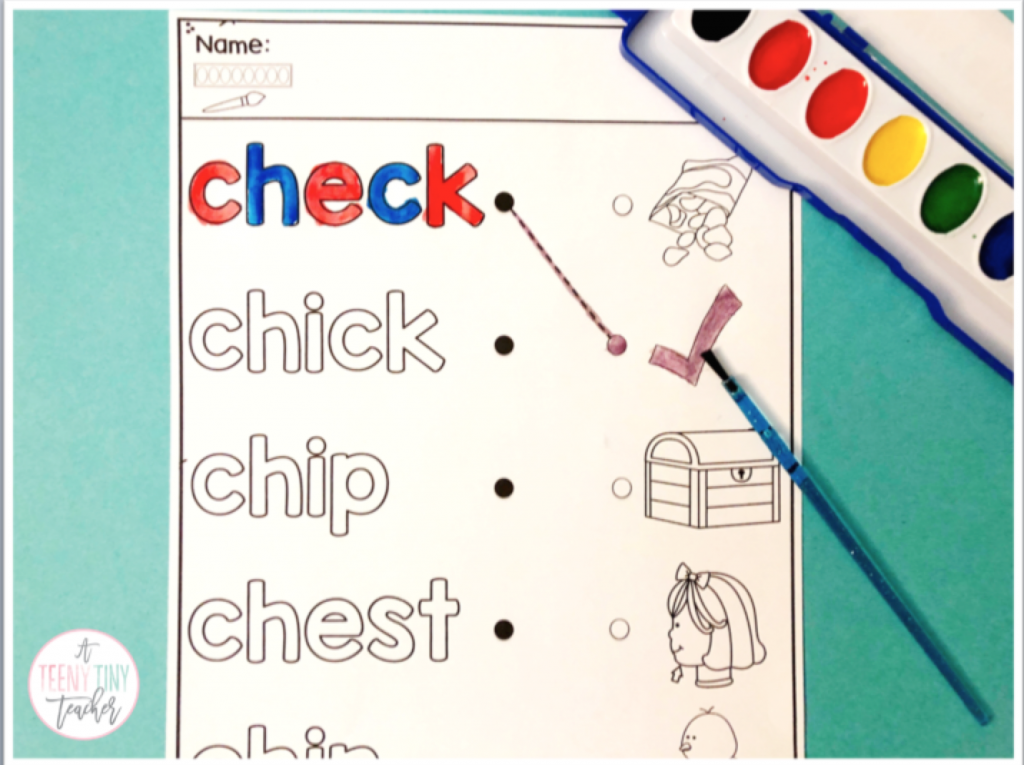 My kids will paint the words and then paint a line to the matching picture.  This acts as a quick check (or an exit ticket) which is WAY WAY WAY easier for me than trying to meet with my kids and have them read the words to me.  That’s what I was trying to do and, even though I only have four kids in this particular center, it was almost impossible to meet with all four.  I KNOW!  But it’s true.  I often found myself just saying you did a great job, go read those words to a friend because I had OTHER IMPORTANT THINGS TO DO like tell a kid TO WASH THEIR HANDS, SURELY THEY FOUND ALL THE TREASURE THEY’RE EVER GOING TO FIND IN THEIR NOSE EVER IN ALL OF THEIR LIFE.  SURELY.

There are 3 versions in this pack:  Words with supporting pictures, the version above where they draw a matching line, and a list of words with no pictures.

I’m excited to show it to my kids this week!  🙂  I think they’re going to love painting the pictures instead of just having a list of words. 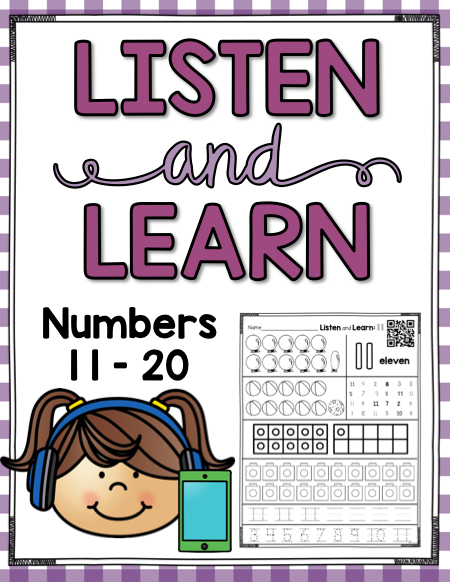 Listen and Learn Activities for Numbers 11 – 20. 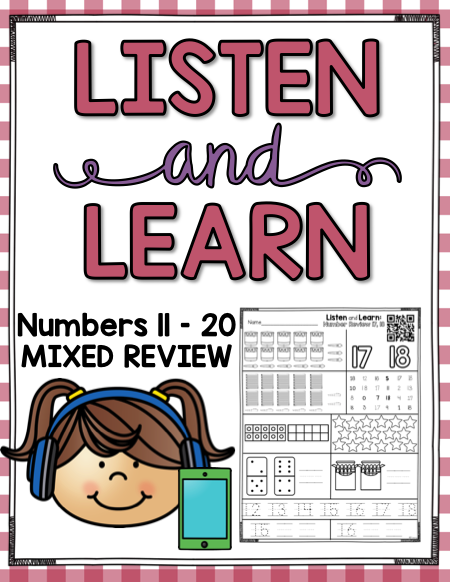 I am hoping to get a Just Add Watercolor for Math going during this weekend, but we will see.  I might have to just enjoy the little bit of time that I have left.

I am so thankful for all of you and thank you for reading my blog every week!!!  THANK YOU!!!!