Five for Fraturday is back!  Hello!!

We are kind of addicted!

And let’s talk about Curling!

I don’t know how or why or HOW (I know I already said how, but still – HOW) this is a sport, but my family loves it!  During the last winter Olympics, Steve and I happened to be sitting in the bar of a restaurant and Curling was on AND BAM!  We could NOT leave.

Last weekend, my parents, older sister, and I took my aunt out to lunch and Curling was on AND BAM!  It was the Ham family and we just had to watch!

My next favorite sport is ice skating for all of the obvious reasons, and then I watch a lot of skiing and snowboarding with Steve (who used to really involved in that for his JOB), and then I’m watching all the scary stuff where it’s also like HOW IS RIDING THIS TEENY TINY SLED DOWN A WATER SLIDE (without water) AT BREAK-NECK (literally!!) SPEED A SPORT?!?!

I’ll pretty much watch anything if it’s the Olympics.  We’ve also been watching some sort of thing where the athletes ski, and then shoot targets, and then ski, and then if they miss the target, they have to ski a penalty round or circle or some such thing, and I’m just sitting around asking Is this a new sport?

I’m pretty sure, eventually, if I wait around long enough, they are going to invent a sport that I can compete in!!!

Celebrity Big Brother is happening!  I am a HUGE Big Brother fan!  HUGE!  Steve and I watch it every summer together so when the FIRST EVER Celebrity Edition aired last week, you know I was ALL ABOUT IT!

These aren’t exactly A List Celebrities, but I pretty much know each and every one except for a basketball player named Metta World Peace.  Thanks to Big Brother, I now know who this guy is and that he changed his name to that.  I mean, who knew?  Not me!  It reminds me of Phoebe on Friends wanting to change her name to Princess Consuela Banana Hammock.  But she didn’t.  And Metta World Peace DID.

In the normal Big Brother house, the houseguests have to endure a Have-Not situation, meaning half the house (or even just three or four) have to eat slop, take cold showers, and sleep in the Have-Not room (which is basically a torture chamber with no warm beds or anything).

This celebrity cast is not dealing with any Have-Not-ness.  And not only that, they have a BAR in the house.

Typical houseguests are constantly saying they wish they could have a glass of wine or a beer!

So these celebrities are not having too much of a rough time.

But whatever – I am loving it!!  It comes on four nights a week (I KNOW!) and I only watch it when I’m on the treadmill which means I’m guaranteed to walk at least four times a week.  WIN WIN.

Hey!!  I just thought of a new Olympic sport!!

How long can one walk on a treadmill while watching Reality TV?!  I bet I’d take home the gold! 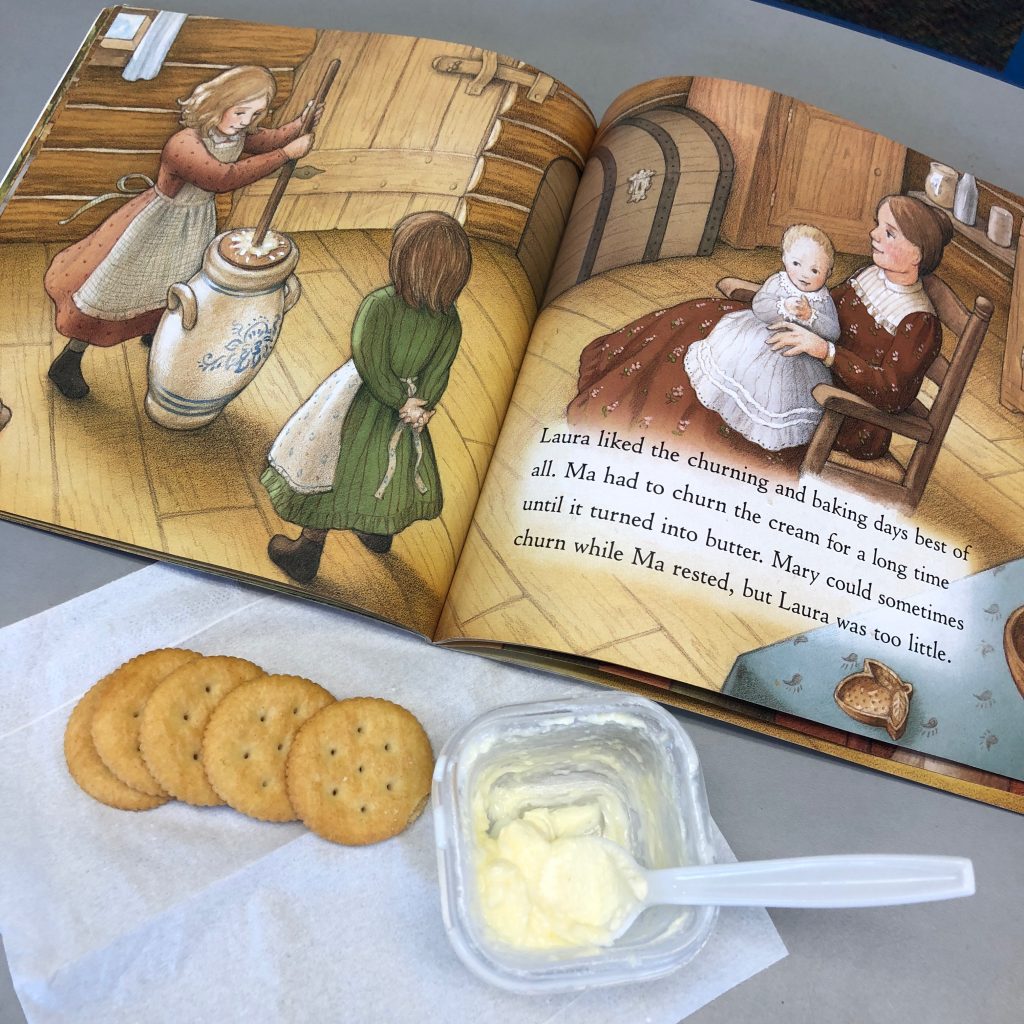 Our Open House is usually at the end of May, but this year, we are having it at the end of March, right before our Spring Break.  My team and I “theme” it out with what Life was Like Long Ago.  We do a lot of comparing and contrasting, we make scrapbooks, we “square dance”, we study the transportation, the homes, the clothing, the work, etc and WE MAKE BUTTER!

I’ve blogged about the Little House on the Prairie picture books countless times, and here I go again.  These books are AMAZING. I just love them and my kids end up loving them and then we watch a couple of snippets of Little House episodes and it’s all just SO FUN!  My kids get so into this!  They even have beginner chapter books (and several of my kids read them).

I got some heavy whipping cream, put it in a couple of containers with tight lids, and we sat in a circle, passing them around.  I played some Square Dancing music, taught the kids to count to ten in their heads, and they SHOOK AND SHOOK AND SHOOK the containers for the count of ten, then passed it.

One container made butter pretty quickly.

But I spread the good butter on crackers and we ATE IT ALL UP!  🙂  Most of my kids were really brave, but I did have one or two kids who only wanted to eat the cracker.

They had no idea what they were missing out on!

PS Making butter would also be fun to do when you’re teaching Matter. 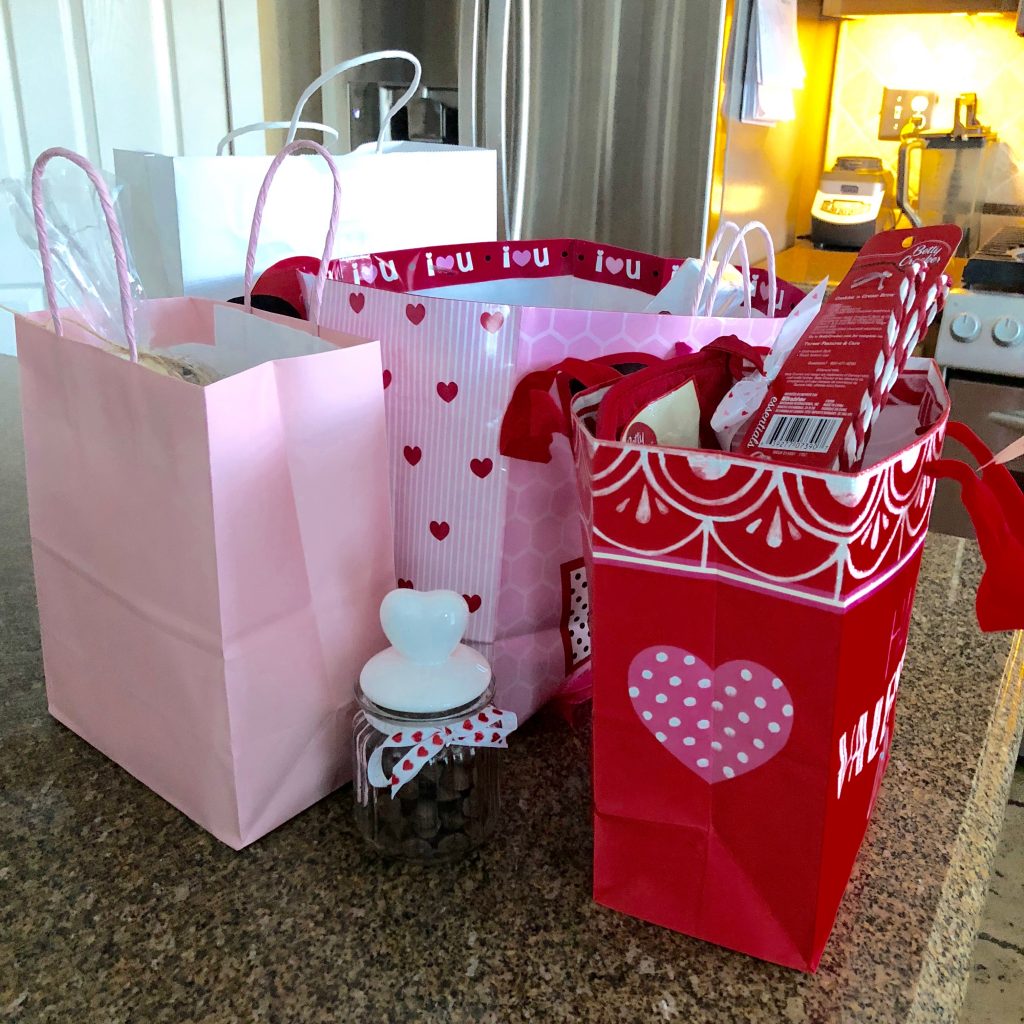 I got gifts for Valentine’s Day.

And when I say gifts, I mean CHOCOLATE.

I condensed those bags, and put some bags inside of others, and STILL.

I could seriously open a CVS or a Walgreens or something.

I spent most of Wednesday night sampling EVERY SINGE THING a la Legally Blonde fashion.  You know.  You take a bite, see if you like it, put it back, and so on.

The only thing I don’t like when it comes to candy is coconut.

Other than that, let’s do it.

Nougat?  Why, of course!

But it’s that healthy kind of chocolate . . . OKAY THEN, I’LL HAVE TWO!

I got rid of all of it on Thursday.  I gave it away, I put it in the teacher’s lounge, it is gone.

I felt very strong and brave.

Even though I cried throughout the giving away process and maybe held onto one or two heart boxes a little too long when the other person was trying to take it from me.

I can’t end this post without talking about the high school shooting in Florida.

I wish I had the perfect words to say.

I am sad and shocked and frustrated and scared and heartbroken.

And the top two are crossed out.

I do.  There’s only so many times you can say “my thoughts and prayers are with you” before it loses its meaning and brings about zero change.

I pray ALL THE TIME.  And I will be praying for change, for answers, for comfort for these families, for safety, for peace, for action, for what I can do.

I pray I find the perfect words to say.

I pray for all of us.

« I Did Not Hit My Benchmark.
Five for Fraturday »