I cannot even believe it, but the new carpet was *finally* installed in my room, and I went in for the first time yesterday on Tuesday.  And then again yesterday.

And I imagine I’ll be going in a lot from here on out.

Because our first official day back is next Friday.

My stomach just did a somersault.

One thing that I can cross off my list is my Welcome Letter, thanks to Jodi over at Fun in First!

Which means written with your hand.  In this case, my hand.  And sometimes, my teammates and other teachers would tell me they printed a label and stuck that on the postcard in order to skip the whole handwritten thing.  And I can’t blame them, either, because handwriting 32 postcards can make your hand fall off.

And I’m not exaggerating.

But I always felt like I had to handwrite my postcards because it was a nice, personal, I’m taking the time because I already like you sort of gesture.

Jodi at Fun in First became a genius.  And she shared her brain with the rest of us.  And now I don’t have to handwrite postcards anymore.

Take a look at this! 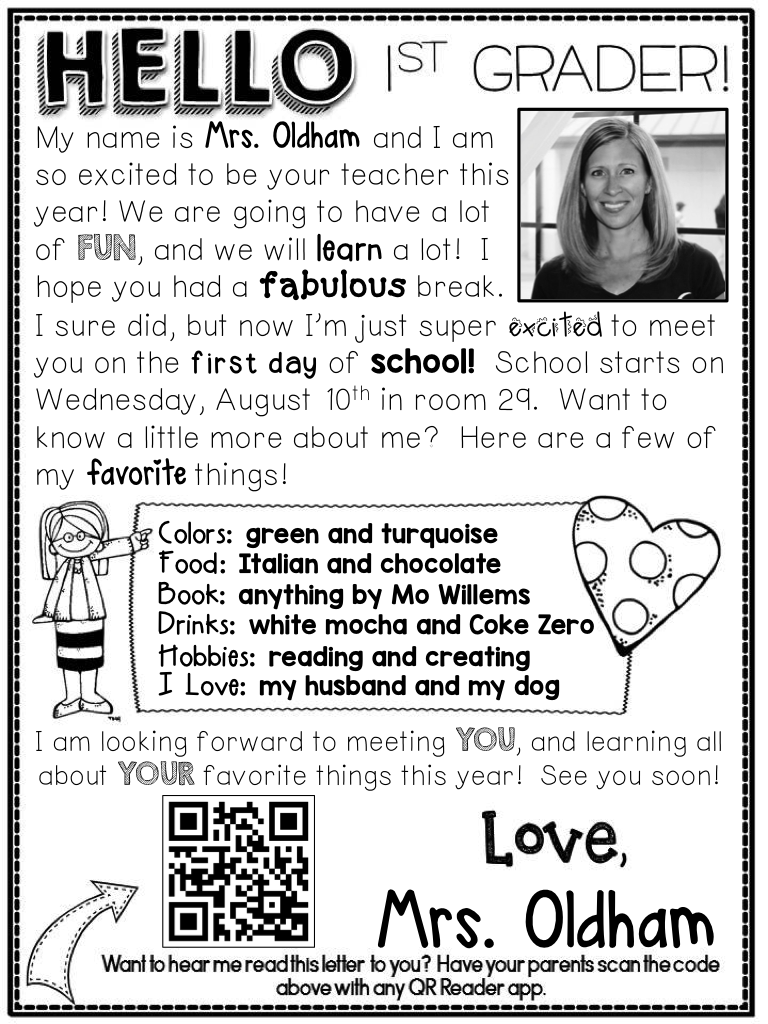 HAVE YOU EVER IN YOUR LIFE?

And the QR code makes my letter personal so there is no reason to handwrite this . . . NO REASON AT ALL.  Because my voice is on this letter!

It doesn’t matter that I had about 4893 takes until I couldn’t take it anymore, and just had to accept that the sound coming out out of the QR code is how my voice sounds.  I mean – I don’t like it.  After trying out the sample of the Reading and Listening Comprehension passages, some people said my voice was not what they expected.

Someone said I sounded taller.  To which I instantly said, out loud, well, I was an alto in vocal music and show choir . . .

I just think this is THE COOLEST THING EVER.

And let’s all just take a moment to notice that I used the same picture as my blog picture.  Ahem.  Well.  So it’s not the most recent picture of me, but it’s in black and white so who’s going to notice, really?

I can’t wait to mail mine out.

Apparently, when I went into school on Tuesday and Wednesday, I was working for free.

PS If you want your own letter, head to Jodi’s right {HERE}.  She has a free template and step by step directions on how to record your voice and get the QR code for your letter.  It’s SIMPLE!!  🙂

I did have to message her because, for some reason, the QR code wouldn’t download.  Jodi suggested right clicking and saving it.  That worked perfectly!

But I eventually did figure out my download problem.  I was using Safari.  Once I switched to Google Chrome, it was much happier and let me download the QR code.

So that’s just a tip.

From me to you.