Today was a fun day.  I went to school but I had a sub.  That’s because my principal got my team subs so that we could administer running records without interrupting the flow and rhythm of curriculum.

That’s what happened last week during District Assessments.  The flow and rhythm of curriculum, fidelity to the core, and first best instruction flew right out the window as I pulled kids in small groups and one at a time to torture myself with.
I love that my principal does this for us.  Two years ago, when our class sizes went up, and this time of the year rolled around, she found us in a heap in her office with mostly bald heads and bad acne from all the stress.  Ever since then, she gets us each a sub for one day.  And a wig, if necessary.
I love it.   LOVE it.
There’s just nothing like pulling every single one of  your kids out of the classroom for a little one on one.  It is fabulous.
Yesterday was good, too.  I gave my kids the end of the trimester writing benchmark that I showed you last year.  Here it is again in case you didn’t get it then. 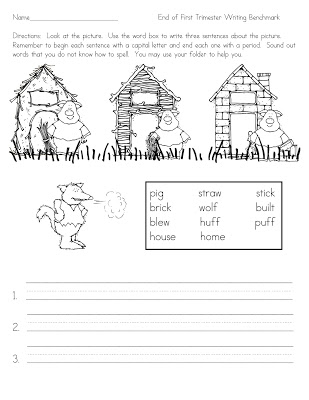 (click the pic to grab it)
Before we started writing, I read the story of the Three Little Pigs. Except there was an itty bitty problem.  I didn’t have the story.  So I went next door to borrow it from my partner.  And she said, “I’ve got to warn you – this version is a little . . . different.”
So, anyhow, to be on the safe side, I told my kids that the wolf wasn’t very nice in this version.  And that’s all I said.
They said they knew.  He’s the big bad wolf, after all.
Deep breath.  Here we go.   We’re off.
I began reading this version: 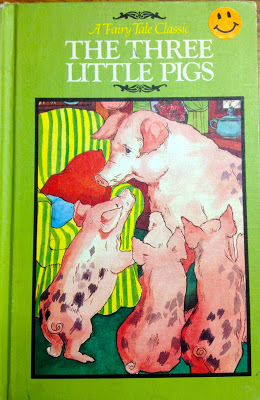 And, sure enough, the wolf blew the first little pig’s straw house down.  The illustration was so sad.  Look at that poor little pig’s face. 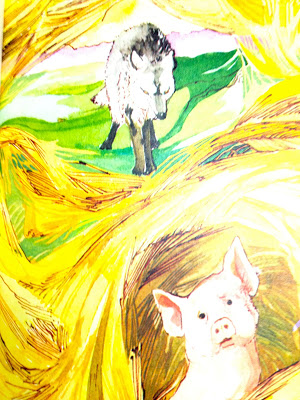 I might have said that to my kids.  “Oh, look at that sadpoorlittle pig’s face.  Awwww.”
And then I read, “And the wolf ate the first little pig all up.”
My kids GASPED.  Loudly.
I was shocked.  Plain shocked.  He ate that sadpoorlittle pig?
The looks on my firstie’s faces . . . well, I’ll describe it as horrified.
I started to wonder if they were going to tell on me to their parents that I read this book.  Or were they going to tell on me to my principal?  I mean, what kind of world do we live in that wolves eat pigs?  Huh?  Huh?  What kind of teacher am I that I would read a story in which a wolf blows a house down after the pig won’t let him in by the hair of his chinny chin chin, and then the wolf eats the pig?  Huh?
I continued reading and, sure enough, the wolf blew the house of sticks down.
And there was another sadpoorlittle pig sorrounded by sticks.
And I read, “And the wolf ate the second little pig all up.”
GASP!  Louder this time.  The horrified looks were more horrified this time.
And then I was inappropriate.
Because I giggled.
Shook my head.  Stop, I said to myself.
Giggled again.
Shook my head harder.  Stop! I said to myself.
Began to read . . . and started laughing.
My kids gasped.  “It’s not funny!” they cried.
I said, “I know!” while I laughed.
I don’t know why I laughed, but I’m laughing now.
Why is this funny to me?
Half my kids joined in the laughter and the other half asked for a transfer out of my class.
This version has the last little pig eat his soup alone.  The kids told me the first and second little pig were supposed to run out their back doors and find safety in the brick house.  Then they all have soup together.
How is it that I don’t know this?  And what the heck version did I read last year?
I told the hubs this story.  He said, “That’s funny.”  He failed to guffaw which is what I like him to do when I tell him a funny story.  I’ve told him this countless times, but he has not internalized it, apparently.
Then he said, “The whole thing’s funny.  I mean, when’s the last time you saw a pig build a house?”
And then I rolled.
I laughed and laughed.
I have no idea why this is so funny.
Giggle snort.
« Pinterest Scares Me
Cake Walk Freebie »