On a couple of things.
And since I can’t figure out how to add that cool feature to my comment section where I can hit reply and talk to you on a more close knit one-on-one basis, this will have to suffice.
This week our Sharing Topic was to bring a baby photo.

I love this topic.  Seeing these first graders as little babies has made me fall in love with all of them even more.  I L*O*V*E this class.

I have also now decided that I never want the identical twin boys that I have to go to second grade.  Ever.  Their baby pictures made me want to put one twin in each pocket and surprise the hubby when I got home.  We have only been in school 25 days, and I know I have a lot more time with them, but nope.  I don’t want them to ever leave my classroom.

I just can’t explain it.
One example is that when my little girl who speaks neither Spanish nor English fluently finally got up the courage to get in front of the class to share her baby picture, the twins clapped and clapped, and then one said, “Ya can’t let fear stop ya!”
I’m not the only who feels this way about them.
EVERYONE loves them, including our secretaries who would normally tell a kid to get up, that’s my chair, why are you touching my phone, what are you doing . . . because they love to watch them pretend to be doctors while they wait in the office for their mother.
“Hello.  I’m Dr. Twin!” one says.  And the other one says, “No, I’m Dr. Twin!”

The second replies, “Yeah, yeah, yeah, I like that better!”

So that’s the skinny on that.
The other follow up is to my post – Pencils Are a Pain.
Not anymore.
Hallelujah.
This baby has SAVED MY LIFE. 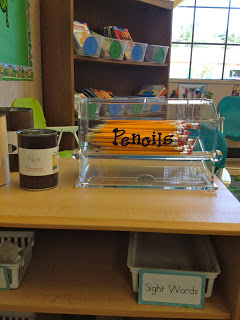 Seriously.
No more mixed up pencils.
I wish I’d had this sixteen years ago.
My only complaint is that the left knob of the turn thingamajig was falling off in the beginning and I would just screw it back on.  But then after three times of this-is-ruining-my-day-I-must-get-a-grip-there-are-worse-things-than-a-broken-knob-such-as-being-a-written-in-candidate-to-be-a-union-representative, I finally got smart and hot glued that knob on.
All is well.
Unsharpened pencils go in the cup.
Period.
(Well . . . some have to go in the trash.  A certain someone in my class has mistaken pencils for breadsticks or something.)
Anyways, it is BRILLIANT.
Last, did you hear that I was written in as a candidate for our union rep election?
Because I was.
And that is not funny.
The ballot had four names on it.  Cool.  You can vote for up to five people.  So I just checked all four names.  I thought to myself thank goodness someone wants to do this every year because it’s not for me.  Toodle doo.  And then I turned my ballot in.
A couple of days later, an upper grade teacher came over to let me know that someone had written my name in.
WRITTEN MY NAME ON THE BALLOT.
Without my approval or my interest or my say so or, or, or, or . . . they wrote MY NAME ON THE BALLOT.
I said, what?  That’s so funny.  You’re so funny.  Ha.  Hee.
And she said, “It’s not a joke.”
?????????????????????????????????????????????????????????
I told the hubs and he said, “You can’t do that.  It’s not in you.  You can’t confront people.”
I yelled, “I know!  DUH!  THAT’S WHAT I SAID!”  (Because, as it turns out, I can stand up to the hubs which drives him crazy, but it’s because I know he loves me and he won’t leave me so it’s sort of his fault.)
I had to lose a couple of night’s sleep while I figured out a way to tell the upper grade teacher that I couldn’t do it.
I decided to pull a Phoebe from Friends which I’ve used before.
“I really wish I could, but I don’t want to.”
I mean, really.  Me?  I don’t think so.
The newest news to me is that my friend, Christina, who you all know just moved to North Carolina, told me that they don’t even have unions.
I don’t get that.  Who fights for you?  I mean, obviously not me, but who fights for you?
Do you have a union???
« Writing and I Don’t Know My Kids
Following Up on the Following Up »