Good morning.  I slept for a lot of hours last night.  I can’t really remember anything about it, but I know it was absolutely wonderful.

Let me start this post off by saying that I did not want the last post to bring about feelings of political angst or anything.  I’d rather not talk about politics on here.  As my pastor says, I should be a peacemaker.

With that being said, when I talked about the unions, I meant more of the type of union that matters to my friends and me at our school site.  Not the outside world as much.  You have to remember that you’re talking to a girl with a 9 year old car that only only has 70,000 miles on it.  I tend to stay in my own little world (I do travel far to see the dentist, and the hairdresser, and the eye doctor, and my family, but that’s all).

In other words, I kind of meant who fights for you the way our union fights for us so that we do not have to stay past our contract time for a staff meeting or a workshop or anything else the powers-that-be might plan for a fun evening spent at school.

In my old school district, it was not at all uncommon for staff meetings to run past 5:00.  Or to be voluntarily signed up against your will to attend a workshop after school without being paid.  I had no idea that was even a problem.  I just did it.

So our staff meetings are before school starts which is absolutely genius – there is no way that they can run long.  We’ve got to go.  Students are arriving.  And then, if you want to impress your principal, you could make a statement saying something along the lines of, “Aw!  Bummer!  I was really into this staff meeting matter and we’ve run out of time.  Pooh.”  (Just for the record, that has NEVER come out of my mouth, but I’m just saying if you wanted to, you could.)

Workshops after school?  Well, first of all, you can’t get signed up against your will.  And, second of all, you get paid if you do sign up.

I always sign up, but now we don’t really have those opportunities, what with the budget being what it is these days.  You know – practically non-existent.

So that’s kind of what I meant about who’s fighting for you . . . because I really hope your staff meetings are as short as mine, and that if you do have to attend anything after school when you’d rather be home with your family, or your dog, or at the gym, or grading papers, or doing laundry, or creating a unit, or making dinner, or going to your kid’s baseball game, or paying the bills, or learning about Common Core, you at least get paid for it.

And not to stir the pot in any way, shape, or form, but let me just say that I also have air conditioning in my classroom, and if it went out, my principal would let my class take over the library, or the lunch room, or something while the proper district personnel came out to fix it.

The last thing I need to follow up on is the pencil dispenser. 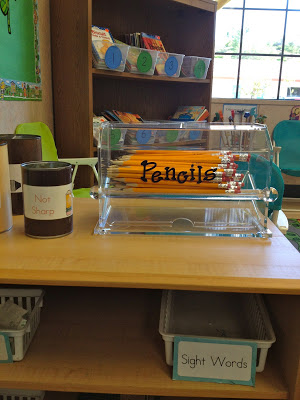 It turns out that instead of following up on this bad boy, I actually caused a few more questions.
So.
To find out where I got this wonderful thing that has created rainbows, puppies, and a kitten or two in my classroom, you can read about it in my original post {HERE}.
And, to be clear, when the knob kept falling off, it was not due to my kids’ overzealous energy to get a newly sharpened pencil.
The knob was loose to begin with.
The hot glue is totally working.
And so is the whole system.
I L*O*V*E it.
Now, I am obsessed with acquiring the quietest pencil sharpener in the world.  I’m sure you’ve seen them on the blogs.  I’m sure you have one.  Or I’m sure your principal bought one for every classroom in your school. 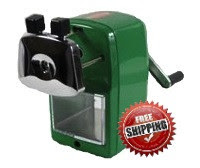 (source)
I finally decided I needed one when my upper grade peer helpers  come to help me, and I keep telling them they can’t sharpen pencils due to the noise.  (They come on their lunch hour at the ungodly hour of 1:20 in the afternoon which means my kids are actually in class because we are pretty much finished with our lunch before it’s actually considered lunch time.)  So my wonderful upper graders are sharpening pencils with the hand-held personal kind.  Over the trash can.
It’s the last thing they do.  First, they test kids on math facts and sight words.  Then they file papers in the cubbies.  Then they check to see if I have anything else for them to do.  Finally, they sharpen. I am beginning to think they don’t like hand-cranking or something.
Which means, sometimes, I have to sharpen pencils after school.
I know.  What is the world coming to?
So then I remembered about the quietest pencil sharpener in the world and I thought to myself, it’s time.  It’s time!  This is the perfect answer.
Uh, no.
Not quite.
Here’s the problem.
They are SOLD OUT.
They will not be getting any more until mid-November.
I’m tho thad.
Tho, tho, tho thad.
I’m trying to pre-order one.
Theriouthly.
« Following Up
Saturday Drama, Pencil Sharpener, and Love »