And you know what that means, right?

Couples Therapy on VH1!
I am obsessed with this stupid show and I wish it came on every night and I also wish it would never end.
Juan Pablo and Nikki are fascinating.
And I’m telling you, even though we are not fans of Juan Pablo (we were, but then we weren’t, right?  I’m trying to remember and I’m too lazy to go back and reread all the Talk About It Tuesdays) . . . even though we are not fans of Juan Pablo, Nikki is no slice of pie, either.
Nope.
She’s kind of an angry bird.
Grrrr.  Grrrr.
Slam door.
Grrr.  Grrr.
Dirty look.
Seriously.  You’ve got to watch for yourself.  I can’t explain it.
Okay, enough of that.
I’ve got some real educational stuff for you today so lean in close.
Closer.
Not that close.
Okay.
A long time ago, on Pinterest, I saw a 4 star writing rubric plan.  And I liked it.
But did I pin it?
No.
I’m not a good pinner.  Still.  I know.
Anywho, I have no idea who/what/where/when/why/how I saw it and who it belongs to.  So holler if it’s you.
I had always wanted to make one for my class . . . but I never did.  I think I was too busy watching B list celebrity couples fall apart on live TV.  Either that or I was eating ice cream.  Take your pick.
I am happy to announce that I finally did make a 4 star writing rubric.  Although it’s not just for writing.  It’s pretty much for anything when it comes to effort throughout our day. 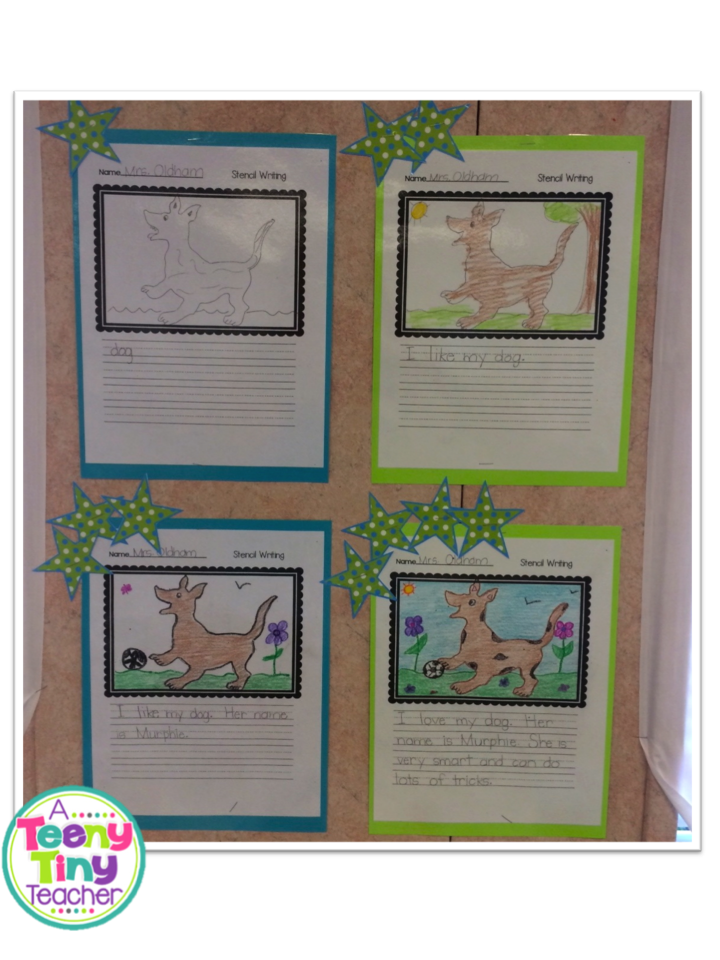 These “posters” now hang up in our writing center (between my two windows – as you can see, I stapled the curtains because that’s how I roll) and, even though it’s in our writing center, I keep repeating that it’s not just for writing.  The writing center just so happened to be a good central place for the posters in our classroom.
I used my dog stencil to draw that pup.  I don’t have drawing skills.  AT all.  That is because I write.  I don’t do both.  My brother is actually a terrific artist and we used to say that I would write children’s books and he would be the illustrator but, sadly for him, I found clipart.  And instead of writing children’s books, I apparently write children’s plays.  And that’s all.
Anywho, I drew four versions of the same dog and bumped it up a notch each time.
By the way, I did this after school.  In my classroom.  And I enjoyed it.
The next morning, I showed my kids all four papers and they decided which one should have 4 stars, which one should have 3 stars, and so on.
Each time, I would ask volunteers to explain why this paper only deserved one star or why this other paper deserved three.
Lots of reasons were given, such as
It’s not colored in!
All it says is dog!
It has beautiful background!
I love ladybugs and that one has a ladybug and one time, a ladybug landed on me and I thought it was a bee and I screamed and smashed it and accidentally killed it and so I cried.

Once we decided which papers deserved which stars, I hung them up and slapped some cute stars (they go with my decor, don’t ya know) on each poster according to how the class rated them.
And now I say:
Make it a THREE STAR PAPER!
(Because 3 stars is acceptable, right?
I don’t want anyone to get a complex!)
And most of them whisper to each other or to themselves or to the air (because we almost never stop talking ever):
I’m going to make it a FOUR STAR PAPER!
And then, when I get something that looks rushed and sloppy and has nothing to do with their capability and everything to do with I am rushing because I want to draw a picture of my own now or I want to work on my whiteboard now or I want to read the new Elephant and Piggie book now, I say:
Please go back and make this a THREE STAR PAPER, please.
This system makes me so happy.
I can’t even tell you.
Well, yes I can.
It’s makes me as happy as FOUR STARS!
🙂
So thank you Pinterest Pin that belongs to a person on a blog that I do not know the source of.
Thank you.
You deserve four stars of your very own.
Whoever you are.
« Reader’s Theater just for Kinder Kids!
Five for Fraturday »