Right before school got out, I received an email from our school secretary telling me that I would be getting a new computer.

Then I began to wonder things as I usually tend to do when I am told something that is surprising and unexpected.

I wonder if they will take one of the old computers away?  I wonder if they will let me have three computers now?  Three!!  WOW!  Wait.   Shoot.  Three is odd.  If I have a center of 4 kids, one kid is going to have to share.  Well, technically, that means two kids will share and two will get their own.  I wonder if that will cause problems?  I wonder if it will be faster than the computer that runs my ladybug?
Then school ended and I forgot all about it.  It never came.
Until I went to school on Monday and saw that I.T. had, in fact, delivered a new computer.
AND A NEW PRINTER!
Jackpot!  I said.
I should go buy a lottery ticket!
And then.
I realized what they did.
Before I state the following, I’d like to go on record, officially on record, and say that I am so so so thankful for a new computer and a printer and this is not a complaint.  Just an observation, let’s say.  A teacher observation that I’m not sure other people in other professions would think two thoughts about.
I did not take pictures on Monday so for some of this, you will have to use your brain and do some visualizing inside your own head (sorry, I know it’s summer vacation for most of us). 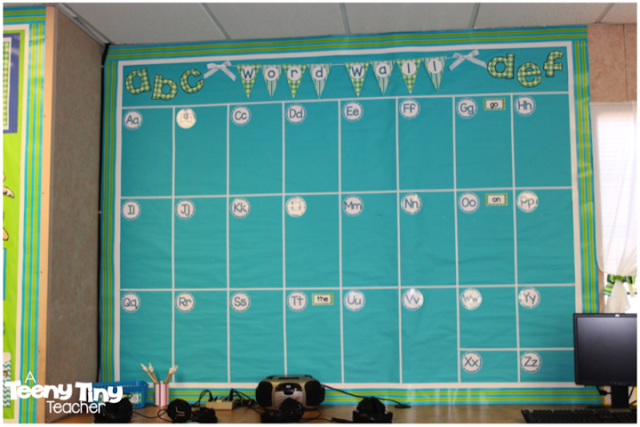 This is my word wall.
It’s above a long long long counter in the back of my room.
(This was taken at the beginning of the school year and in no way
reflects the actual number of sight words that we learned and/or
my failure to hang up new words as the year went by) 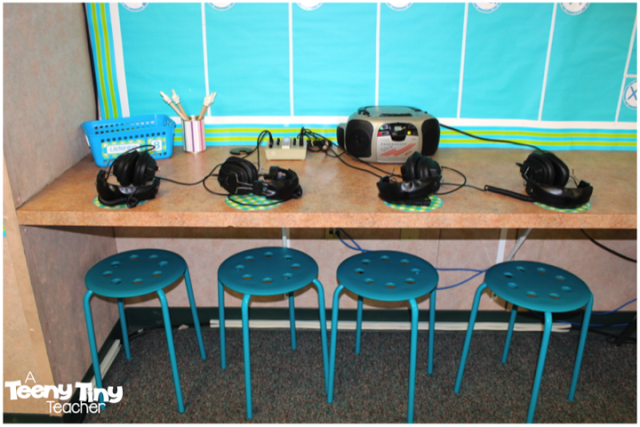 The listening center is in front of the word wall. 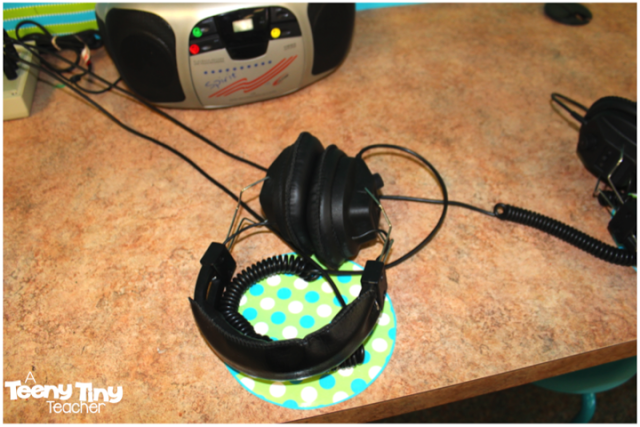 Each headphone goes on a circle so that
it stays somewhat organized.
And untangled. 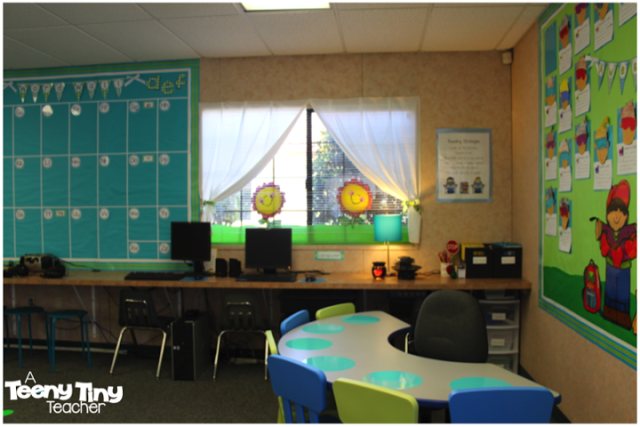 This is the long long long counter that is continuing down the back of the room.
Now.  I ask you.  You.  A TEACHER.  Look at that big ole long counter and think.  Where would YOU put the third computer?  So that it doesn’t block the words on the word wall?
I’ll give you a minute.
Okay, you only needed a nanosecond because I can bet that you see there is a perfect spot right next to the computers on the right hand side.  See it?  Right there in front of the flower on the window.
It’s practically begging for one more computer to be set up there.
Look at me, it’s calling out.  RIGHT HERE!  I’m the perfect spot for a new computer!
Except I.T. did not see it that way.
Or even use their eyes at all, I think.
Because do you know where my new computer ended up?  Do you?
Yes.  Exactly.
This is the part you have to picture in your mind.
When I went to school on Monday, the new computer was sitting in front of the word wall, blocking the letters Q, R, S, and T.  And, not only that, they (I don’t know who they actually are, but I am assuming he or she or they are tech savvy people and not teachers) shoved, literally shoved, and piled my listening center headphones back against the wall (OFF THE CIRCLES, I’M TELLING YOU, THE CIRCLES THAT KEEP THE HEADPHONES ORGANIZED, PEOPLE!) and tangled things all up and what resulted was a useless listening center.
Useless.  And sad.  Tho thad.
I mean, you can’t even get to it.
And!
They moved my ladybug document camera over there, too, and it is no longer on the little cart in the center of the room where I do the teaching part of my day when I use the ladybug.
AND!
They put the printer there, too, and it’s a HUGE-SUPER NICE-DON’T EVEN KNOW HOW TO WORK IT-printer and it is blocking the letter U on the word wall.
AND AND!
Someone, and again, I have no idea who, sat on one of my little turquoise stools while they were installing, hooking up, whatever-ing the new stuff and now the little stool appears to be a bit wonky.  I think.  It’s possible one of my kids made it wonky last year and I just hadn’t noticed or it could be from that one or three or seven times that I stood on it to add a word to the word wall.  It wasn’t that many times because I kept forgetting to add new words.
All of this is to say that I am so grateful (REALLY) for new technology and I cannot wait to use it, but I feel like everyone needs to know that I will clearly not be at fault, nor should I be held accountable, when my future classes have no clue how to read or spell words that begin with the letters Q, R, S, T, or U.
Shoulder shrug.
Q isn’t that important anyway, right?
😉
(PS  I already told Steve he has a ton of work to do when I’m allowed back in the classroom.  He said I.T. guys (and girls) have one thing on their mind.  And it’s not a word wall.  Or a sandwich.  Or even wine!  It’s techy stuff.  Who knew???)
« Five for Fraturday
Five for Fraturday »