It might be Christmas Day for most of the world, but over here at my house, it’s all over.

Not entirely over, but pretty much.

Took Kerry to the airport yesterday.  How about you take a moment of silence while I cry?

Our Christmas was on the 23rd this year.  We wore pajamas all day.  It wasn’t my idea.  Really.  Everyone was on board except for my parents and brother.  They looked really funny, but oh well.  My oldest niece invited her boyfriend.  He just so happens to be six foot six.  Needless to say, he does not fit into our family.  I may be the runt, but my dad can’t brag about being five foot five, now can he?  We played bowling on the Wii and her boyfriend had to kneel because the sensor thingamajig didn’t work for him.  And if I was sitting on the couch and he was sitting on the floor, I’d have to yell, “Down in front!” because I couldn’t see anything.

Yesterday, we had Christmas with my hub’s family, went to church, and had our traditional Mexican feast.  Because we are not Mexican and that makes sense.

Edited Addition:
I’ve said before that we go to Saddleback Church.  Well, the Christmas Eve service featured the High School Ministry band performing The Little Drummer Boy (which I think is actually the Justin Bieber version but why would I know that?).  It’s crazy good.  The video below is from December 3 when they first did it but I couldn’t find a video from yesterday’s service.

Anywho, before you watch, some things to consider:
1.  I don’t understand much of what is said when the kids are rapping.  I think it’s because I’m too old.  Maybe you’ll do better.  I think the blond boy is very concerned about his hoodie messing up his hair.  Much like me.

2.  The girl on the keyboard doesn’t seem that into it.  I don’t know why.  Maybe she wanted to rap??  But give her some time.  She livens up a bit at the end.

3.  I am just fascinated by the drummers.  I think they’re crazy good.

4.  At yesterday’s service, the congregation went nuts as if we were at a concert.  Well, all right.  Maybe that was just me.

Let me know what you think! 🙂

I’m finished editing.  That’s all, folks.  The rest of this post is what I already said earlier.  I would have written a whole new post but somewhere out there is a rule about not posting twice in one day.  Notice how I got around that?  Sometimes, my halo gets a little bit crooked.

Today is ordinary for me.  Which is why I am blogging.  And the hub is still sleeping.  I’m going to get up in a little bit and make some coffee and cinnamon rolls.  No, silly!  Pillsbury.  Who do you think I am?

I am going to try to start my thank you cards for my kids.  I like to mail them over the break because I’ve heard that kids love getting mail (I do, too, but I mainly get bills).  When we used to be a year round school, I’d mail my kids something every time we were off track.  So this is pretty much my only opportunity.

I hand write them.  I know.  I have the time since I’m not making homemade cinnamon rolls.  Plus, I like my printing.

I have to write 29 this year because I got a class gift (I’ve debated telling you what it is.  Is it tacky to take a picture of all of my wonderful gifts?  I can’t decide so I’m going to refrain.) and I have no idea if every family contributed or not.  And I’m sure others gave more than that guy and so on and so forth.  So I’ll just be sure to send out one to every kid and then the families that didn’t chip in will feel guilty will be confused when they receive it.

I stopped buying thank you cards a couple of years ago.  I’m cheap thrifty.  So I made some of these: 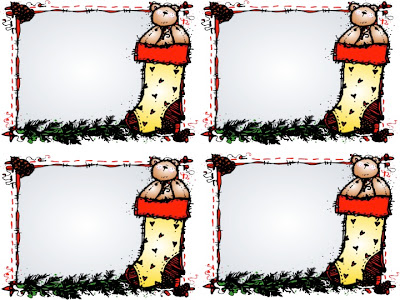 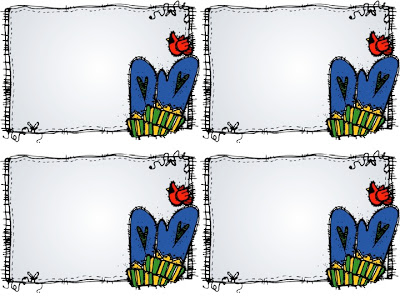 I print them out on cardstock, cut them apart, and get to writing.  I use the Invitation Envelope size for the mailing.  I created four different “designs” (ha!!!) and if you click the picture, you can have your pick.
I hope you enjoy your day, whatever you’re doing.  I’ll be stalking blogs and watching movies because we’re forced to stay in our pajamas all day.  It’s actually not even a choice – nothing is open.  What am I supposed to do?  I have made it a goal to have a Kristin-sized dent in the couch by the end of the day.  I’ll let you know if I meet it or exceed it.
Merry Christmas, virtual friends!  You have been such an inspiration to me and all that other good, mushy, stuff.  THANK YOU!!!!!!
« Oh brother.
Top Three »