I have to start off this post with a huge thank you.

THANK YOU!
I can’t believe how many people stopped by my TpT kiosk.  Thank you so much for purchasing one of my items (or both).  Seriously.  I am thrilled and I am super thankful.  I haven’t taken the time to speak with my office manager about setting the prices back to regular . . . so feel free to head on over there while both items are 20% off.  It’s too hot for me to do anything else so they’re still on sale.
It was hot.
Like, all day.
So, I introduced the Music Box.
I didn’t want to.
And I really didn’t have to.
But I did.
I just felt like throwing another trick at them.  A what-what.  A “First Grade is so cool that even though we don’t ever get to go out to recess ever, you will love it more than kindergarten in here.”
Do you use a music box?
I have no idea who, what, or where I got this idea from.  It’s not my original idea.  But I’ve used a music box for years.
Basically, I wind the box up at the beginning of the day.  Mine happens to be a Winnie the Pooh music box.  It’s pink.  It’s old.  The lid doesn’t want to close on it very well anymore.  But it works.  And it plays the Pooh song, whatever that is.  It’s kind of in my head right now, but I don’t know the words.  Just the tune.  If only the box would play the words . . .
It sort of looks a lot like this: 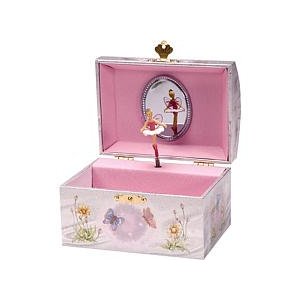 (source)
But instead of a ballerina in a tutu, it’s Pooh.  In a shirt and no pants.
Huh.
I think I got it from Walmart a million years ago.  That might explain why Pooh only has a shirt on and no pants.
Anyways, every time my class gets too noisy or chatty, I open the music box.  And music spills out.  Uh oh.
The kids then hear the music.
Which triggers their brain to send a message to their mouth to STOP TALKING ALREADY.  (Except for the occasional kid who yells, “THE MUSIC BOX!  SHE OPENED THE MUSIC BOX!!  SHHHH!  SHHHH!  THE MUSIC BOX!!!!”)
When it’s quiet (and they have finally stopped talking already), I close the music box.
I do this all day long.
Open it.  Close it.  Open it.  Close it.  OOOOOPEN IT.  Close it.
At the end of the day, we check to see if we have any music left in our box.  I count, “1, 2, 3, shhhhh.”  And the kids do it with me because they are so easily swayed into doing what I tell them to do.  “1, 2, 3, shhhhh,” they say, as they lean forward in their seats in the hopes that some music will eek out.  It’s precious, I tell you.  Little wide eyed faces.  Clasped hands under their chins.  Precious.
If we have music left over, we each get ONE WHOLE STARBURST.  A WHOLE ONE, people.  I know, I know.  I am SO generous.  (Parents donate the starbursts.  In the old days, it was a Hershey’s kiss.  It could be a sticker.  It could be whatever.)
If we don’t have any music left, (and we usually know when that happens, because I’ll just leave the lid open for the rest of the day, and Pooh just stands there.  Silently.  Dejected.  Almost like Eeyore.) then we get nothing.  NOTHING.  Pooh.  On that.
My kids went crazy for it today.
And with no recess, I kind of needed it.  This particular group is really well behaved and sweet . . . so when I say they got chatty, I mean that four or five of them talked at the same time.  Whoa.  I thought I should get a handle on it before I lost all control.
And instead of playing Heads Up, 7 Up for Inside Recess (I’m holding off on Adventure to Fitness because it’s another trick up my sleeve), I passed out whiteboards.  And, once again, I’m the greatest teacher in all the land.  That’s right.  Got my crown back.
So.
That’s the music box.
I don’t know if you want one.  Or if you’ve already got one.
But click {HERE} for a bunch listed on Amazon.  Some are reasonable.  Some are not.
Hadar talked about it at her Kindergarten Expo.  You can check it out {HERE}.  🙂
So do you use a music box?  Or something similar?
« School is Cool
Gone Fishing »