Happy Saturday!  I am off to a birthday party . . . and I’m hoping to eat lots of cake and ice cream.  That’s my goal, anyway.  If a pinata shows up, it will be a bonus.

Before I go, I want to show off my new laminator!

Yes.  I’m a fancy pants and have my very own laminator.  When I told my friend at school, she about fell over.  I said it was common to have your own laminator in the blogging world, but she is not from our world so she had no clue.  I told her I was behind the times.

Kinda like when my family didn’t have a remote control for the TV and everyone else did.  And when we finally did get a remote control, it actually had a long cord that you attached to the VCR and it would only reach so far.

But, people, those days are over.

Because I was contacted by mybinding.com and they said they would send me a laminator.

After I came to, I checked my porch every day for a week straight. Sometimes, two or three times a day.  You never know.  The UPS man could come when I was in the bathroom.  Or watching the housewives which makes me become so involved that I forget I’m living in the here and now, and NOT on some couch in New York or New Jersey rehashing everything.

Notice how it says “Family Laminator”?
Hmmmm.
I may have to white that out.
Hubby is not getting a crack at this. 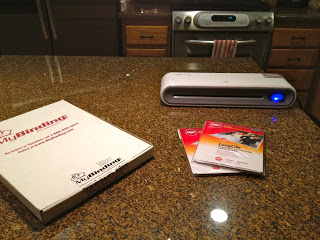 Because I’m the girl who grew up with a remote control
on a cord, those little packs of laminate threw me for a loop.
I thought I had to use all of this at the same time.
It took me several minutes to figure out that the small
packs of laminate are for small things.
I learn something new every day, I always say. 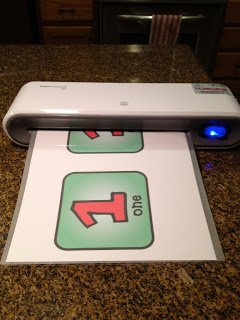 I laminated the numbers for the “Cake Walk” game that I made up. 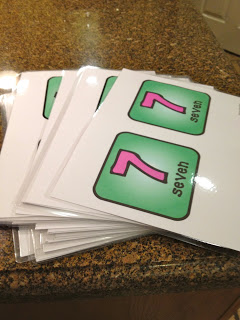 Anyways, it did this whole big pile of numbers while
I just did other stuff.  Mainly I watched “Couples Therapy”
and felt really guilty.
It’s . . . well . . . it’s kinda trashy.
The best part about the laminator is that it heats up super fast.  I’m talking two minutes fast.  Our school laminator takes up most of my morning to heat up.  I’m usually jumping around in front of it, yelling at it to hurry up because the bell is going to ring.
I thought that it was sort of slow in the beginning, but I was either distracted from the 50+ year old actor from the Green Mile and his 17 year old wife on Couples Therapy, or the laminator actually sped (speeded?  Huh?) up as it got going.  It just seemed faster once it got going.  I’m pretty sure.
I am *IN*LOVE* with this thing.
There is nothing not to love.  Not to mention, the laminating pouches that they sent are super thick.  Everyone at school oohed and aahed over the thickness because our school laminate is so thin, you can see through it.
Wait.  You can see through all laminate.
That’s not what I meant.
It’s so thin that when you go to cut it, it sticks to you, and then you can’t get it off or throw it away.
This did not happen with my new laminator.
Yeah, baby.
Anyways, hopefully you’re not too jealous of my new laminator and the cake and ice cream I’m about to have.
« Cake Walk Freebie
Picture Dictionary »