I went to school yesterday.

Except that I woke up earlier than I have all summer.  It was practically dark.  But I knew I would spend the first hour catching up with the other crazies early birds.  And that’s exactly what happened.  I love my peeps.

I put up new butcher paper for bulletin boards.  Much to the chagrin of certain people who think I need to invest in some fabric.  I don’t know.  I’m partial to my butcher paper right now.  It was free. It was easy to cut.  And I understand it.  As in, I just pull a big long strip and that’s all.  I don’t have to do any kind of math, especially the kind of math that involves yards.  I’m good with front yards and back yards, but that’s about it.

It was hard work.

I was exhausted and decided to take today off.

I’ll go back tomorrow after the whole airport thing.  But let’s not talk about that.

I made some “new” treat bags for the parents who show up to P.I.N.  That’s otherwise known as Parent Information Night.  Or People, I’m Nervous.  I hate P.I.N.  All those parents staring at me.  Judging me.  Asking how they’re child is doing even though we’ve only been in school for 7 days.  Asking if I can challenge their child because they began reading in utero.  Asking how tall I am.  Asking.

Stop asking, I wish I could say.

Instead, I pass out food.  To butter them up.   And keep them quiet. Let’s call it strategy.  Last year, I gave out Hershey’s Hugs.

This year, I am giving out starbursts.  I saw a version of this on Pinterest.  Click {HERE} to check it out.  I changed my version for the parents.  I encourage the parents to eat the treats while I talk.  I figure if their mouths are full, they can’t ask me any of those questions.  I highly discourage questions.  What if I don’t know the answer?  Ohhhh, I am just not looking forward to P.I.N. 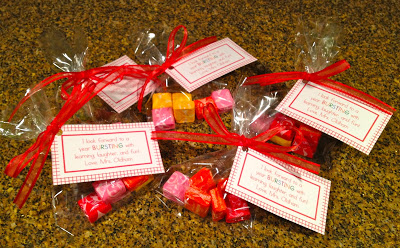 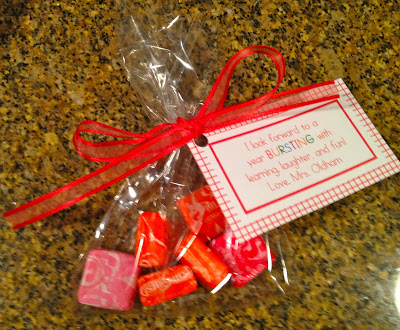 Close up version
Source:  Still My Kitchen Counter
I bought the big bag of starbursts.  I think it’s 64oz or something.  I don’t know.  It’s a LOT of starbursts.  Or, at least, a LOT of yellow and orange starbursts.  I prefer pink and red.  I tried to make sure each treat bag got at least one red or one pink, but it proved more difficult as I continued to sample the merchandise.
Kerry and the kids were a little disappointed when they went for the left overs and all I had were yellow and orange ones.
Even in my stash at school.
Anywho . . .
You can grab a PDF version (without my name) {HERE}.  It’s going to look weird, but it’s okay once you print it.  And it will have polka dots instead of plaid.  That was not planned.  But it’s cute.  Or an uneditable version {HERE} but I have no idea what will happen to this doc in google docs.  But seeing as how I’m on vacation, I’m not going to do custom orders or anything for this.  I hope you understand!  🙂
Today is my mom’s birthday (Happy Birthday, Mama!) and we are going to Farrell’s for dinner.  For those of you who might not know what Farrell’s is, it’s primarily an ICE CREAM PARLOR.  And we are going there for DINNER.
It’s like it’s MY birthday!!!!!  🙂 🙂 🙂  I have already looked at the menu and I know I’m getting a sundae.  Just not sure which one yet . . . Talk about difficult decisions . . .
« No One Threw A Tomato
Currently »