I cannot give up chocolate.  (I didn’t try that hard.)

And I cannot bundle all of my Reader’s Theater plays.  I tried very hard to do it.

Somehow, somewhere along the way, I have written NINE Reader’s Theater packs.

When I figured that out, I wanted to know how in the world I had the time to do that and which reality show I must have missed while I was writing ninety plays.

I have had a few requests to bundle all of my plays.

And, after hemming and hawing, and eating chocolate, I finally decided I’d do it.

The file is way too big.

So then I googled it.

Google said to do everything I had already done.

So then I yahoo-ed it.

Yahoo said to do everything I had already done.

So then I asked some friends.

And, even though their advice was good, it didn’t work, either.

So I gave up and I ate chocolate.

And I took Murphie on a walk.

And then I may have taken a nap because this was after the Zac Brown concert and I was out way too late the night before and I am old and I need more sleep than the regular concert-go-er.

AND THEN I JUST PLAIN GAVE UP.

Instead, I bundled just the Fall plays.  I mean, I have all three Fall packs in a center tub right now so that I can differentiate for my learners so maybe you need to have all three, too. 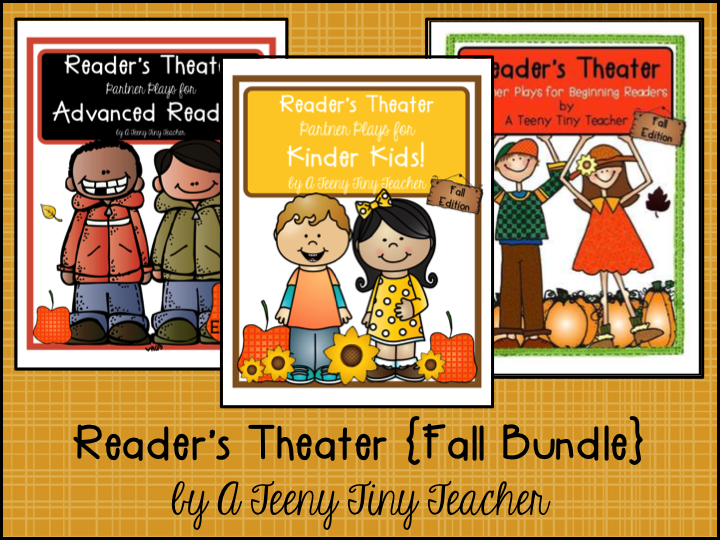 Reader’s Theater {Fall Bundle}
So there.
That’s the best I could do.
I mean, it’s not like I didn’t try.  You heard what I said.  I tried three different times!
It’s 20% off.  I think.  It might be a tad bit more than 20%, but I never said I was a math wizard so we’ll just call it 20% and move on.  It will always be 20% off.
I gave away three of these bundles on my Facebook page, but I thought I’d give away three more here . . . so just leave me a comment on this blog post with your email address and I’ll announce winners on Thursday!
🙂
« Five for Fraturday
Reader’s Theater Fall Bundle Part 2 »