Did anyone watch the Real Housewives of New York Reunion Show, Part 1 (that’s a mouthful) last night????? Talk about JUICY!!! I also watched the Bachelorette (I did admit to being a reality TV junkie here) and I’m still Team J.P. I just wish Ashley wasn’t who he would end up with. 🙂

Okay, so I know for sure that I got this *brilliant* idea from my friends Susan and Christina. Thank you, girls!

Stencil Writing is so simple (and many of you may already be doing it) but my kids love it every year. It is ALWAYS a popular center – lots of cheers and ooohs and aaahs no matter how many times they have already done it. I am pretty sure this would work for all of you Daily Five people, too, from what I’ve read on Kelli’s post about Work on Writing over at Castles and Crayons.

Here’s what I’m talking about: 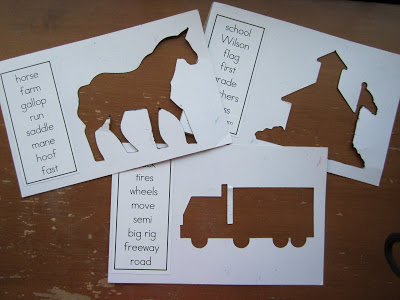 All you need is cardstock (or file folders would work too) and die cuts. Our district’s instructional resource center has millions. When I first did this, I laminated the cardstock, cut it out, and cut it in half. That was one trip. Then I went back and punched all of the die cuts. Once I had those, I made a word bank for each one in sharpie marker. Since then, I have set up a word document in landscape, made a couple of text boxes, and typed my word banks according to the stencils I already had. Then laminated, cut in half, punched the die cuts, etc. I’m a visual person so I’ll show you what the kids do. Pardon my drawing. My kids think I’m amazing but I don’t think adults feel the same! Ha! 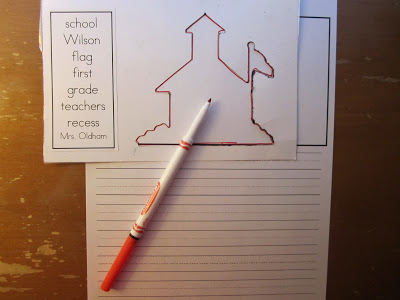 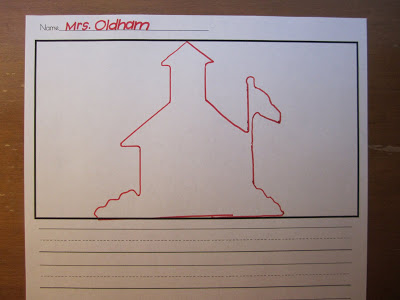 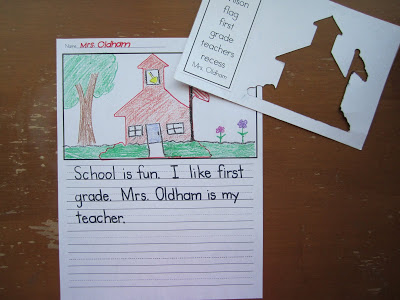 At the beginning of the year, I’m happy with ONE sentence: I like school. But as the year progresses, the kids write more and more. I probably have close to 75 stencils including astronauts, Santa, baseball gloves, sharks, monkeys, etc. Something for everybody! I don’t have a “freebie” for this. You’re going to have go do all of the die cutting on your own. 🙁 But I CAN send you the stencil writing paper that I made if you want it. But I’m figuring a lot of you have that. Just let me know! 🙂

So tell me . . . do you already do this?? Do you have a better idea or sequence of steps to complete it? Do you like this idea? Do you think you might go make it? Would this work for all of you D5 peeps?