Subs – not of the sandwich or boat variety but THE TEACHER KIND is my topic for tonight.  As I was blog stalking, I ran across Alisha’s post from The Bubbly Blonde.  She has to be out for a few days and she posted this picture of her desk: 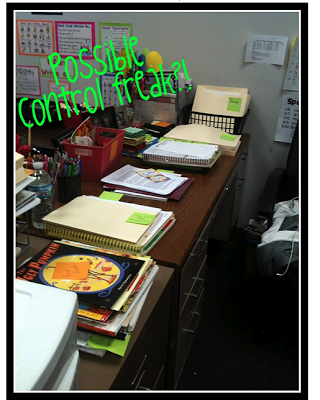 (from Alisha’s blog)
I don’t know about you but that looks almost EXACTLY like my desk does for tomorrow.  YESSS (big sigh), I am out tomorrow.  For a big brew-ha-ha (I know that’s not the spelling but I thought it looked cute so that version wins) at our district office regarding something that I probably shouldn’t even talk about but I’m not even involved in it.  In other words, I don’t really care that much.  And I have to do it again on Thursday.  Yes, the day after tomorrow!  They just need a general ed. first grade teacher there.  I was AMBUSHED by my principal in the teacher’s lounge during lunch last week.  I was trying to bob and weave and duck and cover but nope.  She found me anyway.  And when she asked if I could do this for her, I said . . . YES.  Right away.  With a big smile on my face and a nod and maybe even a giggle.  (Let’s just hope my lips weren’t puckered accidentally.  That is where I draw the line!)  But as I was saying yes, my brain was shouting, “NO!  NO!  Negative!  Have you lost your mind, woman?  Don’t you know I’m assessing?  Don’t you know report cards are due and I haven’t even started them?  Don’t you know that I took a mental health day last week and already lost a day of assessments??  NO!!!!!  Now I have to write sub plans, too, you crazy lady!  WAAAA!!!!”  I mean, if we were having a contest of who’s the busiest person in the world, I would win, hands down.  (Unless teachers that are also mothers entered the contest.  Then I would have to bow out.  But let’s just the say the only other person who entered the contest was my husband.  I would win.  Hands down.)
Ugh.  Anywho, Alisha’s desk looks like mine for tomorrow.  I make organzied piles by subject in the order that the sub will need to teach them.  I mark all kinds of things with post its.  My plans tend to be 9-10 pages long because I am extremely long winded thorough.  Most subs thank me for such “great plans”.  I don’t know what they REALLY think but that’s what they write, in any case.  (Except for last year, when I had a very very very tough class, a sub wrote ONE line and ONE line only:  “I did the best I could.” Ha!)
So that’s how I’ve always prepared for subs.  BUT THEN my friend showed me what SHE does and I got jealous.  Jealous of the idea AND the prep period she gets for half day kinder.  She puts all of her things into a basket.  Something like this: 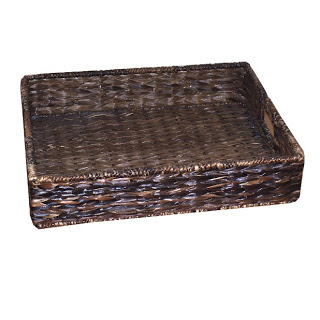 And she puts a ribbon on it and makes it even cuter.  Then, inside, she puts all of the things the sub will need.  But instead of in multiple piles, they’re just in one neat pile in the basket.  And then the sub can walk around with the basket if the sub feels so inclined.  The pile is organized from what needs to be taught first down to the last thing at the bottom.
Here’s the kicker.  She puts a box of Whoppers on top with a cute little note that says, “Have a Whopper of a day!”
So now I need to go buy a basket and get this all ready for Thursday.  It’s too late for tomorrow – oh well.  It’s bugging me but I’m going to let it go.  I have Housewives New Jersey to catch up on and Beverly Hills is on tonight.  I told you I was busy.
My questions to you are:
1.  What do you do when you have subs?  How do you prepare?
2.  Do you have any other “candy” ideas that I can use?  Besides a whopper of a day?  I thought of that m&m candy bar that says “mazing” on it or something.  So “Have an aMazing day.”  Any others???  I like variety.  And choice.  My favorite candy bar is Take 5 but that would never last in the basket.  Ever.  It almost never makes it home from the store.
3.  If you’ve got a sec, go show Alisha some love over at The Bubbly Blonde.  🙂
« Adventure to Fitness
I Am A Guest Blogger »