I don’t have a Five for Fraturday for you.  Again!  I know!!

Steve and I have been in Mexico for almost two weeks celebrating our 20th wedding anniversary.  Our actual anniversary isn’t until August 2, but I have to be back at school on August 4 (insert wide eyed emoji here) and we have family coming to visit in July.

So June it is! 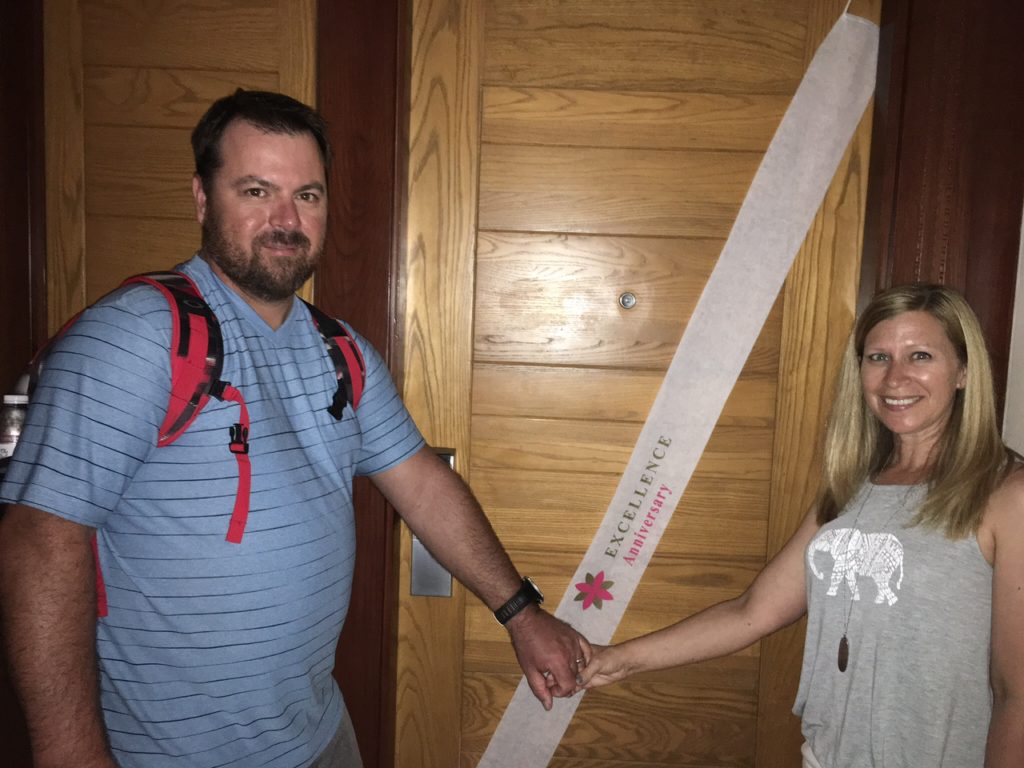 Here we are arriving on the first night . . . hot and sweaty!  Cancun is all kinds of humid and does not work with my hair, let me tell you.  I really really really miss my California hair.  I do not understand, nor get, how to work with Cancun hair.

We are staying at an Adults Only All Inclusive resort which, to me, is the only way to have an actual relaxing vacation.  You save up before you go, you know exactly what you’re going to spend, and if you don’t like what you ordered, you can order something else without worrying about the cost.

I had this grand plan of taking a picture a day and kind of “scrapbooking” it.

But it turns out I have “lived in the moment” rather than “take a picture of the moment”.  I haven’t wanted to carry my phone around with me and we didn’t bring our camera and blah blah blah.  I guess scrapbooking each day is hard.

Steve has been taking pictures of the scenery which is fine, but not what I really like to look at.  I’d rather have pictures of US.  But we seriously haven’t taken hardly any together.  This one above might just have to be it for our Christmas card.

By the way, the TWO WEEKS IN MEXICO got a lot of attention from a lot of people before we left.

TWO WEEKS? they would say, all incredulous-like.

TWO WEEKS?! they would say, with wide-eyed looks and mouths agape.

TWO WHOLE WEEKS, AS IN 14 DAYS? they would say as if they were horrified.

Then we would get well, you don’t have children.  Which is true.  And I get it.  I know most people do, in fact, have children, and the thought of leaving them for that long is sad, and too hard, and who would watch them, and all of the logistics that go along with that.  I get it.

I feel like Kerry said it best.  One week GOES BY TOO FAST.

And the whole time you’re on vacation (or at least I’m like this) you’re thinking oh no, we’ve only got four days left!  Oh no, now we only have two days left!  Gosh darn it, it feels like we just got here and now it’s our last night!  And then the next thing you know, you’re home and it’s like you never even left.

It’s for our 20th wedding anniversary.

Steve is one of my best friends.  We get along really well.  We travel really well together.  We have a lot of fun together and we both really enjoy the concept of DOING NOTHING.

So that’s basically what we’ve done.

The days have just melted into one another and look like this:

7:30am Steve goes to the coffee bar and gets me a caramel macchiato or a white mocha.  He has no idea why he keeps waking up so early.  He is not a morning person.

We lounge around until 10am or so.  Then we dunk ourselves in sunscreen and head to the pool.

1:00pm  Float, read, repeat, and throw in a yummy daiquiri or mudslide for dessert

5:00pm Get ready for dinner (albeit, slowly and not in any type of rush)

This is where we meet a lot people.  Everyone hangs out at the Martini bar before dinner.  It’s in the main lobby and one of the bartenders, Hugo, is hilarious and puts on a show while he makes drinks.  He is fantastic!

Once, while sitting at the Martini bar, enjoying my glass of Chardonnay, we met a retired school principal from Arkansas.  He was a TALKER!  Like, I couldn’t get a word in edgewise and once I figured out I was meant to just listen, I looked at Steve in a can you believe this old guy? kind of way, and Steve winked at me, so we just let him talk.  In the beginning, I kind of liked him.  He said, in his opinion, that Kinder and First Grade teachers should get a salary AND A HALF because of how hard it is and how foundational and how we’re the building blocks and how we’re teaching them academics as well as just HOW TO BE A PERSON.  And I was nodding emphatically and thinking THIS GUY KNOWS HIS STUFF.

He asked me if I had children.

And I said no.

And that’s all he got.  He didn’t ask any more questions before he said what he said next.

He didn’t get any background information, he had no idea if I had had infertility issues, a failed marriage, a miscarriage, a heart disease, NOTHING.  He knew NOTHING about me.

He just proceeded to say WELL, IN MY OPINION, THE BEST TEACHERS ARE THOSE WHO HAVE KIDS.

Then he went on to say THERE ARE TONS OF KIDS RUNNING AROUND – JUST GO GET YOURSELF ONE.

I have no clue what my face looked like, but then he said no offense, that’s just my opinion.

And Steve, my sweet Steve, who really and truly wanted to pick this guy up and toss him into the nearest pool, said You have never seen her teach, she is amazing, her kids love her and her families love her, and she loves them, and she never stops thinking about school.

Most of that is true except Steve has never seen me teach so he really doesn’t know.  HA!

I just took everything the old guy said with a grain of salt.  It’s fine.  Whatever.  I’m on vacation.

Except I’m still kind of thinking about it.  OUCH.

Back to the daily schedule (I got a little sidetracked):

If you noticed, this means that I’m getting about ten hours of sleep a night, plus an afternoon nap.

Last week, we met a couple from Virginia, named Steve and Alicia.  They were ADORABLE.  We got along so great, exchanged information, and now are talking about meeting up on another vacation.  We hung out with them at the pool and went to dinner with them, too.  We also went into town with them to have authentic Mexican food.  SO GOOD!

We also met a couple from Scotland, Mike and Mellissa.  Mike is from Scotland and Mellissa is from South Africa (they met while working on a cruise ship!!!), and we love their accents.  I said I wished I had an accent and she said but you do!

We are now hanging out with them at the pool and going to dinner with them a lot, too.  We also went snorkeling with them on an excursion.

We are also using the word “quite” a lot.

Today is our last day in paradise.  We head home tomorrow.  I miss my Murphie girl and cannot wait to see her and hug her and pet her.  She is staying with Steve’s aunt and uncle and apparently does not miss us at all.

And that about wraps it up.

Two weeks in a nutshell.

I’m really worried we’ll get home tomorrow and it’s going to feel like we never left . . .

« All About Slideshows
Monday Motivation »