I know, I know, it’s so late, but I have yet to tell my bible study group that I can’t attend on Mondays because of The Bachelor.

And then I had to take Murphie for a walk.

And then I had to watch the whole show!  With one two cookies (homemade from our neighbors who were repaying us for some ribs we went sent over on Sunday night) and a cup of coffee.

Because I took Murphie for a walk and that was my reward.

The girls – in short shorts and tank tops – got settled into their hotel and then Juan Pablo showed up.  He handed the date card directly to Sharleen (by the way, I’ve been spelling her name wrong for weeks now . . . thanks for not caring since we aren’t really fans of hers anyway) and then she was confused and dumbfounded by the note.

Should I read it? she asked.

Then they kissed and she forgot all about her hang ups.

I was so grossed out by their kissing.  Sick, I tell you.  Just sick.  Bleck.  Stop.

Sharleen later told him (in a sort-of-one-piece swimsuit) that she would give up The Opera for him.

Yes.  That is all there is.  You two are not going to end up together, if I have anything to say about it.  And since I Talk About It Every Tuesday, well then, there you go.

That is all there is.  Especially because she said she wished she were dumber.

Honestly.  If half of you thinks this is wrong, then it is.  It is wrong.  You either like him or you don’t.   This back and forth-ing is driving me up a wall.

After the date, Sharleen went to talk to Renee because that’s normal this season, as well as expected, and Renee was the bigger person because instead of advising Sharleen to leave, or telling Sharleen she should know by now, or even hinting that she is not right for him, Renee convinced her to stay.

She is a better woman than me, that’s for sure.

Nikki got the next one on one and Juan Pablo took her to see his family.  Which is out of order for the show.  And not how it works.

Juan Pablo, this is not how it works.  First, you go to their hometowns, and then the final three meet your family.  If you need some help navigating, I will give you my number.

But maybe Juan Pablo didn’t understand and the language barrier got in the way?  I mean, what in the world?

He took her to Camilla’s dance recital.  Which I absolutely loved.  Camilla had a little solo and she was just absolutely adorable.  I mean, really.  She could have her own show.

Juan Pablo’s ex, Carla, was also there.   They didn’t make too big a deal out of it, but she was there.  As she should be because Camilla is her daughter.

I see Carla as the next Bachelorette.

So then Juan Pablo took Nikki to his office which is the Marlin’s baseball field.   Ain’t no big thing.

Now, before we go any further, let’s talk about Nikki’s attire.

First, she was wearing a black skirt.   And, maybe, you’ll need to go into your archives and fast forward or rewind to this spot of the episode, but when they showed Nikki from the back, it looked (to me) as if they were putting one of those square black boxes over her tush because she was naked.  Really.  I’m not kidding.

Here.  Look.  I took a picture for you after failing to find a picture on the internet.

The things I do for you people. 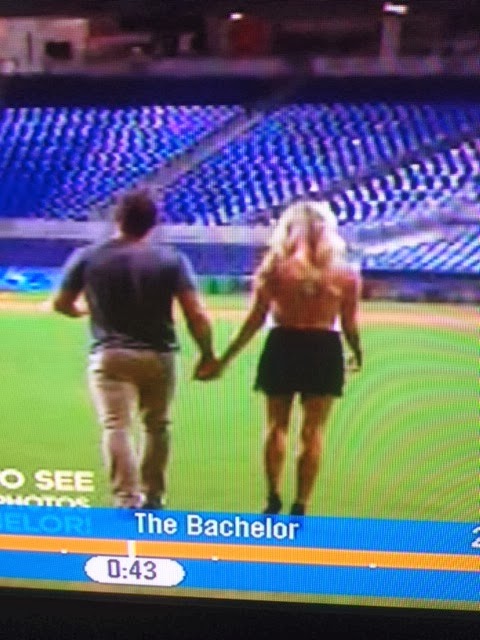 {Source – My own darn TV in my bedroom}
Now do you agree?  Black box over tush.  Except it’s her skirt.  So that’s just unfortunate.

Second, and probably the most important, Nikki was channeling some J-Lo at the Oscars action circa 2000. 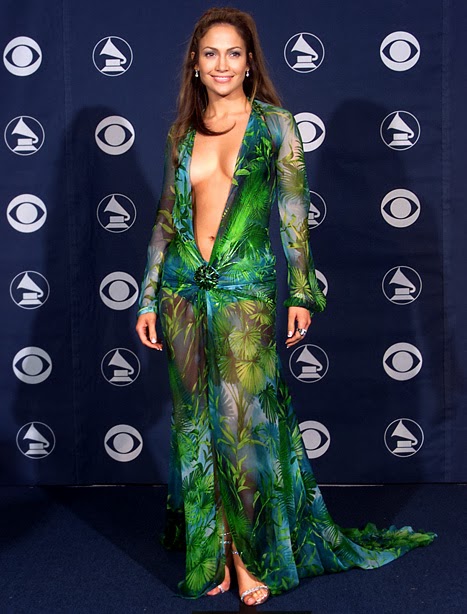 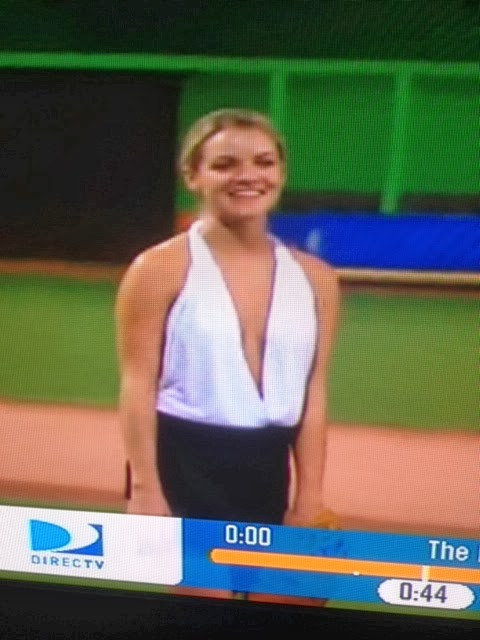 {Source – Still my gosh darn TV and
it’s still in my own bedroom}
And Nikki threw balls to Juan Pablo in this get-up.  And that’s when the censor people really needed to have their fingers on the black boxes that cover up naked things but, apparently, Nikki used whatever J-Lo used because no naked things happened.
Thank goodness.  Like I already told Clare on the Frolicking in the Ocean episode, this is ABC and not MTV.  Don’t get it twisted, girls.
Anywho, crisis averted (to poor Juan Pablo’s chagrin) so they ate a picnic lunch on the field and kissed and talked and Nikki wondered how she would fit in to his life and Juan Pablo liked all of the questions because she was wearing that top.
Back at the house, Sharleen talked to the girls about how conflicted she has been feeling and she told them she was going to be leaving.
Andi asked her (very sadly, I might add) if she was sure.
Don’t anyone talk her out of this!!  GIRLS!
I feel like it’s time for a song.
Let’s make the Let It Go song from Frozen into an opera for Sharleen.
Ready?
Let it go, let it goCan’t hold it back anymoreLet it go, let it goTurn my back and slam the doorAnd here I standAnd here I’ll goLet it go, let it goJuan Pablo never bothered me anyway.
Sharleen went to say goodbye to Juan Pablo and she cried.  And she actually made sense.  She didn’t think she could get to the place she needed to be in three weeks time.
She’s smart, that Sharleen.  I mean, one might even go as far as to say she is like a Panda Bear in a room full of brown bears.
Juan Pablo was upset.  He was ready to have a hometown date with her.  He cried during his interview about her.  He appreciated her honesty.  He liked it.  He has the utmost respect for her.
Well now if I don’t have the utmost respect for JP.
Oh, I’m telling you, this IS an Opera!!!  It is!  Let me wipe a tear before I continue typing.
Big sigh.  Wipe wipe.
The group date was next.
Juan Pablo picked them up in one of those little water planes.  All of the girls were totally fine with the mode of transportation and no one freaked out.  It was quite refreshing.
Juan Pablo was still digging Chelsea’s happy vibe.  But if I remember correctly, she barely made it past last week and then Ali left.  So I don’t have high hopes for little Chelsea.
Next, Juan Pablo pulled Andi aside and she broke down.
UGH.
But Juan Pablo calmed her down and she felt better.  She didn’t think he’d seen that side of her before but I’m having deja-vu . . . didn’t this happen in a vegetable garden when she was wearing a silly hat?  I think so, Andi, I think so.
His time with Claire was all about Claire’s dad and the video her father made before he died.  Sad.
Just sad.
But she licked her lips a lot and did a lot of mouth things so I was a little distracted.
Then Juan Pablo gave Andi the rose . . . which drove Claire crazy.  CRAZY.  And she cussed a few times, too, which was not becoming if I do say so myself.
Andi got to have a special one on one date with Juan Pablo since he gave her the rose.
They went to a club and danced on stage to some Latin music.  Andi can’t dance, but that’s okay because it was more like they were doing it instead of dancing.
I think I get it now.  Juan Pablo likes to dance.  For a reason.
Claire, Renee, and Chelsea went back to the house and told Nikki that they didn’t get the rose.  Claire was fired up.  She said maybe Andi got the rose because Andi needed reassurance.
And then Nikki said, “That’s so stupid.”
It was practically like when a first grader says, “You’re so stupid!  Stoooopid!”
So Claire chased after her to confront her.  Because Claire doesn’t like that Nikki gets to walk around acting like a big ole witch all the time.
They both interrupted each other and then one would say, “You just interrupted me.  Stop interrupting me.” and then the other would say, “You just cut me off.  Would you not cut me off?”
And then they had this intelligent conversation:
“Get out of my room.”
“Excuse me?”
“Get out of my room.”
“This is not your room.  This is all of ours.”
“Is your stuff in here?”
“No.  Did you pay for this room?”
“No.  Did you?”
“No.  Did you?”
“No.”
And on and on it went.
“You’re stupid.”
“No, you’re stupid.”
“Teacher, she’s not sharing Juan Pablo!”
Blah blah blah.
At the cocktail party, the tension was loud and clear.  Chelsea tried to engage Nikki, but she wasn’t having it.
It gave us a little glimpse of how Nikki might actually be . . . I’m not sure.  I think I like her and then I don’t.  I feel like she can be so pretty and oh, she’s a pediatric nurse, I like that, and then BAM.  She opens her mouth.
Oh, and remember that one time she wore a V-neck shirt and accidentally ripped it all the way down to her waist?
Yeah.
So the other girls (except for Andi) pretty much don’t like Nikki at all.

Then there was one point in which it was just Claire and Nikki on the couches by themselves and there was silence for about ten million years.
I am telling you right now, I would have broken that silence like there’s no tomorrow.  I would have said something.  I’m good like that.  I will just talk to anyone.  Seriously.
I don’t mind silence.  Not at all.  I like my quiet moments.
But . . . if you’re sitting on a couch with someone and you don’t have your phone or your laptop or your iPad or a TV in front of you, well for goodness sake, it’s called the art of conversation and it’s the polite thing to do even if you don’t really like the person because she’s dating your boyfriend, and it’s what people used to have to do in the old days like when I was in high school and we didn’t have all of the technology that we have today.  It wasn’t like I could carry my big ole Brother Word Processor/Acted Like A Computer Because It Saved Stuff around with me. 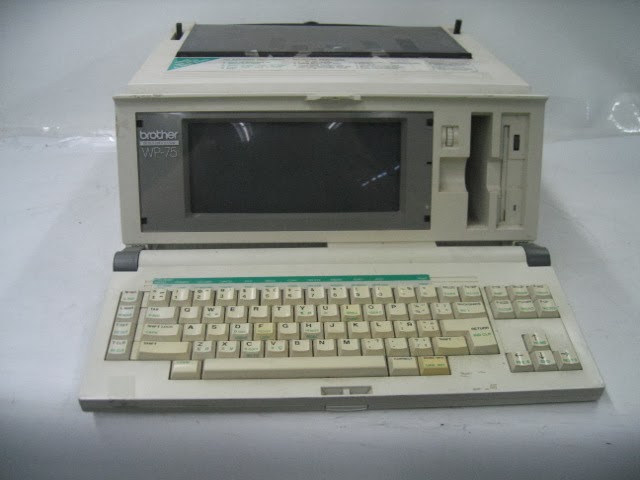 {source – PS They’re out of stock in case you’re in the market for one.}
Seriously, I wrote a novel or two on this thing and some movie scripts.
But you can’t carry it around.
So I had to talk to people.
I had to talk to people.
Bachelorettes these days!  Didn’t their mothers teach them manners???
Rose Ceremony:  I called it.
Goodbye Chelsea.
I told you.
Juan Pablo was super sad, but I don’t know why.  They did not have a connection.
They didn’t.
I think he just hates upsetting girls and maybe looking like a bad guy.
I would like him to stop crying already.
Please.
Just a request.
Just throwing that out there.
Final Four:  Andi, Renee, Clare, and Nikki.
Hmmmmmm……
Chelsea was very gracious.  Because she is a teacher.  The End.
Next week is a special Two Episode Two Night Special.
There’s a Monday night episode and a Tuesday night episode.  What are we going to do?
I think you know what we have to do.
I think we have to have a Talk About It Tuesday and a Talk About It Wednesday.
Pretty sure.
Just give me the go-ahead.
That’s all I need.
Someone give me the go-ahead.
I’ll wait.
« First Grade Morning Work Part 3
Five for Friday »