Happy Wednesday to you.  I apologize for the lack of teaching material lately . . . I promise I’m teaching.  I go to school every day.  And I’m awake through most of it.  And kids call me teacher, and they cough on me, and they tell me they have loose teeth, and they tattletale on each other, and they try to give me frosting during the middle of my teaching, rather than at the beginning of the day when we are supposed to check our backpacks which results in me saying, “Not right now, I’m teaching!” and so then I get an email from the mom hours later wondering why I don’t need the frosting anymore because she signed up for it on the donations list from our room parents and her child told her I didn’t want it.

Let’s be clear.  I wanted that frosting.  All I needed was a graham cracker.

But I was in the middle of teaching.

Anywho, all of that is to say that while I consider this a blog about teaching, The Two Day Bachelor Event has gotten in the way.

The Bachelor World Wide Tour moved on to Canada.

Catherine got the first one-on-one.  They had to play in the freezing cold snow on a glacier.  Even though it hurt.  I mean, mister big gigantic larger than life Sean said it was brutal.  But they sucked it up and made snow angels.  And did handstands.

Later, when they were cuddling in an ice castle, Catherine opened up to Sean.  He gave her the rose and all was quiet and well.  It felt as if they hurried up the editing of that date so they could get to the big time drama on the group date.  I can picture them in the editing room.

“Nothing is happening in this scene.  Let’s cut to the good stuff.”

“But it’s not long enough.”

“That’s fine.  We’ll just have another commercial and move on.”

Group Date:  Daniella was included in the group date which meant she was THE ONLY ONE that hadn’t been on a one-on-one.  This meant tears, and woe is me, and why why why, and I could go on and on, but you get the jist.

Instead of volleyball or Montana relay races, they went canoeing (What’s up with the canoes?  I definitely do not approve of this mode of transportation.) and then they were told that they were going to do the Polar Bear Plunge.

Sean and the rest of the girls just ran in and did it.  Like it was no problem.  There were some high pitched screams, but they just did it.  Snap.  Afterwards, most of the girls jumped up and down from the adrenaline rush . . . hooting and hollering and screaming because they were so excited and proud of their accomplishment.  The accomplishment being that of submerging yourself into freezing cold water.  It rates right up there with my accomplishment of not eating an entire sleeve of Girl Scout Peanut Butter Patties.

Okay, okay, but it wasn’t in ONE SITTING.

I had to get up to get some wine.

Anyways, Tierra wasn’t into the hooting and hollering because she wanted attention.  And there wasn’t any drama happening so she felt the need to make some happen.  So she started shaking and saying that she was cold.

Hmmm.  Let’s see here.  It was zero degrees and they all jumped into freezing cold water.  I’d say shaking and being cold are acceptable side effects.

I think the other girls were shaking and cold, as well.  While the rest of the girls bonded over their experience, Tierra was taken away in blankets and a wheelchair.  She also drank hot coffee and ate a sandwich.

Sean visited her and managed to kiss her through the oxygen tubes.  Yep.  OXYGEN tubes.  Apparently, oxygen warms you up.  Or you lose oxygen when you’re cold?  And you need to put some back?  I don’t know.  I’m not a medical doctor, but I might need to look into getting some oxygen for the next time I’m cold.  I wonder how expensive oxygen is?  It’s not like it’s available everywhere . . .

It was decided Tierra needed to recover so she was told to stay behind on the group date dinner.  Seeing as how she was so sick and all . . . and you can’t take oxygen with you to a dinner.

Wellllll that couldn’t last.  No way.

Cue the Scene.  Markers.  Take One.

Enter Tierra.  In front of the girls, she was fine.  But in front of Sean, she limped.  LIMPED.

Lesley had the best line of the night and I wish I’d thought of it:  We have a Tierra-ist on our hands.

Sean gave Lesley the rose.  This made Tierra extremely unhappy because she has been through a lot, you know, and it just wasn’t fair.

Desi got the second one-on-one.  Sean arranged a picnic for her, but in order to partake, they had to rappel down a 400 foot mountain.

Desi was freaking out.  I felt really bad for her.  I mean, it was just a picnic, for goodness sake.  What could have been in there?  Cheese?  A cracker?  I’m sure there was a McDonald’s close by back up at the top.  No one needs a picnic that bad, I say.

There were a few cliches about heights and conquering and blah blah blah.  Just use your imagination.

The evening was spent with Sean being forced to wear a sweater that someone picked out for him, and he felt obligated to wear it because he is the sweetest bachelor ever. 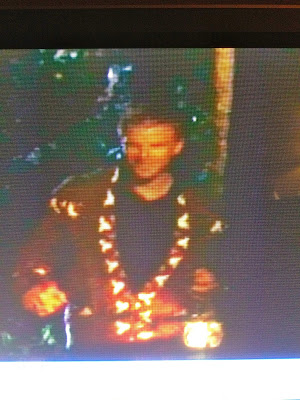 {Source:  My TV and Tivo paused after several attempts to find a good shot, including rewinding, forwarding, pausing, and trying again} 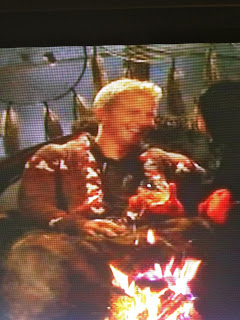 {Source:  My TV and Tivo paused after fewer attempts to find a good shot, including rewinding, forwarding, pausing, and trying again because now I’m crazy good at this and I am imagining all the things I can do on future TAIT posts}

Cocktail Party – all the girls were hoping that Tierra would go home.  I hoped so, too, but I doubted it.  I think ABC is doing this to us on purpose.  Just to mess with us.  This goes back to my theory that Sean gets to keep a certain amount of girls, but ABC gets to keep a certain amount who cause drama.  There is absolutely NO OTHER EXPLANATION!  (Like the sweater.)

AshLee let Sean blindfold her . . . and while I understood the whole analogy of losing control, all I could think about was that crazy chick in the beginning who was obsessed with 50 Shades.  What must she have been thinking??

Sean gave Tierra the final rose.  That rose where Chris Harrison comes out to say, “Ladies, this is the final rose.”  Because if Chris didn’t do that, we’d all be in the dark wondering and stressing about it.  Well, Tierra got that rose.

Daniella and Selma were sent packing.  Daniella never really had a chance.  And Selma shamed her family by finally kissing Sean for no reason at all.  Poor wittle princess.

Next week, they are off to St. Croix.

And Tierra better be sent packing . . . or I just might watch future episodes with a box of Peanut Butter Patties AND Thin Mints.  Take that, Tierra!

« Talk About It Tuesday
Filling Your Hearts »