Supposedly, it’s Saturday, but I seriously have no idea.  All I know is that the kids arrive in two and a half weeks and I am FREAKING OUT.  That’s all I know now.  My calendar and frame of reference to anything is “That’s the day before school starts.  I will be a nervous wreck.”  Or “I will have survived the first day of school.  I will be so happy and tired.”  Or “That’s the last weekend before school starts.  I’m going to be tho thad.”

At any rate, I went to school on Thursday and Friday with the hubby and he put new bookshelves together for me.  And while he hammered and drilled and did tough-guy things, I attempted to make sense of things and, instead, just made a gigantic mess of everything and left.  So that’s going well.

Let’s ignore all of that.  And get back to Vegas which is where I wish I was.

But we did.  And then we met up with some super good virtual friends of mine at the pool on the 4th floor!!!!

Well, not at first.  Because the hubby and I took the elevator to the 4th floor and found the pool, but we couldn’t find my virtual friends.  And it had nothing to do with the fact that I vaguely knew what they looked like and couldn’t recognize them.  It had more to do with the fact that when you are on an elevator and the doors open, you’re not just supposed to get off right away.  Apparently, elevators make stops at multiple floors for people who want to get on and off according to their own life and what might be happening at that time.  We just lucked out because they’re happened to be a pool on the 10th floor.

Yep.  That was us.  Once we figured it out, we got back on the elevator and paid close attention to the numbers lighting up as it passed each floor.  Take notes, people.  This is important Elevator Information that one must know.

Once we were on the correct floor, it was easy to find my virtual friends because one, some girls were calling out, “TEENY!!” and two, they had actually paid for Cabana Number 25.  And there were directions to Cabana Number 25.  A CABANA.  Which is now the only way I will be able to go to a pool in the future.  We chipped in because this cabana was amazing.  It even had MISTERS.  Not the boy kind.  The wet kind.   You can’t have everything.

I met Kelley of Teacher Idea Factory and Stephanie of Falling into First.  I felt like I already knew them because we talk online all the time.  If you do not know these girls, FOLLOW THEM IMMEDIATELY.  They have both saved my teaching life on several occasions.  And I’m not being dramatic.  This is true.

Oh, and if I’d had my way, I would not have been meeting them IRL (in real life) in my swimsuit and pony tail.   I would have been in Spanx and a sweat suit with my hair looking all cute.

Kelly and Stephanie were with another friend, Melissa.

So I introduced myself to Melissa and then I said, “Do you have a blog?”  Or “Do you blog?”  Something along those lines.

Um . . . it was hard to say anything after that, what with my foot in my mouth and all.

Melissa chose to forgive my stupidity and we all became fast friends!  Melissa just joined Instagram and we are going to support one another in this endeavor.  It helps to have a buddy, don’t ya know.  She is also a huge reality TV fan so we had lots of stuff to talk about.

Kelley is HILARIOUS.  Oh my word.  She just cracked me up.  She is sarcastic and makes funny faces.  And Stephanie is a sweetheart!  We talked a lot about houses.  And Colorado.  And blogging.  And everyone was so sad for me because I start school before anyone else.  I like it when people understand the boat I’m in, rather than saying it must be nice to have the whole summer off so quit your whining.  (By the way, it’s not the whole summer, buddy.  I’ll prove it to you.)   The girls bought candy and snacks for the Cabana including Cheetos!  I KNOW!!!!

Christy from Crayons and Whimsy joined us with her husband, too, so the guys all hung out again which was very helpful since I didn’t have to watch babysit  make sure my hubs was having fun. 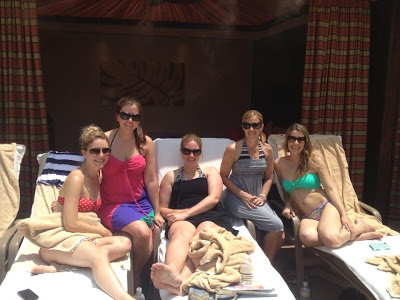 Kelley, Stephanie, Melissa, me, and Hadar
just outside of our Fancy Cabana.
Yes, that’s me trying to cover up as much of my
vericose veins as I could.
These young spring chickens have no idea what’s
in store for them.
We stayed at the pool for about five hours.  We ordered drinks and food and ate snacks and went back and forth from the pool to the Cabana over and over again.
I did not want to leave.  It was very relaxing.
Once again, I’ve gone on and on and we are not even at the Meet Up yet.
So that’s up next.  You can look forward to a story about me having a heart attack.  Well, not an actual heart attack, but one in which I overreacted to a situation in my typical fashion.
Until then.
PS  I caught up on the Bachelorette.  I have some quick thoughts.  These thoughts do not reflect the opinions of ABC or any other affiliate.
1.  Zak’s family was awesome.
2.  Drew’s family was sweet.
3.  Chris’ family was . . . odd.
4.  Brooks was wearing weird socks.  What were those?  He needs to cut his hair.  He thinks way too highly of himself.  And he’s a mama’s boy.  Just saying.
5.  Desiree can now just say, “I love Brooks” and that’s okay?  What in the world?  What?  So we’re safe in assuming he gets the final rose?  What kind of a show is this??  We are supposed to be on the edge of our couches and mattresses.
6.  I felt bad for Zak.
7.  She is keeping the one guy (Brooks) who hasn’t told her he loves her.  This is EXACTLY why Desiree is ticking me off and why she will owe me money for a new TV set when I throw something at mine and break it.
8.  I need the tears and the drama NOW and I want to know why she wants to go home.  I predict it’s because there are no good guys left and she wants a do-over.
9.  I’m looking forward to the Guys Tell All.  (And they better not cry.)
10.  I can’t think of a number ten.
« Vegas (Day One)
Vegas (Meet Up!!!!!) »