Okay, people, I better get this written before I forget everything.  And run out of time because Talk About It Tuesday returns tomorrow.  That’s right.  My bed and I have a date tonight.

Before I begin, let me tell you that I have just now joined the Nutella train and I am in love.  I enjoyed it with my apple today.  I do not understand how this could possibly be healthy, but I’m choosing to believe the commercials.  Do NOT leave a comment telling me that I am killing myself or my liver or causing my organs to shut down by eating Nutella.  It is now my absolute new favorite thing and if I don’t have anything within close promixity for dipping, why then, I just use my tongue.  DEE-LICIOUS.  And according to the commercials, it’s also part of a nutritious diet.  So there.

We stayed at the pool for hours on Tuesday and then we all went our separate ways in order to get ready.  Then the girls from the pool and I met up at a cute little place in the hotel for a pre-party drink to loosen us up a bit.  Shake out the nerves, if you will.  Quench our thirst, if you won’t.  We also met up with Tanja from Journey of a Substitute Teacher.  Yay – love that girl!!!!  (except for the fact that she is a young-in.  Ha!)

Then we headed to the meet up.  Which was in a big conference room.  And it was loud.  And there were people everywhere.  And I kept hearing, “Teeny!” which is really weird because I mostly go by the name of Kristin and sometimes Krist (my siblings insist on putting that final “t” and I don’t get it either, but it’s true) and the hubs calls me sweetie.  But no one in my real life calls me Teeny. So that was weird.  And, actually, not quite accurate seeing as how I’ve pretty much eaten my way through the entire summer, as well as on every mini-vacation I’ve been on thus far.

Right away, we saw Rachelle and Natalie from What the Teacher Wants — our wonderful hostesses.  I “borrowed” these pictures from their Facebook page.  You should go check out all of the Vegas pictures {HERE}. 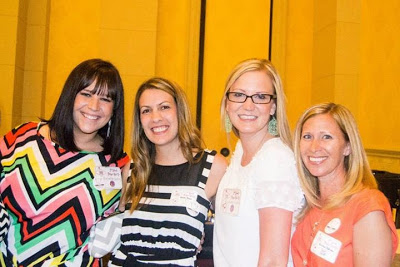 I’ve met Rachelle before so it was totally normal when she saw me and said, “SHUT UP!” to me because that’s how we always greet each other.  I cracked up!  🙂 I had not met Natalie yet — she is super sweet and adorable, of course!  I wish I looked like that in my glasses.  But I do not.  In any way, shape, or form.  Because I basically wear magnifiying glasses on a frame. 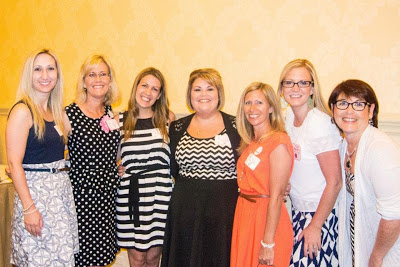 I finally got to meet Crystal from Kreative in Kinder (in the middle of the pic)!  I LOVE that girl!  She is the cutest thing ever.  Seriously.  I want her complexion.  Alessia from Mrs. Albanese’s Kindergarten is on the far left next to Linda from Around the Kampfire, and of course you know my bestie, Hadar.  On the far right is Fran, Kindergarten Crayons.  She is still as funny and loud and fantastic as ever!
I would also like to go back in time and tell myself to put my hand on my hip so that my arm does not look so ginormous next to my body.  Come on.  I know better!
I don’t have a picture of it, but I also got to meet Sarah from Waiting on the Butterflies!  I LOVE that girl – she cracks me up on her blog and it was so cool to meet her in real life.  I just wish we could have talked longer. 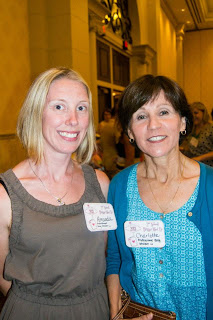 I met Charlotte, aka Professional Blog Stalker, and her new friend, Amanda.  Charlotte is on the right and she actually wrote “Professional Blog Stalker” on her name tag.  Haha!  Anywho, she was super sweet and nice and took stalking to a whole new level!  She really did know my whole life practically — it was hilarious and cool all at the same time.  She was honestly just so adorable and made me feel like I was really tall and important.  It was hard not to let it go to my head.  I tried really hard, but I failed and had to tell the hubby that he was married to a celebrity in case he didn’t know.  He said he didn’t know.  I tell ya.  Men.  At any rate, everyone needs a Charlotte in their life.  Thank you, Charlotte!!!!
I met a bunch of other people and I was in a bunch of pictures . . . of which I do not have access to because I was never the one taking a picture.  I’m sorry!  It was nuts in there!  My face felt like it was going to break because I was smiling entirely too much.
AND THEN.
Dun Dun Dun!
I turned around from a group or a person or a couple of people and I saw someone out of the corner of my eye . . . that I knew.
THAT I KNOW.
As in, IN REAL LIFE.
Like, IN MY REAL SCHOOL LIFE!
And this virtual life of mine (blogging, TpT, Facebook, Instagram, and whatever else they come out with that I get peer pressured into joining) is a SECRET.  A SECRET, I said!
So when I saw her, I basically screamed.  Out loud.  And turned around and ran the other way.
In other words, I did not cause a scene or act immature.  I acted the way one would normally act in such a situation.  Obviously.
Hadar said I turned white.
Stephanie said it was the funniest moment of the night.
I said, excuse me while I throw up.
So.
I eventually came out of hiding, hugged her, and asked her What In The Whole Wide World was she doing there in my virtual world.  Well, seeing as how she just retired, she is thinking of getting into blogging and selling as a way to stay creative . . . and she’s in the know because she’s really good with all this stuff . . .
And she has known all along that I’ve had a blog and that I’m involved in all this stuff.  But she never told me she knew.  And she didn’t tell anyone else that she knew.  So she’s a good secret keeper.
I say she should work for the FBI and stay creative that way.  I see a career in that.
Little sneaky sneak.  🙂
After the meet-up, our small group of girls went out to dinner and had to re-hash everything.  I had macaroni and cheese, in case you were wondering.
It was seriously an amazing night.  I want to go next year, for sure. I am planning on it!
We left the next day.  That’s it.  Home.
Now I’m in school mode.  Which means I’m having nightmares.  Really.  They started.  The last one involved a tour bus in which one side had ten first graders who were small and cute and adorable.  The other half of the bus had about fifty people, all different ages, including adults, acting like crazy hooligans.  They were all going to be in my class.
NIGHTMARE.
Especially since I knew some of the adults on that bus.  But I’m not naming any names . . .
Thanks to our sponsers for helping and giving away prizes at our meet up!
SDE (Staff Development for Educators)
TeachersPayTeachers
Erin Condren
MPM School Supplies
Clever School Teacher
CR Toys
Lovey Dovey Creations
Erica Bohrer
The Price of Teaching
DoodleBugs Paper
Valshi Boutique
Kim Sutton
Intelli-Tunes
Heidi Songs
Debbie Clement
Shari Sloane
« Vegas (Day 2 Afternoon)
Talk About It Tuesday »