I have a few things to discuss.

First, my vision has cleared.  This could be due to the major amounts of rest, lounging, and lunching going on around these parts.  And the complete lack of school, work, cleaning, and anything else related to doing something worthwhile with my day.  At any rate, my blog’s font is all back to normal on my end, too.  I am seeing what you all were seeing this whole time.  Bam.  It just happened today.  Out of the clear blue sky.  And I am an authority on the clear blue sky.  I spent an hour under it reading Best Friends Forever by Jennifer Weiner just a little while ago.  And I may or may not have been in a bikini on an old orange folding lounge chair.  And I know that I did not overreact by jumping up and down and running around because a killer bee came near.

Second, have you caught “Blue Lagoon – The Awakening” on Lifetime yet?  It’s fantastic.  I almost watched it two times in a row, but then I saw a Dance Moms Marathon.

Last, I sort of did a project yesterday.  Sort of.

I didn’t start it until about 6:00pm what with the remote control and dark chocolate covered Acai with blueberries.  Or as I like to call them fruit disguised as chocolate. 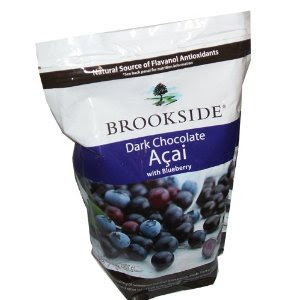 Get some.
And the hubby and I have decided they’re good for us.
So we buy two bags at a time.
My project involved the desk drawers in our kitchen.  Which are not really in a desk anymore.  They used to be.
Let me explain.
When we bought our house, it was non-existent.  That’s right.  We’re fancy pants.  We built a house.
Okay, okay.  Not with our own two hands.  And it’s different here in California.  We picked from three tract homes, decided on a lot, and then they built it.  Cookie cutter.  That’s what we have.
In the model, there was a built in kitchen desk.
In our house, there was empty space.
So my handy husband built me a desk our first week living here.
And then a few years later, I kept saying that a spot on the wood floor next to the desk felt warm.  I said that for a few months.  And then finally I was heard.  Turns out we had a bad pipe under our house.  Or pipes.  Or plumbing.  Or what have you.  We didn’t know.  We don’t go under the house that often.
So we basically gutted the whole first floor and rebuilt.  And now, instead of a kitchen desk, we have a
WINE REFRIGERATOR
I know.  Talk about fancy pants.  And heaven. 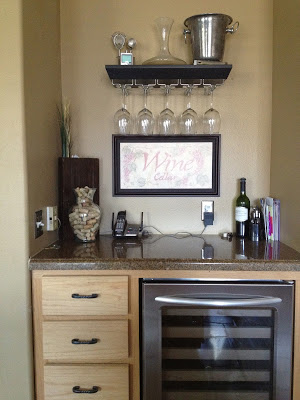 {Source – My Kitchen}
I’m talking about those drawers on the left.  There are four of them.
Some might call them junk drawers.
But that just hurts my feelings.
So I call them desk drawers.
And they need to be organized because they are full of junk  important things.
Here’s something I found on Pinterest. 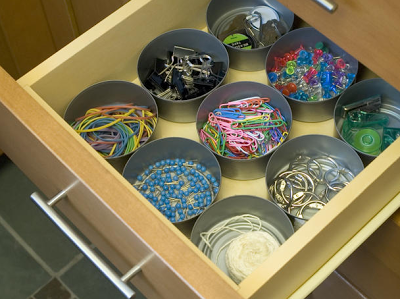 {source}
Those containers are TUNA CANS.
I happened to have five in my super clean pantry.  I opened all five.  Gave one can to Syd with her dog food (and yes, I looked it up and it’s okay) and dumped the rest.  Don’t tell.  I know there are hungry people everywhere.  But I needed to do this.  Right then and there. 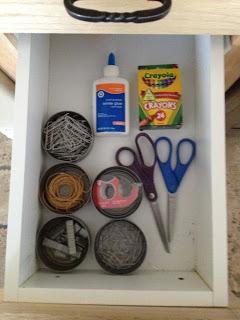 This is my version.  Five cans does not look as nice as nine cans.  And there was no tutorial on what to do with scissors, glue, and crayons that don’t fit in tuna cans.
Oh, and also I didn’t find a tutorial on how to get rid of the tuna smell.
Here’s the next drawer. 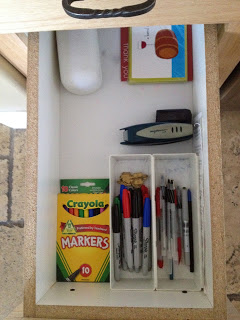 And here’s the last drawer. 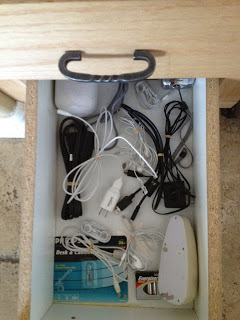 Seriously, this is way better than it was.  I rubberbanded the cords (I got the rubberbands from the tuna can two drawers above) and everything.  But I seriously need some square tuna cans or something for this mess.  By that point, though, I was tired.  I had been off the couch for at least an hour so no wonder.
The top drawer is the hubby’s.  I’m not touching it.  It is a disaster, but at least I don’t have to look at it.  I have trained him to put his stuff on the counter, open the drawer, and just slide all his stuff in.  Then close the drawer.  That last direction is super important.
That was my project.
Any ideas for all those cords??????
Any idea where my school to-do list is?  Because it wasn’t in any of those drawers . . .
« Talk About It Tuesday
Cubes »