Happy Tuesday to you!  I am happy to say that I have upgraded my clothing attire.  I am out of my pjs and into sweats.  Does it matter that I have on the same Boomer Sooner T-shirt that I had on yesterday?  And quite possibly the day before that?  I don’t think I slept in it . . . Scratch head.  Oh.  When was the last time I washed my hair??

I am just kidding about my Summer Vacation hygiene.

Let’s talk about the Bachelorette.

All I really want to talk about from the entire two hour episode is this: 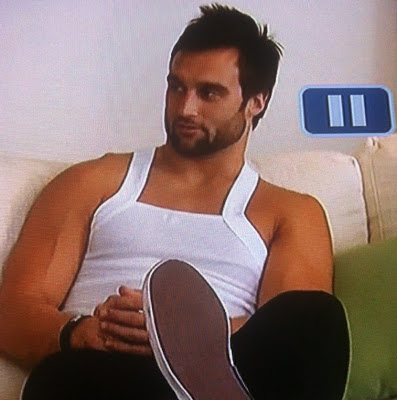 {source}
What in the world is Ryan wearing???  Is it a tank top?  Does he have his underwear on the wrong end of his body?  Or is this a bra gone wrong?  I mean, WHAT IS THIS????????  I do not understand it.
And can I just say that I like facial hair on guys.  I do.  I like some scruff.  I just do.
But Ryan’s facial hair?????
NO.
Gross.
I think I need to wash my eyes out with soap.
I didn’t take notes on last night’s episode.  This is due to the fact that my hubby was flying in late to an airport near my parent’s house.  So I went over there and hung out until an unGodly hour (at which point the hubs finally landed on nearby soil).  My older sister was at my parents, too.  Do you get the picture that we’re a close knit family?
So we watched it together.  Without Tivo.  (The parents did NOT watch it.  They stayed in the family room with the big screen TV and the Tivo.  We were booted to their room.  Where the TV is small.  And does not have Tivo.)
It was like being transported back in time.  I actually had to watch commercials.  No wonder my eyes need a good washing.
So I didn’t take notes.  I couldn’t.  Not with the piece of Chocolate Mousse Pie that my mom made with her own two hands and then made me eat.
So I don’t have too much to say.
Travis – Egg Boy – Goodbye.
He cried.
Sean – he threw a big log and then the log broke.  Emily liked that.  So did I.  Wink wink.
Emily kissed Arie, Sean, Jef, and Chris whilst on that date.  That is not gross or anything.  Her cold had cleared up.
Ryan –  I guess he’s worried now that the show is going to edit his stuff in such a way that he comes off looking like a big jerk.  I can’t wait for the Guys Tell All.  He made some great friendships along the way, you know.  I am sure it will be a big Bro-mance.
Doug and John Wolf – cried.  Cried, cried, cried.  It was a little embarassing.  Doug almost couldn’t get the words out.  And then she kept both of them.  By dramatically and heart stoppingly asking for an EXTRA rose from Chris Harrison.
I heart Chris Harrison.
I wonder what he and that girl were talking about outside?  Possibly basketball.  Or maybe the weather.  Or their conversation might have been about when in the heck was Emily going to come out and ask for that extra rose that they told her to ask for.
Next week, Arie is in big trouble because he dated a Bachelorette producer and now that producer is Emily’s friend.  And no one told her.  Whoa.  BETRAYAL.  Arie better watch out for his a** or Emily might go West Virginia-Hood Rat-Back Woods on him.
I mostly got the above information from US Weekly.
And there you have it.
So tell me, WHAT WAS RYAN WEARING????
« Monday
Another House Project »