Halloween wasn’t too bad with the crazy kids counting down the hours until trick-or-treat-time.  I forced curriculum down their throats until lunch, and then we did Art in the afternoon.  It was early dismissal, too, so that helped.

The day after wasn’t too bad either.

But I did feel a little sick after I came down from all the sugar.

I don’t know how I feel about that.  (Excited for the holidays?  Freaked out about the holidays?  In denial?  Looking forward to vacation?  My mind is spinning.)

I do know I’m looking forward to our long Veteran’s Day weekend.  We have Friday and Monday off so I have two four-day weeks in a row.  Plug your ears. 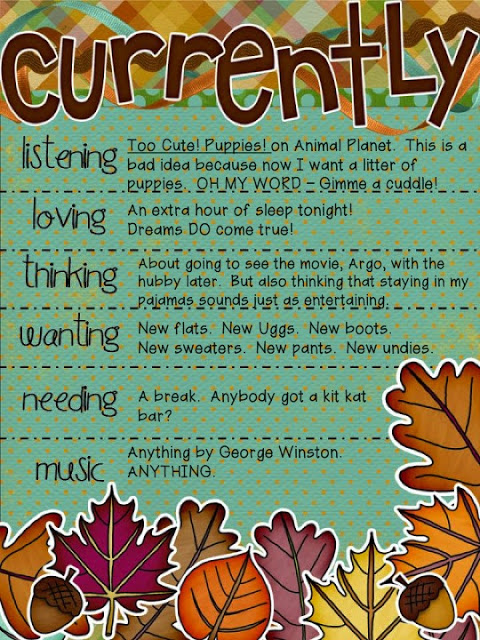 Well, most of my Currently is self explanatory.

**I want a puppy.  Or two or three.  But Sydney is old, grumpy, and hard of hearing (man, it sounds like I’m describing the mister), and has told us in no uncertain terms that she will not allow it.  So it’s not going to happen.
**An EXTRA hour of sleep.  I’ve really been looking forward to this.
**Argo looks good.  I’m interested.  But it would involve showering.  And we have been so busy lately that I’m enjoying my sloth-like appearance.  So I’m on the fence about going out.
**Well, I want a whole new wardrobe.  Obviously.  I would have added bras, too, but that just seemed like too much information.
**I’ve got left over Butterfingers, Baby Ruths, and Whoppers.  I would really like a Kit Kat bar.
**I am a music queen, if you didn’t know.  I’m all about the music. Ever since my husband convinced me to put all my music on an iPod (and let’s be clear: I didn’t do it until I saw another teacher do it, and then I figured the hubby might be onto something), I am basically a virtuoso.
I have about 90 playlists on my classroom iPod.  I know.  And they’re organized to the nth degree.
For example, I took all of our Houghton Mifflin stories on cd and imported them into my library.  So I have 30 playlists just from that — HM Theme 1, Week 1, etc, etc, etc.
I also have my Math songs broken down into playlists of Patterns, Shapes, Counting By, Counting On, Doubles, etc.  But they’re listed as — Math–Patterns, Math–Shapes, etc.
Yes.  I realize I have a problem.  I’m okay with that.  It’s not at the clinical point yet.  But I’d be up for joining a study if they were going to pay me.
Anywho, my biggest playlist is George Winston.  Even though I probably have six or seven of his cds, I put them under one playlist because I can’t choose a favorite.  I just love his music.  I had one little girl a long time ago that would get teary eyed when certain songs played because she thought they were so sad.  Either that, or she was imitating me.
And, recently, while playing my Native American music (yes, that’s right.  You name it, I’ve got it.) a little guy asked if I could turn it off because it was freaking him out.  He said the drums scared him.
I obliged and then he asked me to play one of my silly songs (under the playlist “Silly Songs”) instead.
Uh, no.
The Native American music went with our Social Studies activity. A silly song did not.
I know these things.  Like I said, I’m a virtuoso.
In my real life, I like alternative music the best:  The Fray, Mumford and Sons, The Script . . . and then I have this other side that likes Bon Jovi, Nickelback, Train, Gavin DeGraw, Goo Goo Dolls, etc.
I’m not ashamed to admit that I also love hair bands.
Especially the ballads.  Did you know that every rose has its thorn?
I also enjoyed the non ballads.  When you get a sec, pour some sugar on me.
In the name of love, be sure to link up with Farley and remember the rule of 3!

« Treats for Our Sweets
Choices and Numbers and a Sydney Story »