Normally, we get three weeks of winter break due to Furlough Days . . . but, sadly, we no longer have Furlough Days.  I am supposed to be happy about this turn of events because it means I get my full salary again, but it’s hard to be happy when you’re used to three weeks of winter vacation and now you only get two.  Not to mention, you get used to having a smaller salary.  You do.  Really.
I could get used to just about anything if it meant a third week of vacation.
Just saying.
Now, granted, we won’t have kids on the third week.
Those lucky duck rascals and hooligans get to have an actual third week of vacation.
I will be having trainings.
Of the Common Core kind.
So.  Anyway.  I’m starting my second and final week of winter break.
Let’s celebrate!  I’m here to announce the winner of my Edubucks Giveaway! 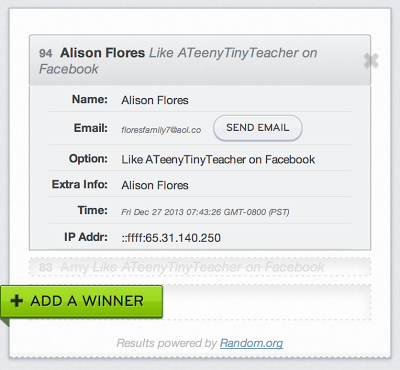 Congratulations, Alison!!  🙂  Check your email!
As far as everyone else is concerned, I’m here to give you a recipe.
A couple of you asked for my hubby’s fried taco recipe.  And if a couple of you asked for it, then I am assuming at least three more of you were mildly interested, too, what with all of those New Year’s Resolutions and all.  What’s for dinner?  Why, fried tacos!
Apparently, you would like to be positive role models in the lives of children everywhere, as well.
Here’s the recipe.  If you can call it a recipe.  It’s not really a recipe.  It’s just one way to take a tortilla and fry the heck out of it.
Get some hamburger meat.  We get 85/15.  That’s 15% fat, people, which is better than 20% fat, right?  See how we’re saving calories there?  Then follow the directions on the Taco Seasoning packet.  We prefer Lawry’s.  Although this post is not sponsored by Lawry’s, goshdarnit.
Then get some corn tortillas.  We like the pack that has several.  Left over tacos are also tasty delicious.
See what I did there?  I also gave you an idea for a meal that will last you two nights!
Spread some oil in a pan.  We like to use our griddle, which is as old as the hills, instead of a pan.  We also use this griddle to make pancakes (which we do not fry, but now I’m a little curious about it).  However, it is not a built-in griddle which has made a Built-In Griddle a top priority on our Dream Wish List For Whenever We Buy Our Dream House.  Also on that list is a live-in chef, live-in housecleaner, and live-in fashion guru.
But that’s neither here nor there.
We like to use Canola oil.  It’s healthy, I’ve heard.  As opposed to the kind of oil that you might use to start a car or something.
Place the tortilla down in the oil and spread it around a little.  Then put some hamburger meat on the tortilla.  Fold it over like a taco.  Fry.
The key to this recipe is filling the tortilla with meat while it fries.
Top with your favorite taco toppings.
We’re simple folk.  We like cheese.
Some people like hot sauce.  Salsa.  Tomato.  Lettuce.  Sour cream.
Whatever.
Pair this with some chips and my hubby’s fresh-made guacamole (no recipe for you there — it’s top secret) and you will eat like a king.
Oh, and don’t forget the Tums.
🙂
« Five for Fraturday?
Happy New Year! »