This week, I shared a story on my Instagram which, by the way, is why it’s called Instagram Story, but I didn’t save it to my highlights.  So now it’s gone.  And maybe you’re not an Instagram type of person.  Or maybe you’re like my mom and you don’t know how to get it to work.

Either way, I don’t want to forget my story, and I want to be able to look back on it when I’m old(er) and gray (just kidding – I will keep coloring my hair until I think blonde doesn’t look right and blue looks better), so I thought I should write it down.

Here’s my little feel good story for you.

I *finally* introduced Reader’s Theater to my class.  If you’ve been following me for any time at all, then you know that I write little two-part and three-part plays for my kids because a) I love to write and b) I can differentiate them according to my students’ needs and c) it’s just in my nature.  DRAMA IS IN MY NATURE AND IN MY BLOOD.  🙂  The plays really come in handy for all sorts of things, but I generally use them in centers.  However, I have also used them in guided reading, and with Big Buddies and parent volunteers.

For whatever reason, I just held off on starting Reader’s Theater with this class.  I honestly don’t know why I kept putting it off, but I did.  Normally, I would have started from the get-go.  Really.  I usually introduce plays before our very first round of centers.

Not so with this class.

When I *finally* introduced Reader’s Theater, I helped these three boys find a play that they all agreed on, I helped them get the hang of it, and then they were off and running.  They didn’t want me to hear them practicing, they said.  They wanted to surprise me at the end of centers, they said.

I mean.  They caught the bug pretty quick, if you ask me. 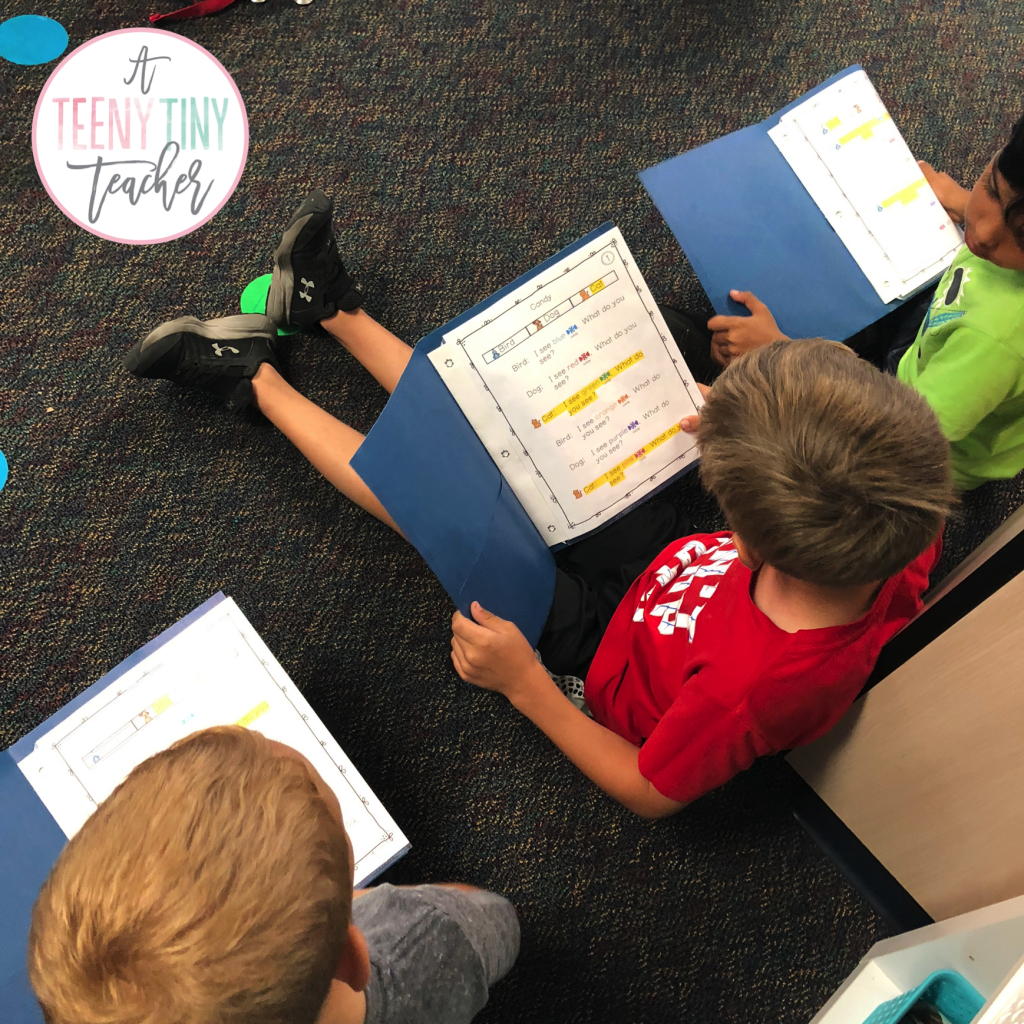 As they got up to “perform their play” in front of the class, I taught my kids how to say “Lights, Cameras, Action!”  And we did the whole Charades movement for “movie”.  Well.  Then my whole class caught the bug, too.

We say this every time?  I love this!

Will we get to go up in front of the class, too?

When is it my turn to go to that center?

I can’t wait to go to that center!

Can we take these to recess?

Can we do these for Fun Friday?

Well, over the next couple of days, the groups who went to the Reader’s Theater center did just as well.  We aren’t going to be winning any Oscars any time soon, but we are doing pretty darn good for this first round of centers if I do say so myself.

And I’m saying so.

It was another group’s turn to go to that center.

I don’t know what I was thinking when I put these three kids together, but I can assure you that I was NOT THINKING CLEARLY AT ALL.

Because this group of three consists of my student with autism, a language learner, and a little girl who has all of a sudden decided she cannot get up in front of the class to do anything, including her weekly Show and Tell presentation.  She used to do it, but a switch flipped and, now, out of the blue, she won’t do anything that involves getting up in front of the class.

Not during reading groups.

Not during informal situations.

Not during one on one running record assessment periods.

He will NOT read to me.

When I ask him to read to me, he ends up sideways on his chair, on the floor, under the desk, or petting my hair, or hugging me.  It could go any number of directions.  He is very capable, and we have made HUGE strides this year in all sorts of ways, but reading has just not been our thing.

And my language learner?  Well, she is struggling with reading.  She is learning the English language, for heaven’s sake.  She is TRYING, but reading is hard for her.  It takes lots and lots of effort.

So there you have it.

I put these three kids together because WHY NOT?  Seriously.

WHY THE HECK NOT?

They’ve been fine together up to this point.

They’ve just never done a play.  Or stood in front of the class together reading said play.

They came to my teacher table, quickly agreed on a play Outer Space (from this pack). 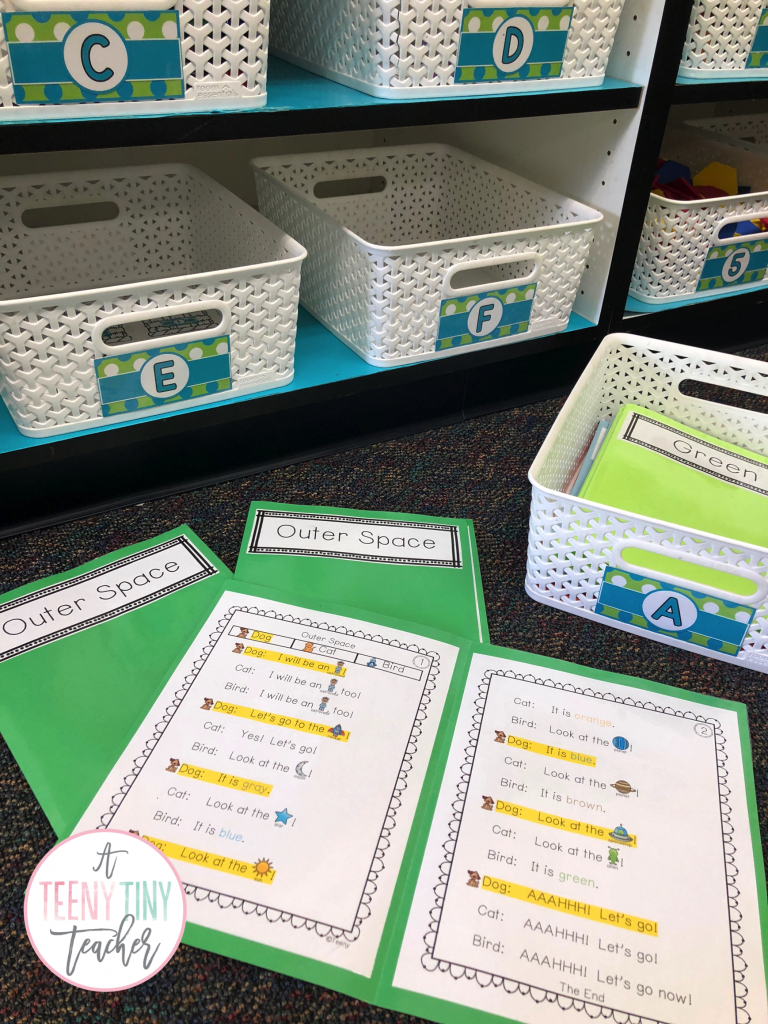 And then they read the play.

Even my student with autism.

Who I had never heard read EVER.

HE READ HIS PART IN THE PLAY OVER AND OVER AGAIN.

My language learner?  She caught on to the sentence patterns very quickly, used her Picture Power and looked at the picture clues, and READ IT.

I sat there in awe.

But obviously, I acted like everything was just fine and normal and this was not a big deal.  I don’t know how I haven’t won an Oscar every year at this point.  Where’s my Oscar?  Hello?  The Academy?  Where is my Oscar?  Hmmmm?

So anyways, these three kids were READY to perform their play.

Then centers were over and it was time for them to get up in front of the class.  And me, of little faith, thought THERE IS NO WAY THIS IS GOING TO HAPPEN.  MY LITTLE FRIEND WHO WON’T GET UP IN FRONT OF THE CLASS WILL NOT DO IT.  AND THEN MY LANGUAGE LEARNER WILL COPY WHAT SHE DOES, AND THEN MY STUDENT WITH AUTISM IS GOING TO BE UPSET.

What a way to end the day.  WHAT WAS I THINKING WHEN I PUT THESE THREE TOGETHER IN A GROUP?!

But you already know how the story ends because I already gave it away when I said This Is A Feel Good Story.

All three of them.

THEY GOT UP IN FRONT OF THE CLASS.

They were super quiet.  I’m pretty sure the last row on the carpet couldn’t hear them.

But they did it.

The read THE ENTIRE PLAY.

My aide (she is actually an instructional aide for my student with autism, not really MY aide) and I were looking at each other like . . . IS THIS REAL LIFE?  IS THIS HAPPENING?

And then my little one who won’t get up in front of the class?  Well, her mom teaches intervention at our school, and she just happened to come in my room during this time (I know this sounds made up or like I’m exaggerating, but I swear to you THIS IS TRUE, IT REALLY IS) and so she got to see her daughter up in front of the class!!

I was holding back tears!!

My class cheered for them!  They knew!  They knew this was a BIG DEAL.

It was HUGE!  We ended the day on such a high note!!

When I told this story on Instagram, I was holding back tears then, too.  I said I didn’t know why or how plays have this effect on my kids year after year.  I said I’m not saying it’s MY plays.  I’m just saying it’s plays, in general.

And I got the most thoughtful direct message which made the most sense to me!!  Are you ready for this?

“I’ve heard and seen time and time again that kids who don’t normally like to do things in front of others including read, thrive with theater.  It’s hard to put yourself, who you are, out there for others, and it’s especially hard for some types of personalities.  But in a play, you’re not you.  You’re a character and that feels much safer.  Just a thought about why your plays work so well for kids.” 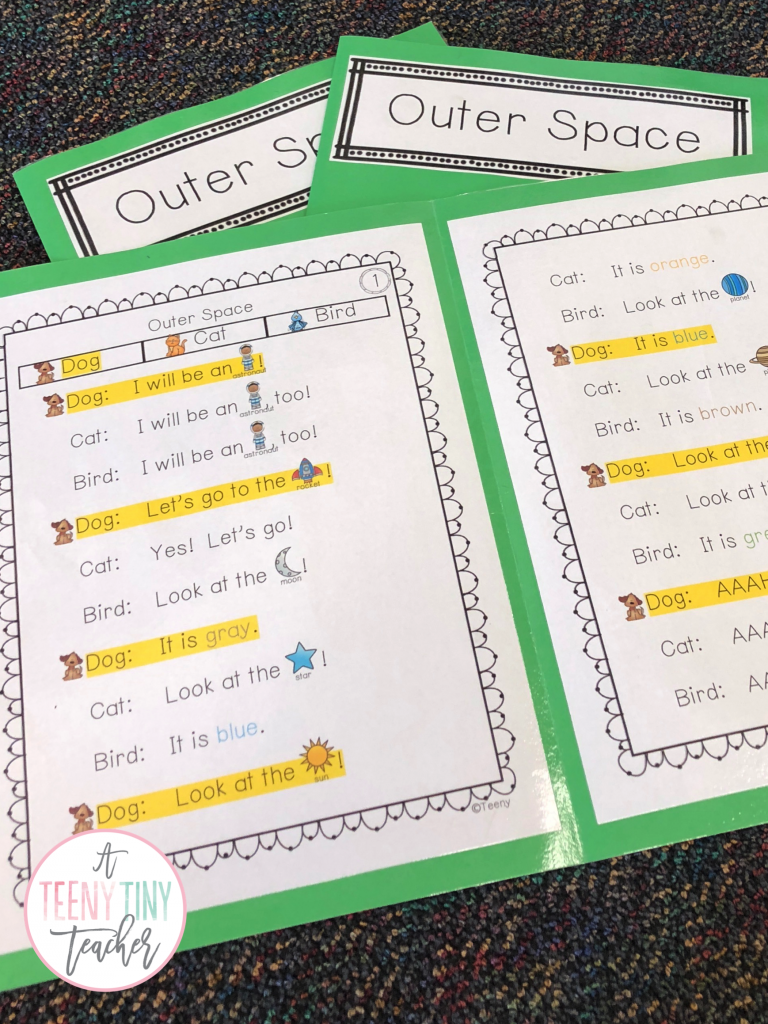 I am so thankful to be a teacher.

Click {HERE} to get “The Zoo” for Beginning Readers.  It can be used any time of the year.  Print it, staple it, stick it in page protectors, or make a folder . . . but try it with a reading or intervention group, or give it to a parent volunteer to read with a child.  Just try it!  🙂  When you click the link, it will take you to my store.  Click the green PREVIEW button under the picture and you’ll find it in there.  🙂