Once again, I skipped a week of blogging.

What the heck is my problem?

Well, I’ll tell you my problem.

One problem I have is that I don’t like my food to touch unless it’s supposed to.  For example, gravy on mashed potatoes is just fine, but gravy on green beans is not.

Another problem I have is that I don’t feel the need to make my bed in the morning, but I do feel the need to straighten all of the pillows on the couch, fold the blankets, make sure there are zero dishes in the sink, and put all of Murphie’s toys away before I leave the house.  I also have to open all the shutters.  The downstairs is always ready for company, but no one is allowed upstairs.

Another problem I have is that I watch a lot of reality TV and I really like it.

That doesn’t exactly explain why I skipped blogging, but it does give you an idea of the problems I face every single day.  😉

A couple of weeks ago, on Tuesday, November 13th to be exact, my dad texted me to let me know that my mom was in the hospital.

She hadn’t been feeling good (dizzy and short of breath) for a couple of days prior so she went to the doctor and the next thing she knew, she was being admitted to the hospital.  She had an abnormal EKG and the doctor said go straight to the ER.  My mom went to Taco Bell and then to the ER because, in my family, we like to eat, and eating is a priority, especially if you’re going to the ER and you know you’re going to be there for at least four hours which is the typical time people spend in the ER, in case you didn’t know.  I haven’t researched that figure, I’m just going off personal experience.  Oh, and my family LOVES Taco Bell.

So.  Instead of four hours in the ER, my mom spent the next four days in a bed on the second floor.

I’m going to make a long story short and get straight to it.

My mom had to get a pacemaker!

Now we both have heart issues.

And here’s what I’m thinking.

If you’ve been reading my blog for awhile now, then you know that a few years ago, my mom broke her femur.  I told a story about how, when I was a little girl (a first grader, to be exact), I broke my arm and my parents INSISTED and STILL INSIST that it was just a fracture.  This is because they left my siblings and me ALONE IN THE BACKYARD so that they could go ON A WALK.  And by the way, our backyard backed up to a BAYOU in Houston, TX, where water moccasins lived.  But sure.  Leave the kids alone.  I mean, my older sister was the ripe old age of EIGHT.  She appeared tall for her age, too, so I’m sure that made her look even more official.

This is back in the olden days when kids went outside to play and scattered in a bunch of different directions, and the parents didn’t know where they went and just said be back in time for dinner, and/or your mom went outside and blew a whistle which was the signal for dinner’s ready, time to come home!

The whistle example is from my own childhood.  True story.

I think my mom has been trying to ONE UP ME all my life!

She can’t just break her nose or her elbow.  Nope.  Let’s break the biggest bone IN THE ENTIRE BODY.

She can’t just have a little arrhythmia and need a little medicine.  Nope.  Let’s have surgery for a PACEMAKER.

I don’t know what’s next.

I still have floaters in my right eye.

I took some personal days so that I could be with her in the hospital and keep my dad company, and my older sister was there, too.  One thing we helped my dad with was packing her a bag.  We had to help.

BECAUSE YOU GUYS.  The first time my dad tried it, all alone, without us, it didn’t go so well.  My mom said she wanted her brush with the blue handle.  My dad called her from the house and said but it doesn’t really have any bristles and my mom said but does it have the blue handle?  and my dad said yes so my mom said that’s the one, bring it.

He packed her a blue handled pumice stone, her foot brush, the thing that removes calluses off the bottom of your feet!!!  It did have a blue handle but OH HOW WE ROARED WITH LAUGHTER.  My niece, Ashley, cried with laughter.

You can’t really brush your hair with a pumice stone.

As all this was happening, Thanksgiving break was coming and Steve and I had a trip planned for Cabo San Lucas.  And as soon as we found out my mom was admitted, Steve said we’re cancelling the trip and I said I know and my mom said you will certainly NOT cancel your trip.

There was a lot of hemming and hawing, I just didn’t feel RIGHT about leaving, I needed to know my mom was safe and sound!  Well, she had her surgery on Friday and everything went great, and then she got to go home on Saturday which is when Steve and I left for Cabo, so everything worked out in the end.

Which means I went to Cabo for Thanksgiving Break WHICH IS ANOTHER REASON WHY I DIDN’T BLOG.

In Cabo, Steve and I basically SLEPT.

We had never been to Cabo before and let me tell you this — GO TO CABO IN NOVEMBER.  The weather was AMAZING.  Not too hot, not too cold, Goldilocks would LOVE it.  It’s absolutely beautiful there.

We went to a Secrets Resort which was really pretty.

See what I mean? 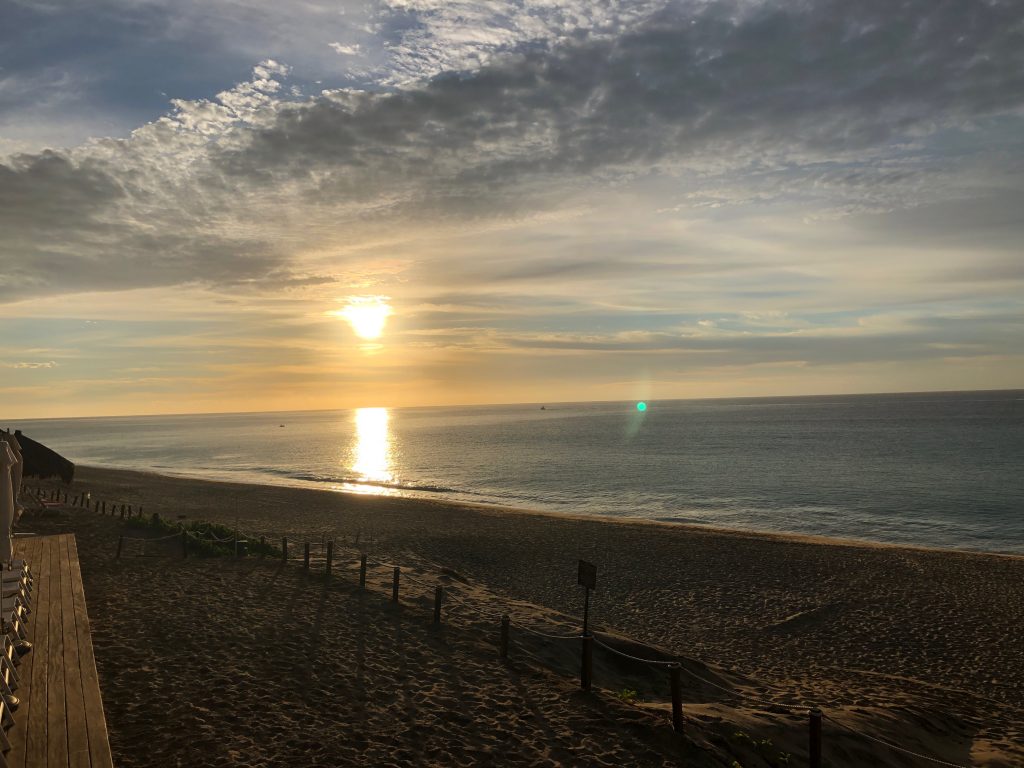 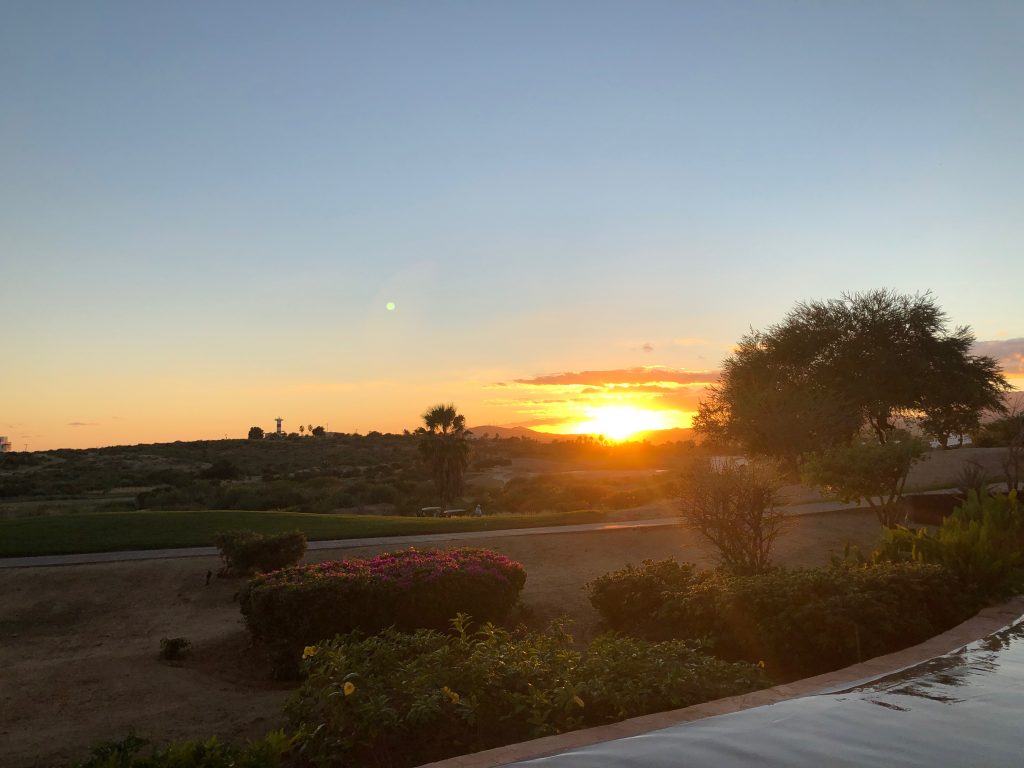 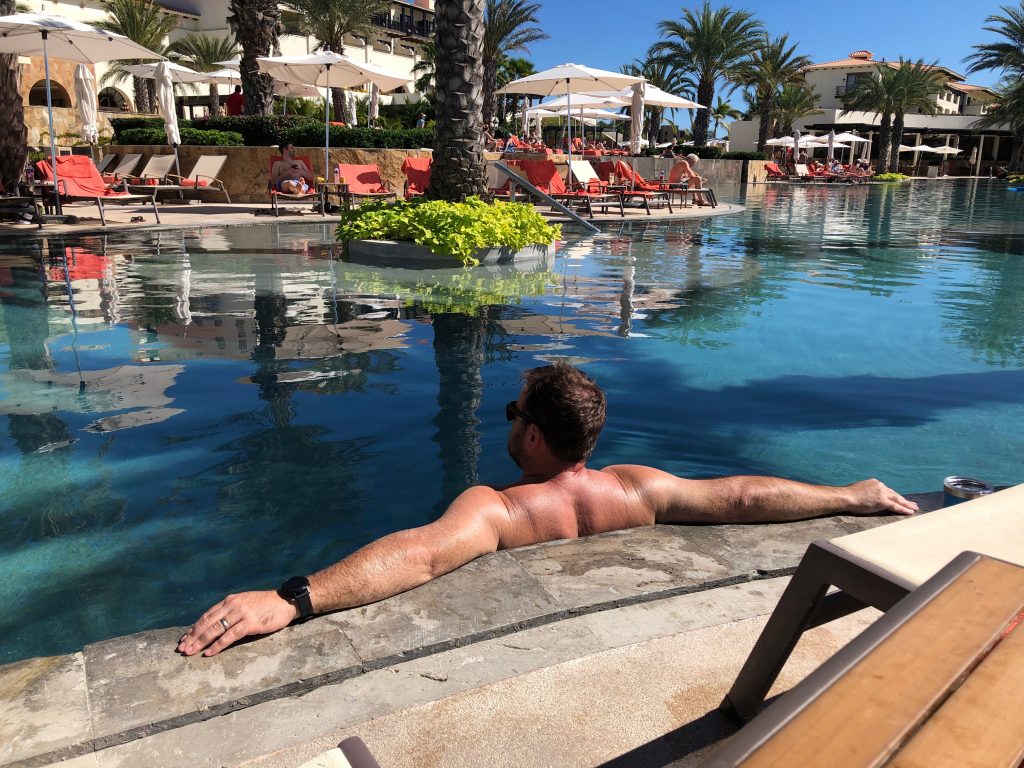 The resort was only at 50% capacity so that was really nice, too!

The food was just okay, but that’s sort of to be expected at all-inclusive resorts because they have to make sure it’s mainstream for all the people and not too spicy or whatever.  We spent time figuring out what we did like and then we ate that a lot.  Nachos for lunch every day?  YES.  What’s wrong with that?

Go to the little cafe to get a latte.  Take our coffee to the beach.  Listen to the people doing yoga (the yoga teacher was a little aggressive in her demeanor and not very zen like if you ask me so I decided to listen rather than partake) while we watched the waves.

Change into swimsuits and head to the pool.

Return to the pool for lounging, reading, relaxing, floating.

Go back to the room.  Nap.  Watch Netflix.  Read some more.

Get ready for dinner.

And then it was a new day.

We didn’t even go on any excursions.  Steve almost had me convinced we needed to get on a boat and go see the sunset, but in the end, we just watched it from the resort.

We met lots of really nice people.  Here’s how you meet people at a resort.

You say where are you from?

And if they say anywhere you’ve ever been, you say how much you like it or that you were just there, or that you wish you could visit there and then if they respond with where are you from, then BAM.  You’ve made a new couples-friend.

However, if they don’t really respond, then they are either on their honeymoon, rude, or traveling with other people and can’t be bothered with strangers.

We went to dinner with a couple from Chicago a couple of times (they were our faves and now we are Facebook friends), and we hung out in the pool by our room with our neighbors, and we sat in the jacuzzi with a couple from Colorado . . . so that is how we refer to all of them now . . .

Are those our neighbors?

And there you go!  You are now officially caught up.

How have YOU been?!