Happy Saturday, even though we lose an hour of our precious weekend and I want to do what Ellen (as in Ellen Degeneres) has suggested, which is move the clocks forward by one minute a day for sixty days so we can slowly adjust to this time change, and not be grumpy or so tired or whathaveyou. 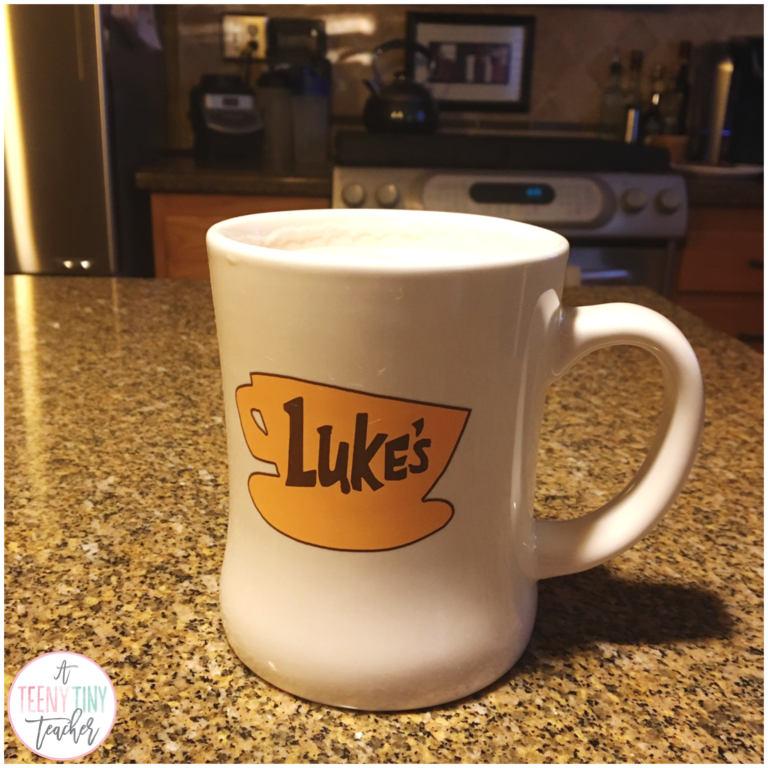 This is a mug from Luke’s Diner.

As in THE GILMORE GIRLS.

Lauren (A Teachable Teacher) gave this surprise gift to me because she recently went to the Warner Brothers studios and saw it and thought of me because she knows I was really addicted to the show.  She had already seen it (because she is young and watching it week to week, I’m assuming) and so I bugged her constantly with my thoughts on each episode as I watched it over Christmas break.   I’m sure that was just as fun for her as it was for me.

Anywho, we were meeting for coffee when she gave it to me.

And then when I got home, I made a cup of coffee in order to use my mug.  So that was a lot of coffee that day but who cares, there is water in coffee.

This mug was really the only thing that got me out of bed on Monday morning. 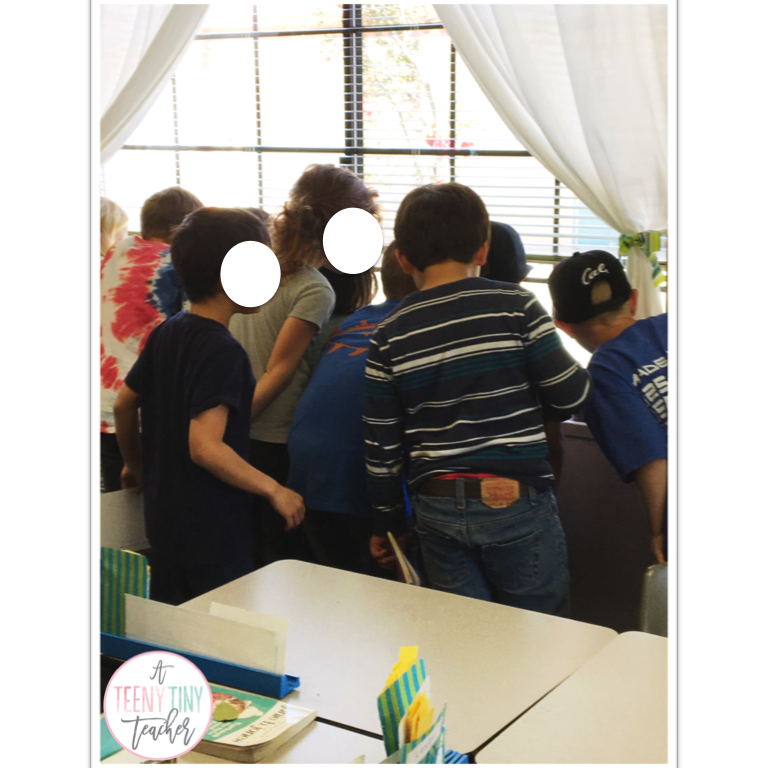 This is my class after one person happened to walk by the window and call out “He’s out of his hole!!”

And then all my kids were out of their seats.

Remember how I told you we have a little classroom pet and I thought it was a gopher (well, first, we were calling it a groundhog when we really meant gopher, but whatevs)?

Well, it’s not a gopher.

There was a bunch of debate between the teachers on the subject, let me tell you.

And my kids were adamant that it was a squirrel.

And they kept saying but he looks like a squirrel!!!

So I finally couldn’t take it anymore and I did what I should have done THREE WEEKS AGO.

We researched squirrels vs gophers.

It was very educational because we compared and contrasted.

Did you know there is such a thing as a ground squirrel?  Because there is.  They don’t live in the trees like other squirrels.  They dig holes.  Nice, round holes.  And they don’t cover them back up, whereas gophers dig crescent sized holes, and they do cover them back up.

The holes by our classroom are nice and round and open.

Ground squirrels are diurnal and gophers are nocturnal.  And we keep seeing this creature all day long . . .

We determined our class pet is a ground squirrel.

The other thing we learned is that ground squirrels live in colonies and gophers are more solitary.  Which means . . . we have several class pets.

And the one we keep seeing is probably not the SAME one every time.

Not me, that’s for sure. 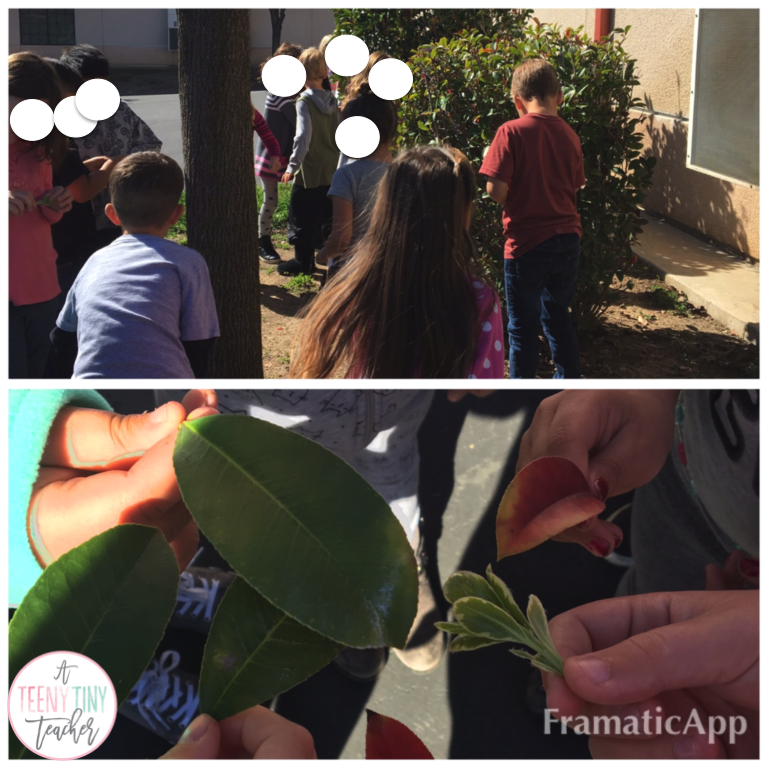 We are still studying plants so on this day, we went on a leaf hunt.

But it’s been a super cold winter for California and none of our trees had leaves.

So we found a bunch of bushes behind the library and I allowed each student to pick one leaf.

They were so excited!  It’s like I told them they could pick out one toy from Toys R Us the way they carried on.

Best Day Ever!  You’re the Best Teacher!  I love leaves!

Let me take a bow for this wonderful lesson that I decided to do on the fly.

We studied our leaves back in the classroom and realized that the leaves on one plant ARE ALL THE SAME.

It was eye opening for some of them.

Then they asked do we get to take our leaves home??

And I pretended to think really hard about it . . . I mean, someone said maybe we should put them back . . . so when I said sure, sure, let’s take them home, well.

Teacher of the Year right here. 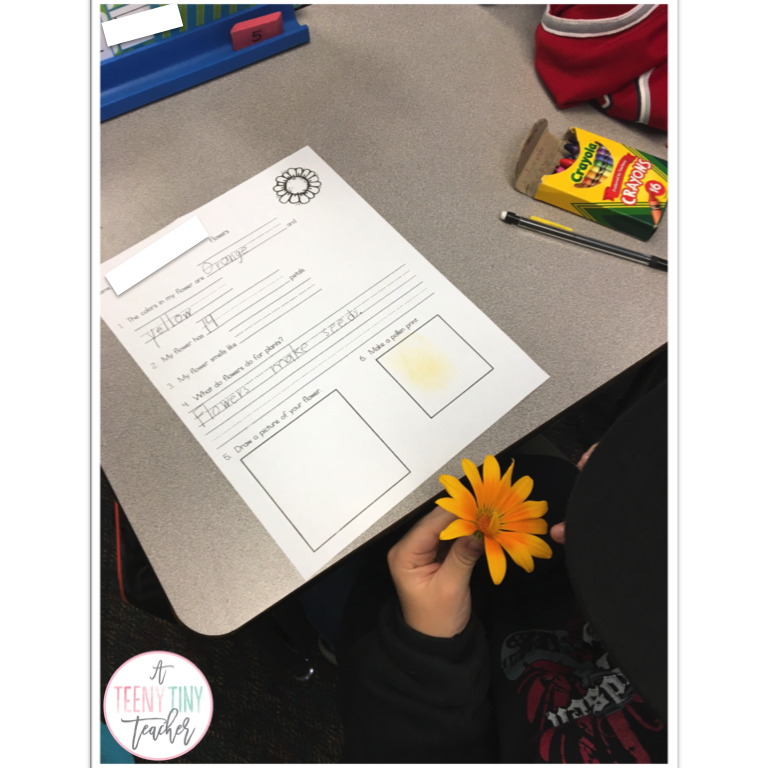 We did a lesson the next day with flowers, which were also hard to come by, but we found some by the third grade wing.  I allowed each student to pick one flower with the promise THAT THEY WOULD NEVER PICK A FLOWER AT SCHOOL AGAIN and again, these kids were thrilled.  THRILLED.  It’s like I gave them MONEY.

We described our flowers – how they looked and smelled, what flowers do for plants, made a pollen print, and drew a picture of it.

When I said they could take their flowers home, they tackled me. 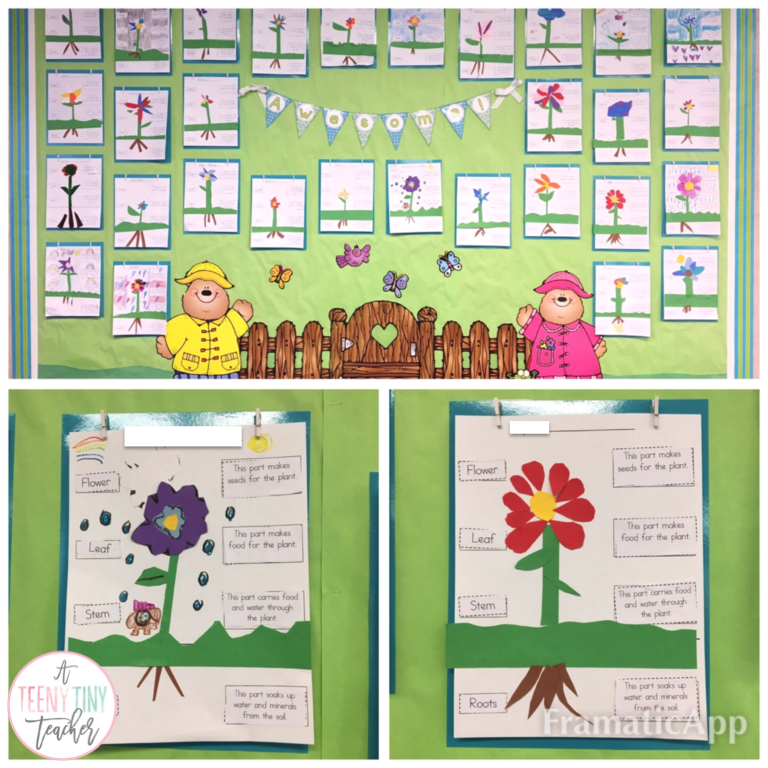 Here’s a little art project that we did.  I love how each flower is different and unique, just like my kids.  I put this on my Instagram and someone said do you really have 30 kids?

I feel like I’ve talked about it a lot, but maybe not.

Anywho, I LOVE LOVE LOVE THIS PROJECT.  If you’d like the labels and the template, click {HERE}.  I just cut up a lot of brown and green construction paper, and a ton of other color options for the flower, turned on some music, and let my kids go to town.

PS  I did have 31, but that sweet little girl left.  Circumstances in her life are sad and out of my control and we were all devastated to see her go.  🙁 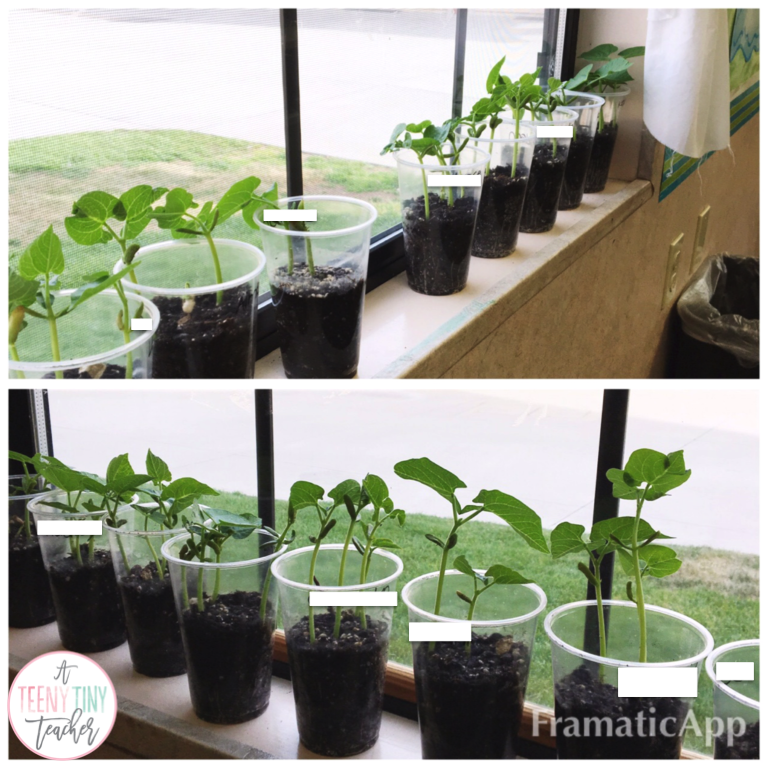 I’m telling you — I swear by the soil and the seeds.  I had two kids whose plants had roots but didn’t really have stems.  So I switched their out with one of the extras I planted (I planted five extra and they all grew) and by the time those two kids got back from recess, IT WAS A MIRACLE how their plants had grown.  A MIRACLE.

They couldn’t believe their eyes and neither could I.

Once again, if you need to see my planting “tutorial” (in quotes because it’s not really a tutorial) click {HERE}.

And that’s about it.

It looks like we only studied plants and ground squirrels this week, but I promise we did math and reading and writing, too.

And when I say math, I mean we did more than just count the petals on our flower.